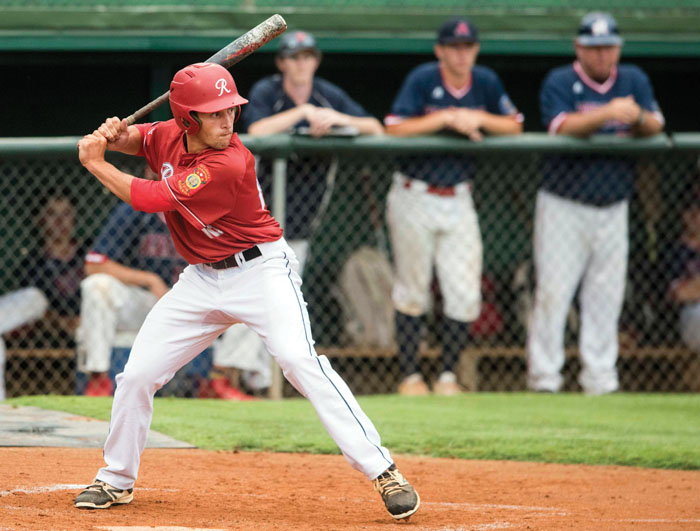 JON C. LAKEY / SALISBURY POST Rowan County’s Chandler Lippard (18) waits for a pitch during an earlier game this season at Newman Park. On Wednesday night during the team’s 9-3 win over High Point, Lippard was 2-for-3 with a home run and three RBI.

SALISBURY — It took all of three innings Wednesday night for Rowan County’s bloodhounds to pick up a scent of Greenville.

“We came out and got the job done. That’s all that matters,” winning pitcher Hayden Setzer said at Newman Park, where Rowan (30-1) won its 12th straight game and earned a berth in the state tournament scheduled July 20-25 at Pitt Community College. “They’ll be some tough teams in the states, but we have a lot of returning players who know what it takes.”

Rowan first will take on co-qualifier Randolph County (26-7) for the Area III title and a No. 1 seed. That best-of-three series begins Saturday night at Newman.

“You’ve got to be in it to win it, so I’m happy to be back,” coach Jim Gantt said. “We’ve probably got a bull’s-eye on us because we’ve won it the last two years. There’s a lot of good teams this year in the state. We’ll have to play well.”

Rowan played like last year never happened in last night’s clincher. Setzer, the only Rowan pitcher to lose a game this season, used a beguiling assortment of off-speed pitches to win his fifth game. He forced High Point to play the game at his pace, allowing only three hits and four baserunners in six innings before leaving with a 9-1 lead.

“Everything felt good tonight,” the tall left-hander said. “I was able to command the strike zone and not focus so much on baserunners, mainly because when there were runners on it was always with two outs. I just had to throw strikes.”

“He made us swing the bats,” he said after High Point finished 13-17. “It looked like his off-speed stuff to our left-handed batters really had them fooled. He pitched a smart game.”

Rowan jumped on losing pitcher Collin Best for three runs in the last of the first inning and three more in the third. Two walks and hit batsmen loaded the bases with none out to open the Rowan first. Brandon Walton’s groundout produced the game’s first run and Chandler Lippard’s two-out double off the wall in right-center field made it 3-0.

“Just a fastball up,” said Lippard, who has become a defensive whiz at first base. “I tried to get a barrel on it and drive it somewhere. This whole team is so confident hitting the ball right now.”

High Point’s Jacob Kohns sliced a run-scoring triple into the right-field corner in the top of the third, but Rowan responded immediately. John Owen lined an RBI-double to right-center, Tanner File lifted a sac fly to right and Best wild pitch gave Post 342 a 6-1 edge after three.

“We’ve struggled this year with giving runs back right away,” Shore lamented. “In order to beat this Rowan team you’re going to have to outhit them. Not many teams can.”

Rowan extended its gait in the fifth inning when Lippard drove an elevated 1-2 fastball from reliever Rob Sari over the left-field fence for a solo home run. An inning later Henderson Lentz steered a two-out single through the infield and scored on Walton’s base hit up the middle. Rowan’s final run crossed when outfielder Nick Gourd misplayed the ball in center.

“That’s been a big part of our success this year,” Gantt said. “Not only do we get some hits, but we’ve gotten some big two-out hits. That’s what those were.”

Setzer was spelled by Brett Graham, Brandon White and Walton, who retired High Point in order in the top of the ninth.

“We didn’t want to make to much of this game in our minds,” Setzer said. “We knew it was to go to the state tournament, but Gantt gave us some words before the game. He said. ‘The game doesn’t know how big the game is.’ Even though we’re going for the state championship, this was just another game. We just had to go out and win it.”

NOTES: Setzer had three perfect innings — the second, fourth and fifth. … Gantt will make his ninth coaching appearance in the state tournament. He’s got 498 career wins printed on the back of his baseball card. … Rowan is 10-0 in the past two state tournaments. … Rowan scored seven eighth-inning runs to rally past Northern Division champion Randolph County, 14-10, on June 1.