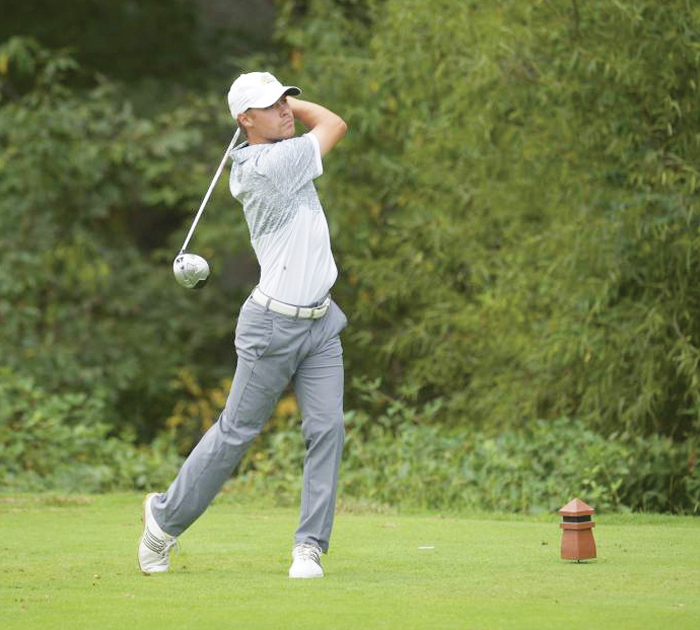 JOHNS ISLAND, S.C. —Salisbury’s Eric Edwards fired an opening-round 4-under par 68 and is tied for fourth in the 103rd Carolinas Amateur Championship at The Golf Club at Briar’s Creek.

The event, conducted by the Carolinas Golf Association, began on Thursday and it was a good day to be a reigning CGA champion.

The top three spots are held by 2017 CGA championship winners. The lowest round was posted by 21-year-old Julian Keur, of Summerville, S.C. Keur posted a sensational 7-under 65, just one shot shy of the course record set by PGA Tour player Russell Henley.

Edwards, a rising senior at George Mason University, played the par 3s very well on Thursday, with three of his five birdies coming on those holes. He had a par on the other par 3.

Edwards shot a 4-under par 32 on the front nine. He is tied with three other golfers for fourth, three shots behind Keur.

Starting on No. 10, Keur — who captured his first CGA title last month at the South Carolina Amateur Match Play — opened his round with six birdies in an eight-hole stretch on Briar’s Creek’s back nine.

“I was on cruise control there for a little bit,” Keur said after the round. “I was able to get at most of the pins and made 5 to 6-foot birdie putts.”

On the 205-yard par-3 17th, Keur rolled in a 50-foot birdie putt. “I thought it left it short,” said Keur, a rising senior at the University of Alabama-Birmingham. “But these greens are in such good shape it just kept rolling and rolling and I was fortunate enough for it to go in.”

With back-to-back birdies on the first two holes of his inward nine, Keur reached 8-under-par and talk began of a new course record. However, a wayward drive on the par-5 5th led to his only bogey. Four finishing pars capped Keur’s 65, good for a one-stroke lead. “It’s always good to start off low, but I know I’ve still got three rounds to go, there’s a lot of golf to be played,” he added.

Edwards, a rising senior at George Mason University, played the par 3s very well on Thursday, with three of his five birdies coming on those holes. He had a par on the other par 3.

Edwards shot a 4-under par 32 on the front nine. He is tied with three other golfers for fourth, three shots behind Keur.

Three consecutive birdies on holes 3, 4, and 5 kick-started Eades’ round. “It’s a long tournament, you try to find stretches where you can make a few birdies in a row to propel you through the round.” The 34-year-old Eades added four more birdies with just one bogey to finish the first round alone in second place.

The championship is a four-day event. After 36 holes, there will be a cut to the low 60 scores and ties. Entry is open to any male amateur golfer who has reached his 13th birthday by the first day of the championship, is a legal resident of North Carolina or South Carolina, is a member in good standing of a club which is a member of the CGA and has an active GHIN USGA Handicap Index at a CGA member club that does not exceed 7.4.

PORTSMOUTH, Va. — Logan Shuping, of Salisbury, shot a 2-under par 68 at The Eastern Amateur at Elizabeth Manor Golf and Country Club on Thursday.

Shuping, a sophomore at East Carolina and a former standout at East Rowan High School, is tied for 18th place — out of 168 golfers. He had four birdies and 12 pars during his first round yesterday.

J.B. Williams, of Danville, Ky., blistered the course with an 8-under par 62 and holds a two-stroke lead over Ben Reichert, of East Tennessee State, and Myles Creighton, who plays at Radford.

The four-round event resumes today. The field will be cut to the low 80 players and ties after today’s second round.