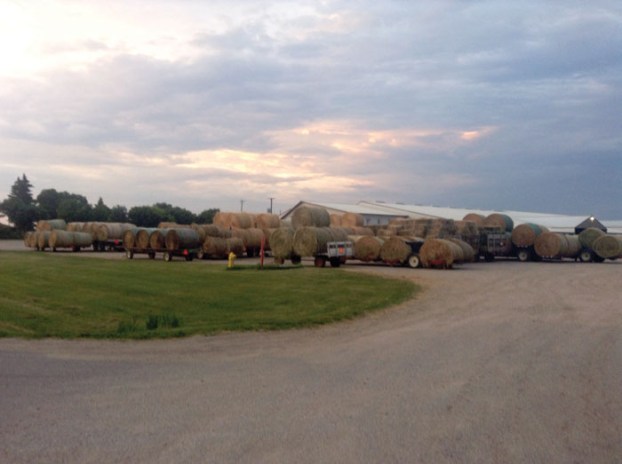 Everywhere I look, hay is being made. Hay is prepared differently in all these travel areas as opposed to how we do it at at home. Often, they cut it and wait a couple of days and bale it. They never use a hay tedder but usually use a rake. David Freeze/For the Salisbury Post I stopped to see the scenic overlook and hear about the Whetstone Valley history. The Dakota Indians moved here in around 1679 but remains and tools have been found from 7,000 B.C. Keith Lee told me about all of this. David Freeze/For the Salisbury Post

Tuesday night, while working on some planning and watching the All-Star baseball game, I looked out and saw a violent rainstorm happening.

Several aluminum livestock trailers were parked next to the building, and I thought the animals must still be inside because of all the racket.

I found out Wednesday morning that it was baseball-size hail beating down on Watertown, the heaviest right where I was. It rained and continued the storm until after midnight.

I went out the door Wednesday morning and felt the north wind right away. Another headwind on tap, and I needed to make good time.

To those who have ridden a bike in a heavy headwind, I can say that there is little that is more demoralizing. Knowing that nothing would change, I just put my head down and pedaled.

At one point, I made so little ground that I just lay down on the grass beside the road. It seemed I might not make 30 miles all day, much less in the morning, but  the bottom line is I did make 62 miles finally and arrived Wednedsay night in Sisseton, South Dakota.

Sisseton is a city on the Lake Traverse Indian Reservation.

There is not much else to say about the one town along the way. I stopped at Summit, where a truck stop is the first thing you see. It had everything and plenty of business. I sat down outside at some tables and didn’t want to get going again.

Along the way, I found what would have been close to $8 to $10 in change beside the road. One of the quarters was bent; I took only the quarters and left the rest.

I stopped at the fabulous Waverly Valley Rest Area, situated so that the entire property is an overlook from where the viewer can see about 40 miles, said Keith Lee, an information volunteer.

The view is of Coteau des Prairies (Hills of the Prairies), carved about 20,000 years ago by a massive glacier. Human remains and tools have been found in the valley dating back to 7,000 B.C. It is possible that this valley was one of the earliest inhabited locations of the Western Hemisphere.

I hope for better today with a goal of reaching Fargo, still heading straight north. If I make it, then the route turns east.

The owner at the Holiday Motel told me that it is often windy here but it is supposed to be much calmer today.

Hay making continues, now that it seems that the storm chances have passed. Corn is about waist high here but still looks amazingly green considering the lack of rain. Hog farms are also in abundance, easily recognized by the fragrant odor being spread by the brisk winds.

Today is an important day. It will take nearly 90 miles to reach Fargo and begin the sightseeing of this side of North Dakota, upper Minnesota and Wisconsin, the final phase of this grand adventure.

I need favorable winds to make this happen.

Some might be surprised to know that Roger Maris’ Museum is in a mall, which means I have until 9 p.m. to see it.

It wasn’t for lack of effort Wednesday, but I will plan for a successful and timely day to follow that makes up some ground again. I received some wonderful things to consider seeing from readers.

Some of the sponsors for this year’s ride include Gentle Dental and Dr. Tanya Williams, Father and Son Produce, Skinny Wheels Bike Shop and, of course, the Salisbury Post. Thank them if you get a chance for providing this adventure.

I’m ready for a good one Thursday and hope to get to tell all about it when me meet again. Thanks for riding along!