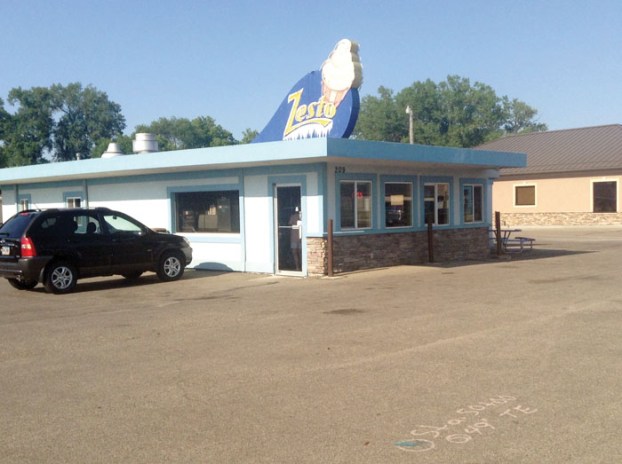 I had no idea that Zesto still was operating until I found this one tonight in Waterbrook, SD. This franchise was once part of downtown Salisbury. David Freeze/Salisbury Post

David Freeze: Working to get back on track Pedaling hard, trying to make up lost time from yesterday, I found a 12 mile stretch of freshly paved break down lane just ahead of me. Cautiously and without damage, I was able to make my way a little more slowly while continuing to ride. David Freeze/For the Salisbury Post

More than just about any other day of this journey, Monday bothered me for the lack of production due to various factors.

The reasons don’t matter, but I wanted to find a way to get rolling Tuesday and needed some good fortune with the wind.

Just after submitting Monday night’s story, I went out exploring the town of Pipestone.

A mile and a half from my room at the very good Arrow Motel, I went over to see what the park surrounding Pipestone National Monument was all about. I found some information and several quarry examples that contributed to the Native American Peace Pipe Quarries.

The stone itself has been used for many centuries for peace pipes and is also used on many other things around town, including building fronts.

I got to see more of the cool little town as I rode around before finding my way in the right direction. Right off, I made a wrong turn and took State Road 30 East because I am always going east, right?

Well not Tuesday morning, and I turned back to the west away from that impending sunrise. This road, like the others in Minnesota, had no cyclists. In fact, I wonder if they ever do. The traffic volume was light and everyone was courteous,

On into South Dakota yet again, I found the actual road improved at the state line. The gravel shoulder did not bet better for a while. Google and I decided to turn toward Flandreau, part of the Indian reservation by the same name. It was a beautiful little town to ride through, and I found State Road 32 to take me to Interstate 29, the gateway to Fargo, North Dakota.

Riding the interstate, I found no towns at all until Brookings, which seemed to be one continual bridge and overpass construction and because of it a few tight spots to ride.

Quickly enough, I was out of it on the way to Watertown. I made the miscalculation that I had enough water because the terrain seemed flat enough.

Also, I rode up on the breakdown lane completely covered in asphalted gravel, noted by a sign that said this was planned for the next 12 miles.

New asphalt before had been sticky and caused rocks to cling to the tires and clank against the fenders. It didn’t happen this time; riding on it was just a mild hindrance. I never saw any of the workers who had done this.

One notable subject that had several signs along the interstate was De Smet, home of Laura Ingalls Wilder. Wilder, of course, wrote “Little House on the Prairie,” which I will admit to liking as a kid. Her home was 39 miles away, too far on the bike.

I kept riding, eventually finding a series of slowing and challenging long hills that depleted my water supply. I made it to Watertown with a planned first stop for ice cream and water, but decided to wait until later on the ice cream. Last night, I happened to find myself near the US National Park in Pipestone, Minnesota where the town got its name. Indians for centuries came to mine this particular stone to make peace pipes out of and they considered the ground sacred. David Freeze/For the Salisbury Post

My motel was supposed to be another low-price one, and I was due to get burned. With five years of these adventures, I have become pretty lucky at hitting the good ones. This time, I blew it.

I headed for a place called Budget One Motel and got there to find that, yes, she had the cheapest price and also that her computers were down, so she couldn’t let me in the room. Also, despite rave posted reviews, she had no WiFi and, it appeared, plenty of other issues.

I called another motel, got the right responses for about $5 more in price and headed to the Travel Inn after 97 miles.

Good thing I got inside because a brutal thunderstorm with pounding hail came through for about 20 minutes. Tornadoes were possible Tuesday night and also another round today.

One thing is for sure, there are few places to go on a bicycle. The underpasses are miles apart because there are so few crossroads over the interstate.

Today, I will be back on the way toward Fargo on I-29 again, now less than 145 miles away. If all goes well, I will see the Roger Maris Museum and more of Fargo on Thursday.

Timing is perfect because of Yankee Aaron Judge winning the home run derby and having a legitimate chance of breaking Maris’ own Yankee homer mark. Maris participated in the All-Star game four times, just as Judge played in his first Tuesday night.

So back toward Fargo we go. I have lots of planning to do, hoping to get an idea how things will go for the last 10 to 12 days of the journey. I have lots of help chiming in with advice on what to include. Thanks to everyone who has offered their knowledge as a partner in this journey.

Join me again Thursday and, hopefully, I will have some things worked out. Tuesday was Day 30, and I can hardly believe it. See you for Day 31.

By Elizabeth Cook elizabeth.cook@salisburypost.com SALISBURY — The sidewalk project that has squeezed downtown Innes Street traffic and pedestrians since spring will loosen... read more