David Freeze: How many times can a man go back? 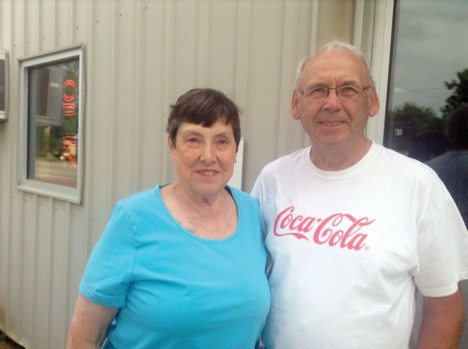 On a day that significantly tried my patience, by far the best part was meeting Orval and Bonnie Sundem in Hills, Minnesota. David Freeze/For the Salisbury Post 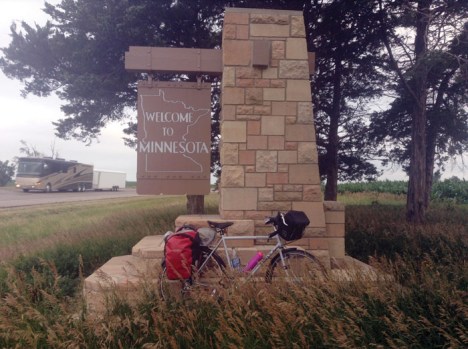 By far the most elaborate state sign belongs to Minnesota, my 44th state cycled in. Later, I was almost willing to give it back. There is a beaten path to this sign from people stopping to get photos. David Freeze/For the Salisbury Post 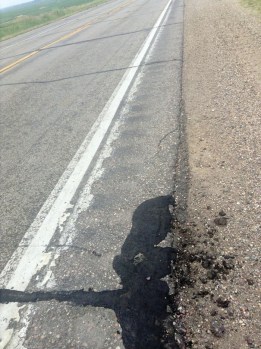 Minnesota has terrible roads for cyclists, but they have the fanciest state sign. US 25 was scary enough that I stopped riding on it and will change my route because of the rumble strips that take the whole shoulder. David Freeze/For the Salisbury Post

Have you ever wondered about how many times a man can go back, especially if it is to make something right?

I found myself at a place that I couldn’t have imagined early Monday. The day unfolded much differently than I expected, and I still can’t believe some of it.

Sunday night, I had the best room of the whole trip at the Four Seasons Motel in Rock Rapids, Iowa. The owner gave me ice cream.

But as soon as I opened the door, there was trouble. A stiff wind was already blowing from the north, meaning that I would have a headwind if it persisted.

I started out and turned into the teeth of the thing with the heavy wind and clouds rolling in. Right away, it was easy to tell that the pace would be slow.

Heading out on U.S. 75, I wanted to find the Iowa sign and then a new Minnesota sign. It was less than 10 miles, but it seemed the distance was going to take forever.

I got both signs, leaving me with an opinion that Iowa’s sign should be displayed more and that Minnesota has the nicest sign I remember.

I had ridden on 75 Sunday in Iowa, and it had a shoulder that was plenty good for riding. When I left Iowa and entered Minnesota Monday morning, all that changed. The only shoulder was 18 inches wide and was mostly taken up by rumble strips. So cyclists have to ride in traffic, and there was enough of it to be spooky in the least.

Plus the fact that I was going so slowly into the wind made it worse. I just walked the bike until the next county crossroad came and decided to form a new route.

I took a nice country road called 270 over to Hills, where I met Orval Sundem at his gas station/neighborhood store. I got some things to purchase, but Orval wouldn’t let me pay.

We talked for a while about possible routes and how far I could make it into such a stiff wind.

I also met Orv’s wife, Bonnie, who said, “We’ve been married 53 years, and I won’t say all of them have been good.” Then she smiled and left.

Orv thought my alternate choice of State Road 23 has shoulders, but I had to get there first.

I jumped on county roads 6 and 7 and finally battled my way to State Road 23, where I turned on what I hoped would be a safer road.

Along the way, I stopped to talk with a road crew who knew just about as much about their county roads as I did. One guy said, “There will be plenty of shoulder, but it will all be gravel.”

I hoped that wasn’t the case and I later found it wasn’t.

One thing that I didn’t expect was dozens and maybe 100s of the big wind generators like I saw in Canada and near Amarillo, Texas, last year. This area must be unusually windy, and those things were turning Monday. One was so close to the road that I could hear it making a huge “swoosh” noise every time the blades came around.

Turning on 23 going north toward Pipestone, where I hoped to spend the night, there was no shoulder in the beginning but a much better road and not much traffic. Then the shoulder gradually improved until I had a nice one through the little towns of Jasper and Ihlen and finally into Pipestone, the biggest town around here.

When I rode into town, I saw a Minnesota Highway Patrol car parked in the median. I decided to ask about the condition of the shoulders going north. There were two officers in the car, and what I got was a chirpy answer from one about how most shoulders are gravel in Minnesota.

I told them, “That is great, but you can’t ride a bike on the thick gravel, especially a loaded one. You force the bike into traffic and nobody prefers that.”

By that time, they just wanted me gone and the chirpy one said, “No riding on the interstate in Minnesota, you know that?”

The interstate just might be the safest place for the cyclists.

So Monday night, I was mapping out my new route and hoping for favorable weather to get back on track to Fargo, North Dakota, and a series of events tied to that starting point.

I had only 53 miles Monday, and there would be no ice cream Monday night. It wasn’t hot, and I didn’t accomplish as much as I hoped. The solution very likely will be my fourth return to South Dakota and use of its roads. I’m not far away.

I hear the “F’real” milkshakes are around home. I will be getting a few; they just need to add pineapple as an available flavor.

See you back here tomorrow. I hope it is a more positive and productive day.

Send those prayers when you can.