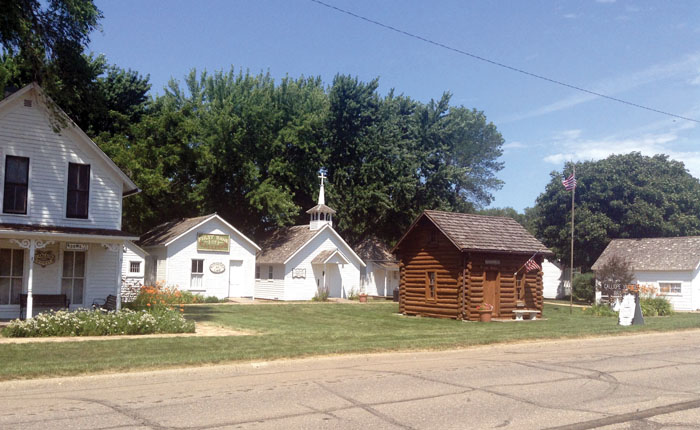 Freeze stopped in Hawarden, Iowa and found this sort of village of yesteryear all restored. The buildings were used from the 1860s to 1911. Photo by David Freeze, for the Salisbury Post.

As usual, I was ready to go out the door just as soon as the light was acceptable. A new cycling state was not far away and I was starting to believe that my whole plan for the bicycling trip was going to come together. I didn’t know much about Vermillion before yesterday, but besides meeting some really nice people, I discovered the University of South Dakota. The campus is beautiful and has about 10,000 students, the same as the population of Vermillion.

I left the downtown this morning and rode on SR 50 out to Interstate 29, where I immediately saw a detour sign saying for us to go one exit south. That wouldn’t do for me so I went one exit north and headed through Spink, South Dakota, and on into Akron, Iowa, for my 43rd state. It wasn’t quite that simple — in fact, not anything remotely close to simple. As I rode into town, I saw the South Dakota sign facing the other way but nothing at all on SR 48 about Iowa. I turned around and rode back and was convinced I didn’t miss it.

So after getting a breakfast biscuit, I asked the lady at the counter. She said, “I don’t know, it should be there. We make our son get his picture every time he goes into a new state.”

A few others got involved, including a wonderful conversation with the energetic and interested Brugert family of Akron, and I think at least one rode out to see for themselves. Anyway, no dice. But I had at least one more chance to find the sign and take a photo: Just up the road was a town named Hawarden, similar to Akron in that it was just inside the Iowa line.

I was assured that I could get my treasured photo there. I stopped at Casey’s General Store (a nice convenience store) and talked with a wonderful man about my whole trip. He agreed that I could find the sign at the river border and it was on my route anyway. I headed that way and rode out of Iowa again into South Dakota. Same thing! The South Dakota sign was there, but the Iowa sign was not. I rode back and double checked.

I had one more chance today as I was headed back into Iowa near a small community named Hudson. Nothing on either side this time! Tomorrow, I will have one last chance. My last 16-miles to Rock Rapids, Iowa, were on a road called US 75 and that will be the road I ride into Minnesota tomorrow. One last chance to see an Iowa sign that counts!

The only other notable town all day was Rock Valley, US 18. It was the only flat town of the day. So far, Iowa is not flat either, and I am hoping for Minnesota to come through. But tonight, after 87 hard miles, I will lay my head at the beautiful Four Season’s Motel in Rock Rapids. It is one of the best of the whole ride, priced right, and the owner gave me ice cream probably because she saw how I looked.

Besides meeting the Brugert family in Akron and the helpful guy in Hawarden, I mostly just rode. A plan is coming together in my mind for the rest of the trip. I have two shortterm objectives, both of which were on the original list. I want to see the Roger Maris Museum in Fargo, North Dakota, and the headwaters of the Mississippi just east a day or two east of Fargo. Then it is over to see for my first time ever my fifth Great Lake, Lake Superior. All of that should happen in the next week.

Just one more thing for tonight: I mentioned the Twin Bings partly because I can’t stop eating them. In fact, I had three today and they do not do well in the heat, making them messy to eat. The other thing is rather common all along my trip so far. “F’real” is a premixed milkshake that you put in this store mixer that does all the work. And they are very good! Already had one this afternoon.

With that, I will close for the evening and try to work something up for tomorrow. Come join us again and we will see what happens!