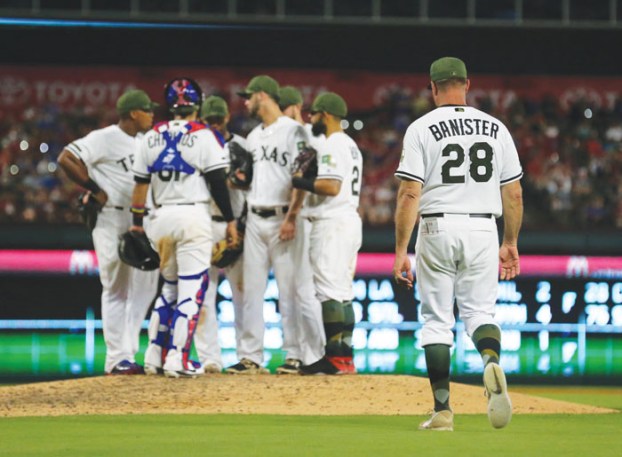 FILE - In this May 29, 2017, file photo, Texas Rangers manager Jeff Banister (28) approaches the mound during a baseball game against the Tampa Bay Rays, in Arlington, Texas. The average time of a nine-inning game this season is a record 3 hours, 5 minutes, up from 3:00 last year and 2:56 in 2015. MLB is threatening to impose new pace rules for 2018, even if players don’t agree. (AP Photo/Richard W. Rodriguez, File)

Pitch clock, limits on mound visits looming for MLB in 2018

NEW YORK (AP) — Count CC Sabathia as a fan who wants to speed up baseball games. When the six-time All-Star tunes in at home, he quickly changes the channel.

“It’s slow. It’s boring,” the New York Yankees pitcher said. “Man, it’s so hard to watch if you have no interest in it.”

The average time of a nine-inning game this season is a record 3 hours, 5 minutes — up from an even 3 hours last year and 2:56 in 2015. Management proposed three changes last offseason the union didn’t accept, and MLB has the right to start them next year without player approval: restricting catchers to one trip to the mound per pitcher each inning, employing a 20-second pitch clock and raising the bottom of the strike zone from just beneath the kneecap to its pre-1996 level — at the top of the kneecap.

Union head Tony Clark has said information was being gathered from players and he expects to discuss the proposals with management this summer.

“I don’t like the fact of somebody else telling me when I can go out and when I can’t go out, but I understand the point,” said Washington catcher Matt Wieters, a four-time All-Star. “There actually is an advantage to catchers and pitchers who can get on the same page without having to take the mound visit. So I like that side of it, of both people will have to put their homework in as opposed to one kind of walking the other one through the game.”

The 20-second clock is now in its third season in the high minors. It would reset when a pitcher steps off under MLB’s proposal last offseason, but now the league is considering asking that it merely stop and resume. If a pitch isn’t thrown within 20 seconds, a ball would be called. If the hitter isn’t in the batter’s box with 5 seconds remaining, a strike would be called.

Catchers head to the mound for a variety of reasons: discussing what pitch to throw, giving a pitcher a breather during a difficult inning or switching signals in an era where many are paranoid about opponents scrutinizing high-definition video to steal signs.

“There are some times we watch, we’re like, man, they just talk. Especially when it’s happening multiple times during an at-bat,” said New York Mets outfielder Curtis Granderson, a three-time All-Star.

Los Angeles Angels manager Mike Scioscia, a two-time All-Star catcher for the Dodgers, thinks the mound conferences can be vital.

“In some games, the catcher doesn’t even go out there. But when it’s needed, sometimes you’re out there twice in a situation because it’s going to help the execution and the decision-making process that a pitcher/catcher go through,” he said, “I don’t think anyone abuses it. … If you have to go out there and change your signs in a key situation, you should be able to do that.”

San Francisco’s Buster Posey, a five-time All-Star who starts at catcher for the NL on Tuesday in Miami, said his mound trips depend on the individual.

“There might be more later in the game where you’re in a crucial spot of maybe you have a young pitcher on the mound and you need to give him some reassurance or strategize a little bit more,” he said. “Sometimes I’ll run out and make sure we’re on the same page with the signals if the runner gets on second. I’ll usually do that and be back at the plate before the batter’s even ready. So I wouldn’t even consider that a trip.”

Detroit’s Daniel Norris is the slowest-paced in the majors among qualified starters, averaging 27 seconds between pitches, according to Fangraphs. Tampa Bay’s Alex Cobb is second at 26.6, followed by Kansas City’s Jason Hammel and Philadelphia’s Jeremy Hellickson at 26.5 each.

“If you talk about like 20 seconds to release the ball or something, I don’t like that,” Cobb said. “There’s so much that goes on, thinking as a pitcher. It takes time to weigh your options.”

Countdown clocks were installed in big league stadiums after Rob Manfred became commissioner in 2015, ticking down 2:25 between innings (2:45 for nationally televised games). Hitters were required to keep at least one foot in the batter’s box, with several exceptions.

The 20-second pitch clocks were implemented at Triple-A and Double-A, where agreement with the players’ association is not needed. The leagues with the clocks cut 12 minutes from their average game time from 2014 to 2015, double the 6-minute overall drop in the minors.

Part of the rise may be attributable to an increased number of pitches — and pitchers. In the major leagues, teams have added hard-throwing relievers and subtracted bench players. Teams combined to use 8.30 pitchers per game last year, up from 7.26 in 2002. This year’s average is 8.21 — and it climbs during the second half, especially after active rosters expand from 25 to 40 on Sept. 1.

Sabathia remembered how frustrated he got when he switched to a Red Sox game on television this year.

“I was watching between a commercial break of a basketball game,” he said, “and I only saw two pitches.”

Others think no tinkering is needed.

“The rhetoric needs to change from, ‘How do you speed the game up?’ to ‘Let’s just go back to enjoying the game for what it is,’” San Francisco pitcher Jeff Samardzija said. “If we can cut out a little bit of the commercial break, then so be it. Put some ads on the scoreboard on the TV in the top left corner, cut a minute out from commercials and I think we’ll be all right. But other than that, just buy another beer and enjoy the game.”

Braves bounce back in a big way against Washington

By Bobby Bancroft Associated Press WASHINGTON (AP) — Julio Teheran has been unbeatable in his road starts this season. Against... read more