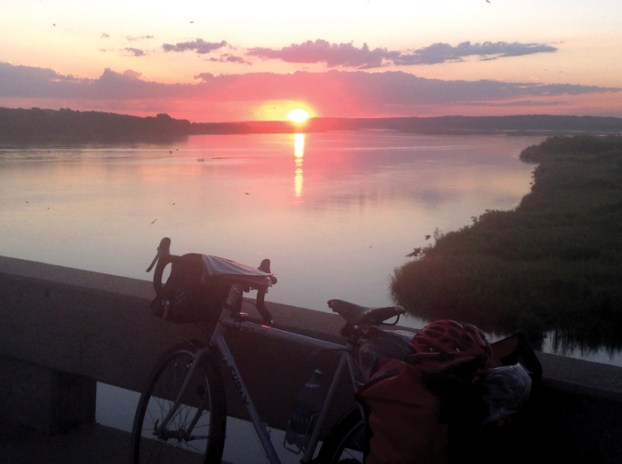 This was the spectacular sunrise over the Missouri River this morning between Nebraska and South Dakota. The Missouri is at least 10 times bigger than it was when Freeze saw it a few days in the Badlands. Photo by David Freeze, for the Salisbury Post.

David Freeze: Much different than what I expected!

Last evening, things got a little bit hectic. I found the town of Niobrara even though the namesake river had dried up. I got a great room at the Hilltop Motel and met the owners, Bob and Marilyn Janovec, who tried to persuade me into carrying salt blocks and I am not sure why either. After a local newspaper interview and trip to the grocery store, I got a chance to talk with the Janovecs about how I might proceed this morning. They were just two in a list of locals who said I should cross the Missouri bridge back into South Dakota and that the climbing would be easier in the long run. Not sure if it ever sounded quite right.

I thought it sounded like a great idea in concept and I loved the first sight of the magnificent bridge spanning the Missouri River. I got the intended sunrise shot over the river that I wanted and then headed back into the land of the buttes. You may kick me in the butt, but I did! I crossed that bridge, gradually climbed until I thought the bike couldn’t go any faster. I got rained on with a least four showers passing by in the very early morning. I knew Bob said this would be faster and I had faith. By the time I was at least 15 miles away, I looked back to my right and we were towering above the Missouri River valley far away. A moderate headwind had also started and I felt stuck in glue.

Over on SR 50, I saw a female cyclist ahead of me having trouble with a barking collie in the road. She came over to me and he left us both alone shortly. Marianne van der Weiden of Holland was two weeks into a planned two months of following the Lewis and Clark Trail on its way westward. She said she found it very hard in the beginning but was doing OK now. Marianne had the tailwind and she was really cruising. The last I saw of them, the dog was still following her but not agitated. Isn’t it amazing that the last three cyclists I have seen are an older American woman, a young German male and a Dutch woman. None of these are following the big name cycling routes either. I notice a huge amount of foreigners who are traveling America and they are always fun to talk to.

I kept battling the wind and the smaller climbing, but I began to think this was a good day to bag it on short miles and do some planning and laundry and maybe catch a nap. But I did not because I made it to Yankton with the road improving and the headwind slightly less. I was determined to get to Vermillion where Bob said would be a good place for tonight. There was lots of road construction, probably 15 miles, in my favor this time because I could ride on the part they were working on, the cars could not.

Earlier this morning, I stopped just briefly at a Casey’s Convenience Store in Springfield and asked about the candy, “Twin Bings.” Margaret from Casey’s knew all about them but only had one style. All women seem to get especially excited about this candy, but Margaret told me she had experimented with making her own. I bought two, ate one and saved the other. The Twin Bing is one of the best candies I have had.

Back on the road, I made it to Yankton, S.D., and stopped at the bike shop, which is part of the Ace Hardware Store. I needed a new water bottle holder because I had broke one a couple of days before. I met Hunter Rockne, a distant relative to Knute Rockne and famed Notre Dame coach, who sold me the stuff I needed in the shop.

It wasn’t particularly hot yet so I decided to complete the ride to Vermillion. An extra bottle of water and plenty of determination was the key to battling the wind. After just 72 miles, I made it to town here in Vermillion where I will spend the night.

But wait! I have more on the Twin Bings. There is a King Bing and a Patriotic Bing too, both of which I got from Brittany Hanson and Tessa Musil at the convenience store across the street. Both girls are from Vermillion and were proven experts on the Bings and enjoyed the discussion about my bike ride. They had no large containers of ice cream but they sold me enough to get by for the time being.

I was very glad to complete the distance to Vermillion and it was good for Marriane from Holland to get that tailwind today. Mine will come soon. But tomorrow, I am about 20 miles from Iowa and will head there in the morning before turning north. Minnesota and Wisconsin also await. But for now, we’ll just stay on track by heading north!

Have a great Sunday! I will see you back here tomorrow!

Zippin’ around: Family builds zip line in their backyard

By Susan Shinn Turner For the Salisbury Post Chris and Lynn Frank racked their brains to come up with a... read more