Double feature: The Cauble sisters lead with their hearts 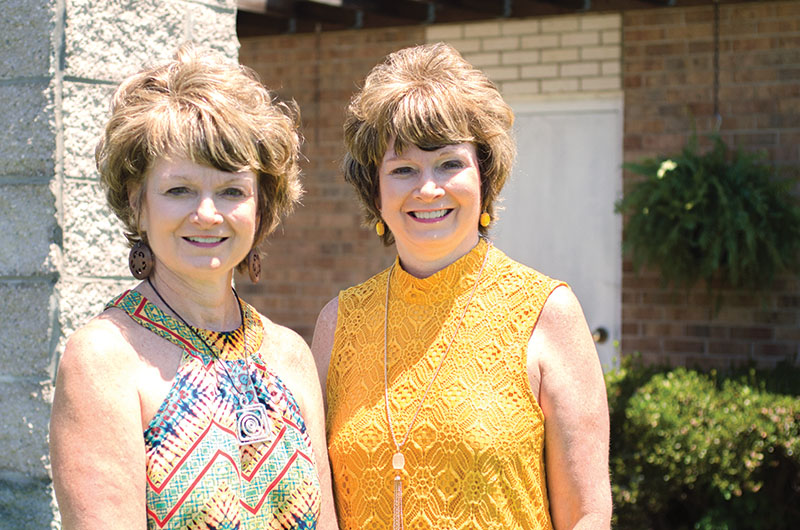 KRISTI CRAVEN/ SALISBURY POST Twins Brenda, left, and Linda Cauble at the First Church of the Nazarene in Salisbury on June 28, 2017 have lived together their whole lives and do almost everything together.

SALISBURY — The Cauble twins — Brenda and Linda — claim they are fraternal twins, but they sure seem identical. Could sisters be any closer?

They go the hairdresser together, They schedule their dental appointments for the same time. They live together and vacation together. For almost 38 years, they have been nurses together at Novant Health Rowan.

When they attended East Rowan High School, Linda and Brenda Cauble went well into their senior year as first and second in their class, respectively. They roomed together, of course, while later attending the School of Nursing at Cabarrus Memorial Hospital.

At the Salisbury First Church of the Nazarene, where they’ve attended virtually their whole lives, the Cauble sisters are co-presidents of the missionary program. In that role, they are the “instigators,” Linda says, when the church serves an evening meal once a month at the homeless shelter.

Through the years, when they’ve bought cars, Brenda and Linda have always purchased the same models on the same day. They’ve owned Chrysler Concordes, Chevy Berettas and are still driving their 2001 Toyota Corollas.

When they mow the big lawn around their mother’s house, where they always have lived, Linda pushes and Brenda rides. The sisters often walk together at Granite Lake Park and have long enjoyed the family’s in-ground pool.

Around the hospital, the Caubles are known as the nurses who still wear the throwback white dresses, white caps, white hose and white shoes.

The 57-year-old sisters are 5-foot-4 bundles of energy. And the confusing thing for their co-workers and friends is they still look much alike.

As a fellow member of the First Church of the Nazarene, Margaret Shumate has known the sisters — she calls them “the girls” — since they were children.

The Caubles have reduced their hospital hours to two 12-hour shifts a week, from 7 p.m. to 7 a.m., so they have plenty of time for their church and community pursuits, which include volunteering for the Capstone Recovery Center for Women.

“Instead of a therapist,” Brenda says. “I have Linda.”

“Their love for people — it just amazes me, and it’s genuine. it’s not an act,” Linda Mercado says. “It’s truly who they are.”

Linda Cauble claims Brenda is more of a talker and more of a risk taker than she is.

Brenda always goes first at he dentist’s office, for example. Because “B” comes before “L,” Linda adds as further explanation.

But there are limits to either of the sisters’ risk-taking. Neither of them has ever married, but Brenda has been engaged for many years — let’s just say more than 10 — to Robbie Cochran.

It’s the reason Brenda’s Corolla has a good 20,000 more miles on it than Linda’s.

The Caubles say they hardly ever argue: “When we do,” Linda says, “it’s short, over, and then we make up.”

Linda says the advantages to having a twin sister are many. Above all, “you always have a best friend,” someone who knows all your secrets, flaws and emotions.

On a recent church retreat, the sisters sat at different tables for meals and were not roommates. The retreat was encouraging the participants to broaden their friendships and get out of their comfort zones.

After that first lunch of not eating together, Brenda says, “I felt like I hadn’t seen her in a week.”

Brenda and Linda live with their mother, Evelyn, who is a young 82. “She takes care of us, and we take care of her,” Brenda says.

Their father died of cancer in 2012. His nurse daughters served as his primary caregivers toward the end.

Linda and Brenda say their dad had an endearing habit of always standing inside the screen door and waving goodbye to them as they left for work. He was a diesel mechanic, and Evelyn was a homemaker.

Steve Cauble, the women’s younger brother, lives and works in the Kernersville area.

Shumate says Brenda and Linda seem to support each other in everything and share a devotion to family, church and work.

“They are always willing to help and go over and beyond,” Shumate says. “… They’re compassionate.”

Linda Cauble knew from an early age she wanted to be a nurse; Brenda, not at first. Linda used to nurse her dolls, taking their temperatures and giving them baths.

Brenda decided she wanted to be a nurse at age 11 when she had to stay in the hospital to have her appendix removed. She appreciated how nice the nurses were in caring for her.

Not to be outdone, Linda had to have her own appendix removed a year later.

The sisters see nursing as their calling.

“I think it’s a calling from God,” Brenda adds. “… Nursing is the power to make a difference in people’s lives.”

Linda is a critical care nurse on the fourth floor of the hospital. Brenda works on the third floor with oncology, dialysis and medical/surgical patients.

The sisters are not adverse to holding hands with patients and giving pats on the shoulder.

In today’s digital age, especially in hospitals where all of a patient’s key information has to be entered constantly in a computer, “you still have to remember to give care from the heart,” Linda says.

That’s one of the reasons they continue to wear the white caps and uniforms. Most of their older patients associate those uniforms with care, plus the Caubles consider it a uniform of respect, to their profession and the patients.

Brenda and Linda remember the days when they worked a typical hospital floor with 30 patients — four people to a room, one men’s bathroom and one women’s bathroom for the whole hall.

Times definitely have changed, Brenda and Linda have maintained their nursing licenses through continuing education and what seems like a college degree’s worth of instruction on computers.

The Caubles’ talents as nurses have not gone unnoticed by their peers or Novant Health Rowan.

Both have received the hospital’s Customer First Award.

Linda says the sisters learned a lot of their work ethic, values and compassion from their parents and the church.

Fitting with their roles as the missionary program leaders, Brenda and Linda believe the church has to be involved in outreach activities.

“That’s our motto — ‘The Church Has Left the Building,'” Brenda says.

At the monthly meals at the homeless shelter, the volunteers helping the Caubles come from Capstone, the church and the hospital. The sisters always come up with some kind of theme, and CiCi’s donates hundreds of dollars worth of food.

“We have so much fun — the people are so nice,” Brenda says.

At Capstone Recovery, which is a women’s group home and human service center, Linda serves as a board secretary, and she also teaches a Bible study class every other Thursday.

A couple of years ago, the sisters noticed a pitifully hungry stray kitten hanging around the church. They called her “Angel,” and for an entire year, they traveled to the church twice a day to feed her.

In caring for the cat, the sisters became friends with a next-door neighbor to the church, who is now a regular on Wednesday nights. Angel turned out to be a boy, so he became Angelo, and he is now a permanent pet of their new church friend.

“They both have such big hearts,” Linda Mercado says.