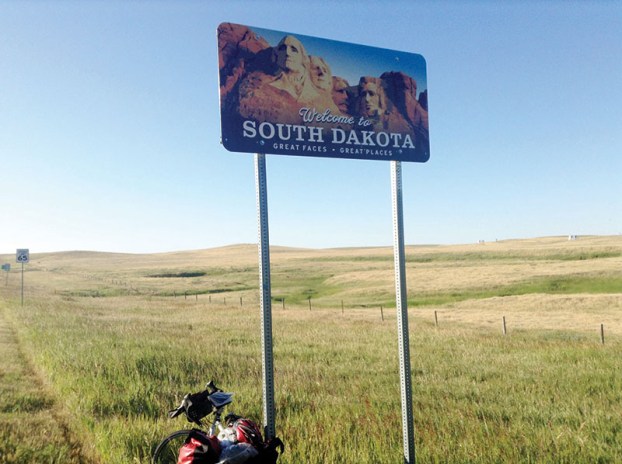 South Dakota is now state number 41 on a bicycle. Photo by David Freeze, for the Salisbury Post.

David Freeze: Buttes, wind and a little luck gets it done

There was no choice today. I had to make it to Newell or else. There were no motels and no campgrounds in between. In fact, I have seen few people, towns and not a lot of anything but cows and tourist traffic. I had a very relaxing night in Bowman at the Budget Host 4U motel in the biggest motel room I have had on this trip. Perfect for keeping the bike in the room.

I was out the door before 5 a.m. and noticed within seconds that the wind was a headwind. I said, “No Lord, not that!” But it was and I knew this would be even a harder day! I jumped right back on Highway 85, the one that I liked so much yesterday in North Dakota. Still it was the same today to start, plenty of smooth pavement and wide shoulders. Right off, I knew it was 16 miles to  South Dakota and my 41st state. The wind was very light early so I just rolled on down and got my picture of another state sign. Not much in the way of buttes to that point either. As soon as I crossed into South Dakota, the road quality was much poorer and there were no reliable shoulders. Much of what had been there was disintegrating. The first butte had a three-mile climb and I reached the highest point that had Doppler radar and three cell towers. I thought right away that the worst is probably over. Just the same as yesterday, they came on and on. By the way, with so few people, why do they need so many cell towers?

I rolled through Ludlow, a town although it had only a bar and a church. Then I hit Buffalo just before noon and tried to purchase half of the store’s inventory. I knew it would be over 60 miles before I could get anything else. The guy behind the counter was nice and let me use the store’s WiFi to send in some photos. I got plenty of water and hit the road again.

Now the push was on to get to Newell. Remember the group of farmers eating lunch in Bowman yesterday? They nailed the terrain and ended up being right about the wind. After a mostly headwind in the morning, the wind came around as a back shoulder tailwind in the afternoon. The terrain eased up some too. With the wind now cooperating, I began to make good time and found a 20-mile segment of pavement that had been recently done just after Buffalo.

The new pavement didn’t last and another segment of 20 miles was about as bad as any I have ever seen, including the worst states of South Carolina and Kentucky. I couldn’t ride on the shoulder because it was so broken up and I didn’t want to ride in the road because it was so bumpy.

Finally, I had been warned about taking a crossover road to get to Newell. Both the farmers and the guy in the Buffalo convenience store today told me it was really hilly. It turned out to be the most beautiful road of the day and the climbs were rewarding with more scenery instead just another butte.

After a very long day of 109 miles, I am in the Newell Hotel. My cheap streak took over and I have a $29 room in an old hotel where I will share the shower. Doing this hostel-type accommodation occasionally has brought good memories from past cycling adventures and I save money to spend later.

Tomorrow will start with a bike tour of Sturgis, in fact I think there might even be a bicycle rally there tomorrow morning. Especially if another cyclist shows up. Then, I will head on to Rapid City and try to catch the bike shop open. I have not had any luck figuring out what is wrong with shifting from the lower gears to the middle ring. The chain gets bound up and won’t swap over.

I have an Air B&B room for tomorrow and Monday, and plan to take the Mt. Rushmore tour with as many other things included as I can get on Monday. This might be the highlight of my whole trip.

Another shout out to the Men on Missions at First Baptist Church in China Grove for supporting my ride. They do great things and always are looking for new members. They will make the work fun and interesting too!

Because of the long ride, I am pushing my deadline again. I had better get it in and will look forward to another interesting day tomorrow. See you then!