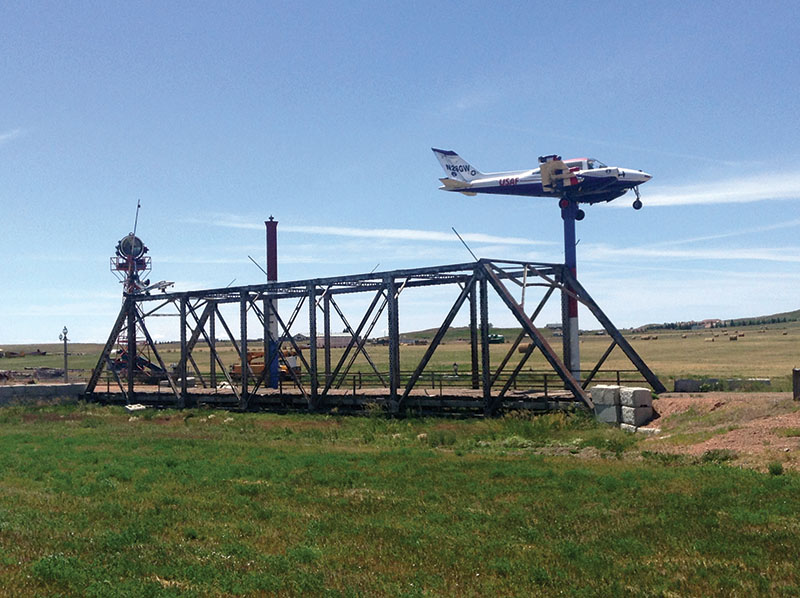 This is one of the first things Freeze saw in Bowman, ND. The plane is mounted like a windmill and tracks the direction of the wind. Photo by David Freeze, for the Salisbury Post.

The road out of Belfield, N.D., had a long uphill climb over a butte, the first of countless ones for the day. I saw it just before a great evening in another fantastic place called the Cowboy Inn. The rooms are all decorated with western things and had everything I need and more and the best shower yet. The hosts were great.

I planned to hit the road with a tailwind again and I did with a temperature of 41 degrees. The Dakota weather calls for a heat wave in a couple of days but I was surprised at how cool it was to start.

There is not a lot to tell about today’s ride. Most of the scenery was grassland and in fact, the area is part of the National Grassland. Not much traffic again, partly because there are few houses and few towns. In fact, today had only one town. Amidol bills itself as the smallest county seat in America with its population of 21. I was riding due south, except for a stretch of about nine miles where I turned into the wind and passed by the highest point in North Dakota. You guessed it, the White Butte at 3,506 feet.

Shortly after, I turned back to the south and reclaimed the tailwind. I stopped to take my jacket off and Randy Glettler of Regina, Saskatchewan, pulled over to make sure I was OK. Randy has been a cyclist, cross country skier, runner and endurance canoeist. I told him that none of that sounded like a motorcycle rider to me and Randy replied, “I am not your regular motorcycle driver but do enjoy it.” He plans to see the sights of the area and head back up into Montana going through some of the towns I just left.

Then it was back on the road and pushing up and down again. I came to Bowman, N.D., where I will spend the night. I was torn as to whether to press on and try to reach the next town nearly 50 miles away or get some rest and go for another long ride tomorrow. I had already pushed my deadline a couple of days recently and expect that there is a good possibility for tomorrow. So tonight, my story will be in early after just 60 miles.

I am hoping for about 107 miles tomorrow on the way to Newell, S.D. Some local guys, including the motel operator, gave me their opinions on what is ahead. One real town and not much else until I get to Newell. One of the local guys confirmed that the wind should be favorable again. I sure hope so!

Things are looking better for arriving in Rapid City on Sunday afternoon, then a big sightseeing tour on Monday and finally back on the road to Nebraska on Tuesday. I contacted the Chamber of Commerce and Bill Goodgion has worked to get things together. Bill is the finance director for the Rapid City Chamber of Commerce Convention and Visitors Bureau.

My part is to make this long ride happen tomorrow and to make in time to meet my deadline. On top of this, the bike is not shifting correctly. I will email Eric at Skinny Wheels about this tonight. I have a tentative room in Newell so I just need to get there. There might be a nap coming shortly in preparation after already getting sleepy on the ride today.

So, please check back tomorrow and see if I made it. Thanks for riding along every day! We are approaching halfway.