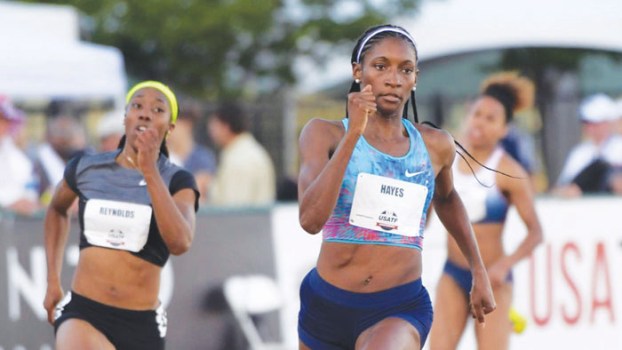 Hayes posted the fastest time in the event in the world so far this season at 49.72 seconds. That puts her in prime contention for a medal at the upcoming world championships, which begin Aug. 4, in London.

Hayes, a Hope Mills, N.C., native, ran track at Livingstone College under the coaching of Justin Davis and Tim Dunlap.

Hayes is one of the few national track champions who didn’t come from a Division I background. Instead, she clawed her way up the pro ranks from her days as Division II national champion at Livingstone.

“I’m so proud of what she accomplished at Livingstone and what she is doing as a professional,” Davis said. “With her coming from a small HBCU to being the best in the world, goes to show that it’s not the school you come from, it’s what you do when you get there.”

Though focused on making the world outdoor team, Hayes is no stranger to world championships. At the 2016 world indoor championships in Portland, Ore., she picked up a bronze medal in the 400 and a gold in the 4×400-meter relay. She came up short in making the 2016 U.S. Olympic team.

“It’s been an honor to watch Quanera grow as an athlete,” added Davis. “From the very first race I put her in, I knew that she was amazing. When she sat in my office her freshman year, she told me that she wanted to go to the Olympics. Although she has not made an Olympic team yet, with her faith and determination, she will get there.”

For now, she’s back to training and preparing for London, where she will have to face Shaunae Miller-Uibo and Allyson Felix.

Larson and Johnston return to Daytona after near miss in 500