David Freeze: The wind behind my back changed everything 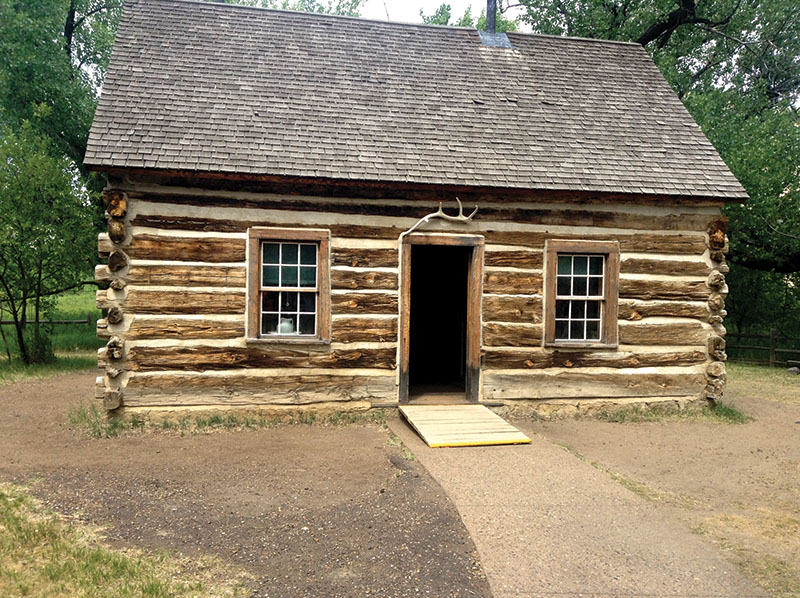 This is Teddy Roosevelt's cabin inside the Teddy Roosevelt National Park. It has been restored but still has some original items. Photo by David Freeze, for the Salisbury Post.

Although it feels like very long ago, I got up from my wonderful but only briefly used room at the Yellowstone River Inn in Glendive and started a new day. I wanted just a regular day, one without headwinds and crazy weather. I knew I was saying goodbye to the fun and challenges of Montana but was looking forward to another new cycling state in North Dakota. In fact, I had never been to North Dakota at all until today.

I found myself less motivated this morning and just couldn’t seem to get going quite right. The motel room was right beside Interstate 94 and the last day of Adventure Cycling maps called for me to use it most of the day. There were not many roads going east and the wide shoulder of the interstate is quite good. There never was much traffic today so things went well except for a morning of climbing over more of those buttes and some construction off and on.

The first town was Wibaux, about 600 people and with a fairly lovely downtown. I got off the interstate just to ride through it. By the way, during some of the morning construction, I heard a truck horn coming for a quarter mile. He was behind me and blowing the horn the whole way. He cleared me by inches because his load was a supersize combine. I guess he would have stopped if he really thought he might hit me.

Next came the North Dakota state line, done right by a very big sign. Then I bypassed Beach, N.D., because I didn’t have a reason to stop, plus my motivation still was not quite like usual. I knew there was a lot to do and I needed to find a reasonable motel in a touristy area and make better time than yesterday.

The next town up was Medora, famous for the Teddy Roosevelt National Park and a culture that is really tied to the old west. At this point, I thought that there is just too much to do and make it to Belfield where I had lined up a room. But things started to fall into place. I stopped at the park first and used my incredible senior pass for free entry forever. I watched a movie about the park and how it got started and listened to a ranger in training tell about Teddy’s cabin which is on site.  The park ranger at the entrance had told me that the park tour was 26 miles. I didn’t do it because by now I have seen virtually all the animals in the parks and way too many buttes. Before leaving, I enjoyed talking to Harry and Linda Johnson from the Seattle area of Washington. They had great questions about the bike and my trip.

An unbelievable fact about Teddy Roosevelt is that he came to the Badlands area because he was in a state of grief. His wife and mother had both died on the same day in his house. Roosevelt came to hunt bison but became so enamored with the great outdoors that he played a huge part in starting the national parks system.

I took time to stop at Dakota Cyclery, the first bike shop open in about 10 days. Got an extra tube, some CO2 canisters and chain wipe packets. Then, I confirmed my room and had 17 more miles to go.

It was back on the interstate with more buttes (enough already) and more construction. I had plenty of new pavement, some of it the really smooth kind. A brief rain shower and great views of the Painted Canyon, just more colorful buttes, ended the last part of the today’s ride at 81 miles.

I actually had a tailwind today and saw one cyclist hurting like I was yesterday as he had his head down and hammering into the wind. My motel for the night is in the very nice Cowboy Inn in the small community of Belfield. I had three very friendly conversations within the first half hour of being in town.

One scenario is worth mentioning from today. North Dakota is the first state of this trip that has regular rest areas as you enter the state. I had a ton of questions so I stopped. I wanted to know about a reasonably priced motel within my mileage range. Everything around the national parks always seems high. The lady on duty directed to me to one at $199 a night. Not going to happen. Then I asked about the best way to leave the area and head down to South Dakota in the Rapid City area. She told me to go back eight miles west and take some road. Not going to happen, either. And last, I told her I wanted to see Teddy’s park and the Painted Canyon. She said the canyon was not part of the park, but turns out it was. One interesting thing is the couple that she talked to ahead of me was heading down to Mt. Rushmore and they were from Statesville, about 20 miles from home.

Tomorrow, I start to wing it. No preplanned maps and just a sense of what I need to do to make Mt. Rushmore, etc. all happen. So come ride with me again tomorrow. It’s going to be fun!