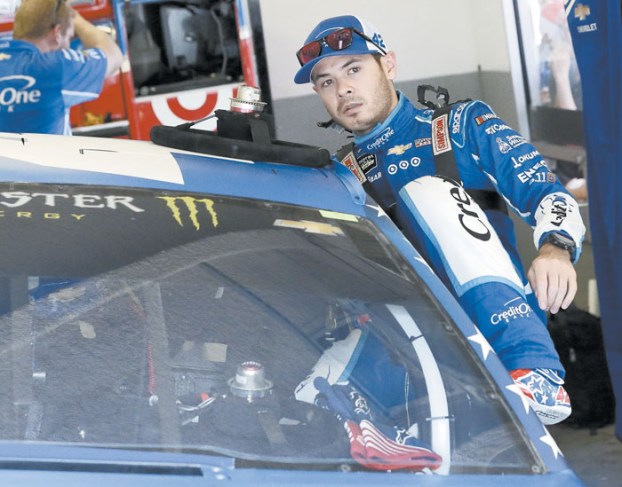 Larson and Johnston return to Daytona after near miss in 500

Daytona coming up this weekend A race fan takes a selfie photo with Dale Earnhardt Jr., center, as others try to get autographs as he walks through the Fan Zone section after a NASCAR cup auto racing practice at Daytona International Speedway, Thursday, June 29, 2017, in Daytona Beach, Fla. (AP Photo/John Raoux)

DAYTONA BEACH, Fla. (AP) — Kyle Larson found himself leading the Daytona 500 with one lap remaining and a shot to win the biggest race on the NASCAR calendar.

Then he ran out of gas and finished 12th.

“At the moment, I wasn’t that upset because I never thought I’d have a shot to win the 500,” Larson told The Associated Press. “I was just really excited that I had a shot to win. It was the days after that I was really bummed out, realizing that I could have won the 500.”

Well, his crew chief was bummed out even before the fuel tank ran dry on the Chip Ganassi Racing Chevrolet.

It was an agonizing final five laps for Chad Johnston, who knew the No. 42 was close to running out of gas but wasn’t sure if the car could make it to the checkered flag. As car after car ran out of gas and Larson moved to the front, the team was 2 ½ miles from victory.

“Half a gallon of gas,” Johnston told AP on Thursday. He said those final five laps were “sickening.”

“We gave it away,” Johnston said of the race won by Kurt Busch. “We knew we were close. We didn’t know we were going to run out.”

Larson and Johnston are back at Daytona in the first garage stall, their right as NASCAR’s points leader.

With two wins this season, the team has been second to only Martin Truex Jr. as the class of the Cup Series this year. They’ve got a solid spot in the playoffs, and a hot summer of racing ahead of them, but Johnston said the plan is still to win every weekend.

There’s no rest for this Ganassi team, not after how long it has taken to get into this position. For Larson, the promised future star of NASCAR, it has taken almost four years for him to finally scratch the surface of his potential.

But for Johnston, it’s been a roller-coaster ride. He went through the biggest cheating scandal in NASCAR and a stint with Tony Stewart during the lowest point of Stewart’s career before his pairing with Larson.

Johnston was Truex’s crew chief in 2013 when the team raced its way into the playoffs, only to be stripped of the spot when it became clear they were the benefactor of Michael Waltrip Racing’s organizational manipulation of the finish. Truex’s teammates had aided his path into the playoffs, even though that team had no part in the shenanigans, and NASCAR kicked them out of the playoffs.

Less than three months later, that entire team was out of work and MWR eventually went bust.

Johnston landed at Stewart-Haas Racing, crew chiefing for his boyhood idol Stewart, but the duo never found success together as Stewart was in the twilight of his career.

It bothers Johnston immensely that he didn’t have success with Stewart.

“With Tony, I didn’t run as well as I wanted. He’s a hero of mine, still a hero of mine. So it was pretty unfortunate for me that I couldn’t do any better than I did over there,” Johnston said. “It was heartbreaking. But then to come over here … it makes it a little bit more rewarding.”

Johnston and Stewart split before Stewart’s final season, and Johnston made the move to Ganassi. He guided Larson last year to his first Cup victory and a spot in the playoffs. It was the first time in Ganassi history the owner placed both of his Cup cars in the playoffs.

Johnston also gets to work with a raw driver in Larson, who has the same sprint car background as Stewart among other similarities.

“He’s the closest thing that has come along to Tony. No matter what he gets in, he’s fast,” Johnston said. “He doesn’t concern himself with what springs are on the car. He just drives it for all it is worth and tells you what it needs to go faster. Tony was the same way. It’s fun to watch Kyle. He’s fast. You could strap him to a lawnmower and he’d be fast.”

For Larson, he has found a crew chief who can pull feedback from him and has learned how to push him.

“When I first met him, he was very, very quiet and a little awkward,” Larson said. “But he’s far from awkward. He’s stern and not afraid to get on people and get push them to be better. He’s good. He’s a very good leader.”

By Will Graves AP Sports Writer PITTSBURGH (AP) — John Tumpane can’t explain why he approached the woman as she... read more