David Freeze: Possibly the most challenging day yet 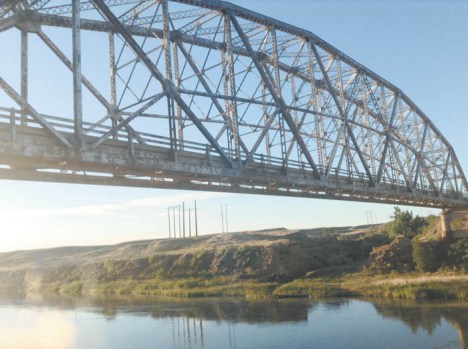 The Missouri River and this fantastic old bridge were the first things I saw on the way out of Wolf Point. David Freeze/For the Salisbury Post 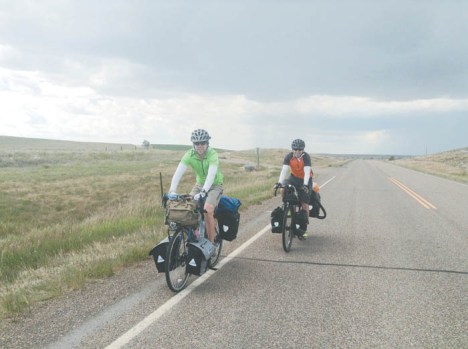 I met Spencer Birchfield (orange shirt) and Nick Cattin in Glasgow and saw them again as we were riding today. They are from Waldo, Ohio. David Freeze/for the Salisbury Post 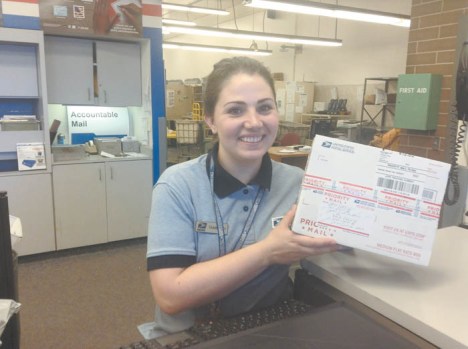 I stopped in the Wolf Point Post Office yesterday. Tammy Tonneson boxed up my stuff and sent it home for me. She had seen me riding earlier. David Freeze/For the Salisbury Post

After taking most of an afternoon off Wednesday, I had big plans for Thursday. I wanted to go long and had a feeling it was going to be challenging, but little did I know how much.

I wanted to ride to Circle, a distance of about 53 miles over some challenging terrain.

Cyclists call them rollers, and these were world-class. Up and down with gut-busting regularity, and it frankly felt like we were going up way more than down.

There was little traffic and no other towns, and not a whole lot to see once you are very acquainted with hay and grain farms.

The big variable for the day was the wind. I looked out and saw the flag at the motel blowing from the south gently, which I took to be a good sign.

After about 10 miles or about the time I crossed the Missouri River, the wind started to come around in my face. I thought that there couldn’t possibly be a headwind again. Turned out that the headwind joined with the rollers to make a very long morning.

I saw Spencer Birchfield and Nick Cattin from Waldo, Ohio, as we were finishing up the ride into Circle. We stopped and talked a little and then hit the road going east on State Road 200.

The ride to Circle was all on State Road 13, a road that I don’t expect to see again.

As we turned onto 200, the fun really started. We still faced a headwind, and we had a big hill to climb, working up to just over 3,000 feet in elevation.

The wind got stronger and we couldn’t make any time, leaving me to worry if I could make the deadline for this story. Storms were building behind us and all of a sudden, it got chilly and then the wind became a strong tailwind.

This segment to Glendive was about 50 miles long, and I felt I had a chance to get finished in time.

With about 35 miles to go, the wind was suddenly pushing me up the big mountain and rain started to fall. I didn’t think much of it and just buttoned up my bags and put my rain jacket on.

At first, the ride was easy but in the Montana sky, you can see forever. Storms were popping up all around, and I still didn’t worry.

After crossing the pass, the road leveled out and with the wind pushing, I thought that this was a lot of fun. That didn’t last for long.

Heavy rain started to fall with some hail in it, and fierce wind started to gust from the left side. On one occasion, I was lucky to keep my balance. Much of my riding for that period was done with a lean to the left to offset the wind.

The sky was totally covered with storm clouds. Lightning, especially for afternoon lightning, was spectacular and popping all over the horizon.

I stopped once in Lindsay, the only other town between Circle and Glendive, to use the bathroom. More than anything, it was to gather myself after battling the conditions and especially the trucks, which often got too close during such a storm.

This was tough riding.

The cruelest thing of all was that the wind turned around again with a ferocity that topped anything else for the day. Twice I couldn’t pedal forward. My confidence to make the deadline was fading quickly, and a few prayers were uttered.

With about 8 miles to go, the wind lessened and I struggled on into town with a total of 104 miles. I had not eaten since early afternoon and was out of gas — frankly about as exhausted as I ever get.

I got a good room at a great price at Yellowstone River Inn and was very hungry. There would be some major eating Wednesday night.

I want to mention that I stopped at the Wolf Point post office Tuesday and Tammy Tonneson did an excellent job packing my stuff to ship home. I included my cold weather stuff, and then it was 46 degrees Wednesday morning. It was fun to talk with Tammy, who had already seen me cycling from Glasgow that morning.

Today will include a ride to Medora, North Dakota. Looks like part of it will be on the interstate.

Wednesday was an extremely tough day and hopefully no more days will be like it. I am headed for food and then the shower.