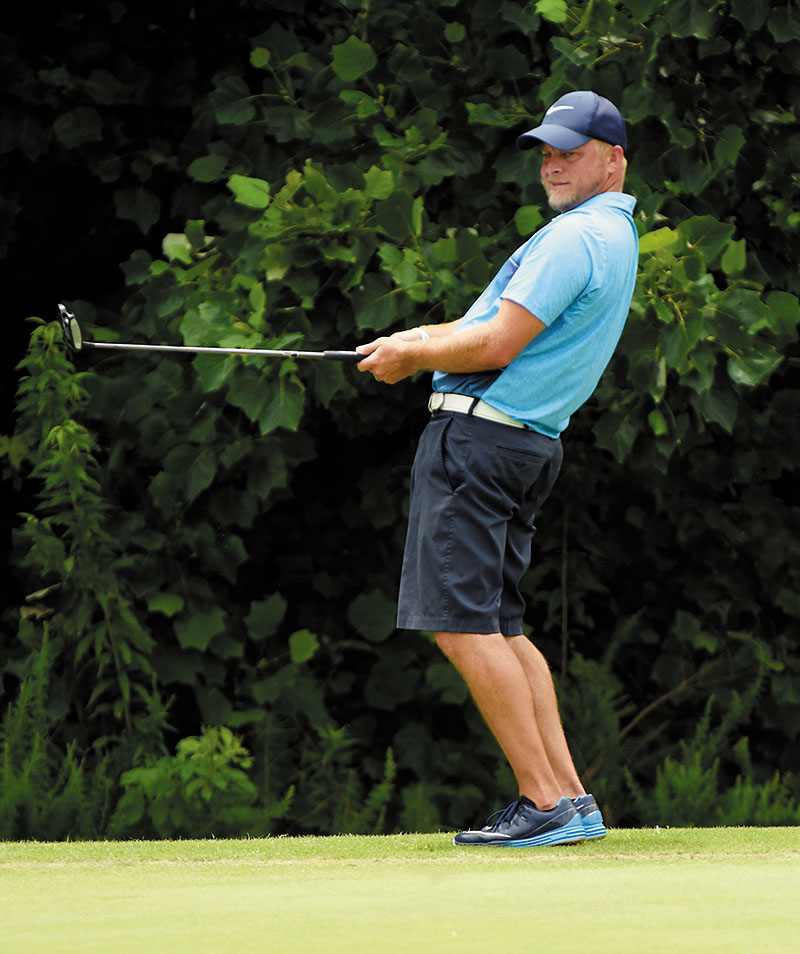 Wayne Hinshaw / for the Salisbury Post Keith Dorsett adds some body English to his putt in the Rowan Masters Golf Championship at the Warriors Club. Dorsett went on to win the event.

CHINA GROVE — It was a very productive weekend for the “old” guys in the 15th annual Rowan Masters Golf tournament at the Warrior Golf Club.

At age 38, Keith Dorsett made the kind of statement only a veteran golfer can make as he rolled past Sean Kramer, 32, 4 and 3 Sunday afternoon for the championship. It was Dorsett’s eighth win in the 15-year history of the event but his first in five years.

“It kind of irked me that it has been five years but a lot has happened in that time,” he said. Primarily, he got married and is now the proud father of 10-month-old daughter Addison Brooks. That life-changing event has had a significant impact on the way he approaches the game of golf.

“I don’t get quite as aggressive or angry on the golf course anymore,” he said. “That is not my job. I just try to have fun out there and if I win, I win … It is hard to practice as much when you have a family you would rather be with more.”

Don’t misunderstand. Marriage and fatherhood may have mellowed Dorsett a bit but he is still highly skilled and very competitive on the golf course. The grandson of local golfing royalty A.D. Dorsett (daughter Addison’s namesake), Dorsett has multiple wins in the Labor Day Four-Ball and the Billings Rowan Amateur. His dominating eight wins in the Rowan Masters put Dorsett’s name high on the list of the best amateur local golfers in county history by his own right.

Kramer found out how competitive Dorsett still is in the championship match. A birdie put Kramer ahead after the first hole but Dorsett caught him on the fourth and by the eighth he had built a 3-up lead. Kramer then hit a 25-foot birdie on nine to cut the margin to 2-up but a short putt missed birdie opportunity on 10 cost him a chance to get back within one.

“I made a couple of mistakes but overall I couldn’t ask to hit the ball much better than I did today,” said Kramer, a South Rowan alum who operates a landscaping business in China Grove. It was the first finals appearance in the event for Kramer who has played in all 15 of the Masters tournaments. “If I had to lose, I couldn’t ask to lose to a better guy. Keith is a real steady player and I enjoy playing with him. We have a lot of fun out there.”

Dorsett’s competitive nature kicked into high gear on the back nine when he drained a 10-footer on 12 for par and a 3-up lead. Then on the long par 5 13th hole, Dorsett just missed an eagle putt from the front edge but got the birdie to drop for a 4-up lead with 5 to play. He went dormie with a par on the 14th then closed it out 4 and 3 with a par putt on the 15th.

“It was kind of a struggle for me in the first four rounds of this tournament because I didn’t really have my A-game,” Dorsett stated. “Then Sean went one up on me on the first hole and I was like okay, here we go. But after that I got square then went 2-up on him. I knew right then to put the pedal down and don’t let up.”

Ironically, the championship match was the largest margin of victory for Dorsett in the tournament. His steady play produced two birdies and 13 pars in the title match. Earlier in the three-day match play event, Dorsett won 3 and 2, twice by 2 and 1, then held off Andrew Morgan 1-up in Sunday morning’s tight semi-final match. Dorsett gave up all of a three-hole lead against Morgan in a match that was all square after 16.

At the same time, Kramer pulled a big upset in his semi-final match Sunday morning by outlasting defending champion Andrew Purcell 2 and 1. “That was big for me because anytime you beat the defending champion,” Kramer said, “That gives you a real momentum boost.”

The Masters tournament started last Friday with 32 golfers in match play competition over three days at the Warrior. By the time the semi-finals rolled around, however, only two of the top 10 seeds were still standing. Qualifying medalist Michael Swaringen (66) was ousted Saturday by recent South Rowan grad Parker Chavis who was runner-up in last spring’s State 3A golf tourney.  Meanwhile third seed Michael Childress, 17, a University of Richmond commit and last year’s Masters’ runner-up was surprised by William Little the same day, 4 and 3.  Many of the “young guns” who had dominated in recent years in local amateur events were dispatched by the “old guys” by the time the Masters was all over. The last to fall in the semi-finals was Purcell, 22, who just graduated from USC-Upstate last month.

A lot of the same competitors will be back at it again in late July for the annual Horace Billings Rowan Amateur at Corbin Hills. Dorsett plans to be right there with them.

“I will still play in all of the events and if I don’t win it is not that big of a deal,” Dorsett said. “But don’t get me wrong. I will be trying to win and I won’t just go out there and hand it to somebody.”