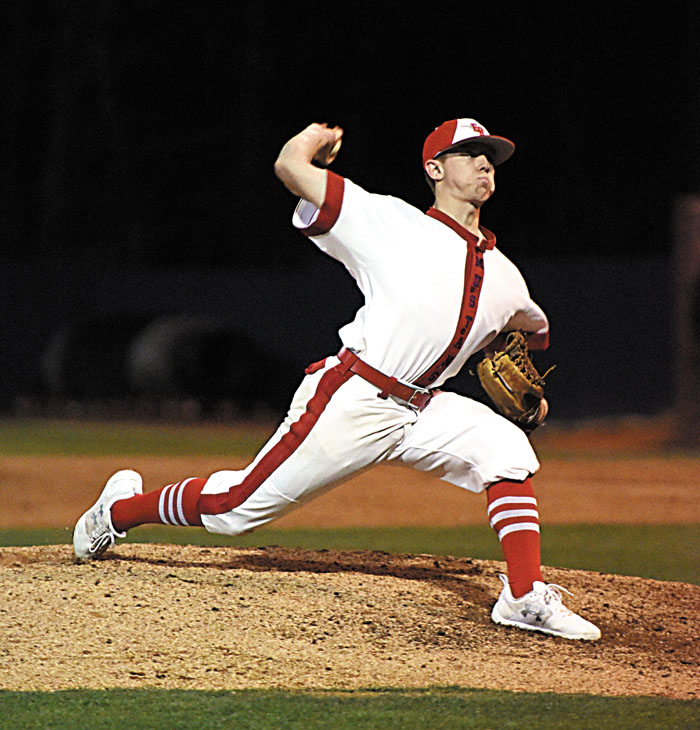 Wayne Hinshaw file photos/for the Salisbury Post ... East Rowan’s John Owen, above, and Carson’s Owen White, below, are the Post’s Rowan County Pitchers of the Year for the high school baseball season.

SALISBURY — This is the seventh year for the Patrick Snider Memorial Award that is given annually to the Rowan County Pitcher of the Year.

The purpose of the award is to keep alive the memory of Snider, a North Rowan and Rowan County American Legion pitcher who died from cancer in 2010 when he was 17. When he was 14, Snider helped his AAU team win a national championship.

This is the first time two statues had to be ordered. The award will be shared by Carson junior Owen White and East Rowan senior John Owen.

While we’re dealing with a pair of talented Owens, there’s little chance of people confusing the hurlers. White is 6-foot-4, while Owen is 5-foot-10.

No one was more stunned when co-winners were announced than the smaller Owen.

“Well, I did have a pretty good season,” the East right-hander said with a laugh. “But Owen White was unbelievable. I don’t think anyone could be better than he was.”

Owen, who won the Snider Award in 2016, was better in most ways in 2017 than in 2016. More strikeouts (83), fewer walks (9), lower ERA (0.65 in 54 innings) and lower opponent’s batting average (.152). The only thing Owen didn’t have this season was a pile of wins, but there were new pitch-count rules and extenuating circumstances. Owen (5-1) shut down opponents several times without winning. He threw eight scoreless innings against West Rowan and seven shutout frames against Central Cabarrus but got no decision.

“I still loved my team,” Owen said. “There were just nights when we faced tough pitching.”

Owen’s lone loss came on March 7 when he and his teammates faced the toughest pitcher of all — White.

Still, Owen was the defending champ in the pitcher of the year competition, so it was hard to take the award away from him when he improved.

While White, a junior committed to South Carolina and the 3A Player of the Year in the state, throws harder than Owen, they have similar pitching arsenals. Both complement their fastball and changeup with a nasty curveball.

White’s standard mix for a game is 70 percent fastballs, a few more than Owen throws, but White can adjust that ratio depending on the opponent.

“If you’re pitching against a team like East, you know they’re sitting on fastballs, so we’ll go with maybe 50 percent fastballs to them, with more first-pitch curveballs,” White said. “The toughest team for me this year was definitely South Rowan because that’s a team of guys looking to put the ball in play. I didn’t give up my first earned run this year until we faced South. They hit some balls hard.”

That first earned run off White didn’t come until March 25 when he was making his fifth pitching outing.

Owen, who is headed to Greenville’s Pitt Community College with the idea of proving he can pitch at the Division I level, also put up some dazzling stats. He faced 196 batters this season and allowed just one extra-base hit. That hit was an opposite-field double that Carson’s Maddux Holshouser reached out and punched down the left-field line.

Owen wears the No. 10 jersey, the number that was sported by Patrick Snider’s favorite player, Chipper Jones.

He is the second pitcher to win the Snider Award twice. Carson’s Dillon Atwell won back-to-back in 2012-13.

White will be back  at Carson in 2018, and he can take aim at a repeat trophy.

“I love the challenge,” White said. “And in this county, there’s always someone pushing you.”