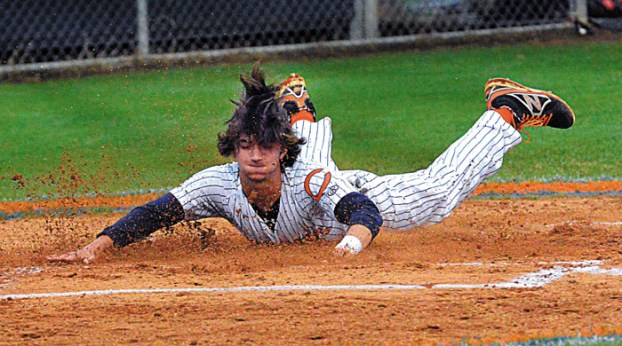 Wayne Hinshaw file photo/for the Salisbury Post ... Carson junior Owen White was selected as the Salisbury Post’s Rowan County baseball Player of the Year. He batted .473 and led the Cougars to the South Piedmont Conference Tournament title. Also a pitcher, White was 8-1 on the mound with an earned run average of 0.33. SALISBURY — OPS is a super stat, as it provides a true reading of how productive a hitter is.

OPS is calculated by adding on-base percentage to slugging percentage. That gives us a number that measures not only how frequently a player gets on base, but also whether he produces extra-base hits. Not many high school guys belt homers or triples, but doubles are really important. They often drive someone in. At the very least, a double puts a runner in scoring position.

A number in the .700s is considered a decent OPS, while .800s are excellent. The .800 guys are usually household names, people like East’s John Owen (.839) and West’s Brandon Walton (.858). There’s a reason Owen and Walton bat fourth and fifth in the lineup for the Rowan County American Legion team.

An OPS above .900 is great. That’s serious raking.

East shortstop Chandler Blackwelder put up an tremendous OPS of 1.175, and he added 20 steals that weren’t measured by OPS. North outfielder Henderson Lentz batted  a county-best.475, and while his OPS wasn’t available, it certainly had to be north of 1.000.

Still, it’s hard to make an argument that White wasn’t the county’s best hitter. And there’s no doubt that he was the best shortstop (three errors, 10 double plays).

So even if he never threw a pitch, White would have been a solid choice as the Post’s Rowan County Player of the Year.

But he did pitch. Actually, pitching is what he does best of all. He was 8-1 with an 0.33 ERA. He had four complete games, two shutouts and one no-hitter. In 64 innings, he struck out 94 and walked 14. He was undefeated in March, April and May. In 14 innings against South Piedmont Conference champ West Rowan, a team that made the fourth round of the 3A playoffs, he fanned 29 while allowing seven hits and no runs.

When you throw in his dazzling pitching numbers, White, who mixes low-90s fastballs with a wicked curve and changeup, was an easy POY choice. It was easy even in a county that includes Blackwelder, Owen, Lentz and West’s UNC-bound, two-way player Austin Love.

“On top of the stats, Owen was a great leader by example,” Carson coach Chris Cauble said. “Practice or games, he goes hard, doing all the little things right.”

White will receive the Mark Norris Memorial Award that has been provided since 1978 by the Norris family in Mark’s memory. A baseball player at Salisbury High, Mark was killed in an accident during his freshman year of college. White accepted the award, the 40th given by the Norris family, with grace.

“There are a lot of really good players in this county, and they pushed me to do my best,” White said. “But mostly I thank my coaches and teammates. I’m lucky to have them. Without them, none of this would be possible.”

White has committed to the University of South Carolina and was recently named the 3A Player of the Year for North Carolina by the state’s coaches. Assuming good health, he’ll probably enter the 2018 season as the state’s top high school prospect and one of the nation’s elite 25.

“(First baseman) Ben Shoaf’s father prayed for us before every game, and I ‘m sure that’s one of the reasons I’ve been so blessed this year,” White said. “I’m thankful every day for the ability I have, and I try to use it in the right way.”

Ideally, the All-Rowan County team is done by position, but that wasn’t possible this time. It was the year of the pitcher and the year of the two-way player, with the county’s top talent lumped on the mound and at shortstop. Eleven of the county’s best players pitched frequently. Recommendations by coaches and all-conference teams factored into the Post’s selections. The 17-team man first team has unusually even distribution from the six schools, with three each from West, East, Carson, South and Salisbury, and two from North.

Austin Chrismon, South Sr. 2B — All-SPC, 31 hits, including two doubles in a game off Owen White,  headed to UNC for football but might have been county’s most improved hitter

Walker Joyce, South Sr. P/OF — All-SPC, 8-1 season on the mound included a no-hitter with 16 strikeouts against Central Cabarrus, led offense with 3 hits in win vs. Robinson

Henderson Lentz, North Sr. OF/P — All-CCC, batted .475, ran down everything in the outfield and helped out on the mound

Garrett Alewine, Carson Soph. C — Cauble and White both pointed at the young catcher as a big reason Carson team ERA was 1.50

Pearce Wilhelm, West Sr. 1B/P/C — .847 OPS, most of his 18 RBIs came in the stretch run, plus good work out of the bullpen, signed with Catawba

Olen Stamper, West Jr. P/IF — 4-0 with 1.72 ERA on the mound, including a no-hitter in the playoffs, walk-off homer against Carson was one of the biggest swings of the year, .832 OPS

Dawson Larrimore, South Sr. OF — Offensive catalyst and ran balls down in center field, his 3 hits sparked a win over Carson

Corbin Smith, North Sr. 3B — Batted .377 and came through with clutch hits

Blaine Shellhorn, Salisbury Fr. OF — His exceptional speed led to 16 runs and 9 steals, he knocked in 12.