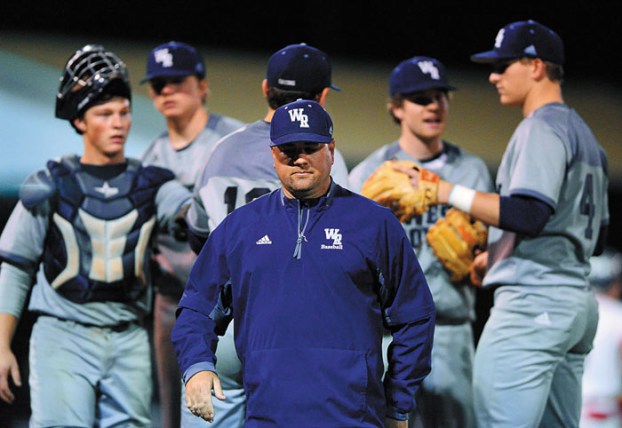 Wayne Hinshaw file photos/for the Salisbury Post ... West Rowan coach Seth Graham leaves the mound after a meeting with his team during a game this season at East Rowan. Wayne Hinshaw/for the Salisbury Post …
West Rowan’s Seth Graham was selected as the Salisbury Post’s Coach of the Year for the third time in three years. He led the Falcons to a SPC championship and a deep 3A state playoff run.

SALISBURY — The baseball coaching competition is stiff in Rowan County.

Then there’s Salisbury’s Mike Herndon, who has even more career wins than Cauble when you include his highly successful days at Davie County and Southwest Guilford.

Still, West’s Seth Graham, with a modest 63 career wins, is now 3-for-3 as far as Rowan County Baseball Coach of the Year awards.

No baseball coach in county history has won so many games in his first three seasons. All those wins also have meant three conference championships in a row for the Falcons for the first time ever.

While Graham has made 20-win seasons look routine, they aren’t.

Twenty-win seasons were  impossible or close to it for the majority of the county’s history because teams simply didn’t play enough games. Boyden’s 1955 state champs, for instance, went 12-2 for coach Joe Ferebee.

East’s 1968, 1970 and 1972 Western North Carolina High Schools Activities Association champs, all coached by Phil Harbinson, rarely lost, but they won totals of 17, 16 and 16 games. That helps put Harbinson’s 215 career wins in perspective. He was an amazing coach.

But the 20-win season is still scarce, still something to holler about. Salisbury hasn’t done it since 1984. North and South, both historically winning programs,  have done it only three times in their histories, while Carson has achieved the milestone four times.

Before Graham’s 2015-17 Falcons, the only other time a Rowan team won 20 or more three seasons in a row was at East. Jeff Safrit’s Mustangs did it from 1993-95, while Hightower’s Mustangs accomplished the feat five straight times from 2006-10.

But after graduating Harrison Baucom, Omar Bautista, Juan Garcia and Jeremy Simpson, the Falcons went out and won 20 again in 2016.

This season, after losing Bryan Ketchie, Kacey Otto and Lee Poteat, among others, West three-peated.

So how are the Falcons doing it?

“We’ve been fortunate enough to have a good group of seniors each year, and they’ve done a great job of leading,”  Graham said. “And we’ve been good on the mound all three years. That’s been the constant. Our hitting has been on and off, but the pitching has always been there.”

In mid-March, after four conference games, West stood 1-3 in the SPC.  There was a 3-2 loss to Robinson, a 3-2 loss to South Rowan and a 1-0 loss to Carson. It appeared to be time to panic, but obviously Graham didn’t and his team didn’t.

He stayed positive, reminded his team that they were one clutch hit away from winning all three of those lost games, and, in time, the hits started to fall for his offense.

West batted a modest .259 and hit only seven homers, but the Falcons pitched extremely well (1.59 ERA).

The hidden stat for West was the walks category. West hitters walked  or were hit by pitches 154 times. West pitchers walked or hit 102 batters. That plus-52 in the free pass column meant West was getting a lot more baserunners, and more baserunners meant more runs.  West outscored the opposition, 158-75. Austin Love was outstanding (6-2 0.79 ERA), as expected, and the other guys came through. Olen Stamper and Payne Stolsworth were both 4-0.

“”We had that bull’s-eye on our backs after winning back-to-back championships,” Graham said. “So we saw an awful lot of No. 1 pitchers in a league where most teams had a great No. 1.  When you face (Carson’s) Owen White twice and (East’s) John Owen twice, it’s not easy to have a great batting average. Fortunately, we had a little bit of luck on our side.”

The guy who got hot at the plate when West needed someone go get hot was senior Pearce Wilhelm. Wilhelm started slow, but he delivered often as West won 11 of its last 12 SPC games (the loss came in a nine-inning game with East) and went on to win three playoff games.

While Love, infielder Brandon Walton and catcher Trevor Atwood had big statistical seasons and made first team all-county, West’s second team guys — Stamper, Wilhelm and shortstop Brett Graham — were just as important in making it three titles in a row.  Graham batted .202, but he walked so often he led the SPC in runs scored, and he and Atwood anchored West’s defense.

“Wilhelm drove in so many key runs for us, and Stamper pitched in big games against tough opponents and threw a no-hitter in the playoffs,” Coach Graham said. “Graham was our most improved defensive player.”

West (21-7) went a long way toward winning the league by surviving a 13-inning game at home with Carson to manage a split with the Cougars, who won 20 games. Stamper’s walk-off homer provided the dramatic difference.

“To win our league is a real achievement because it’s always tough, and this year it was the best that it’s been in my three years,” Coach Graham said. “But it’s a league that prepares you for the playoffs, and that’s why we’ve had some success there.”

Graham, who assists Jim Gantt with the Rowan County American Legion team, is a South Iredell High graduate who played baseball at Wilkes Community College and Mars Hill University. He’s not a schoolteacher, but he’s been coaching college, Legion and high school teams since 2005.

Graham married his wife, Hillary, a West Rowan graduate, in 2010.

This season is one they’ll always remember, and not just because the Falcons made it three 20-win seasons in a row. Their first child, Allison Atwell Graham, was born a few weeks ago.

By Mike London mike.london@salisburypost.com SALISBURY — OPS is a super stat, as it provides a true reading of how productive a hitter is. OPS... read more