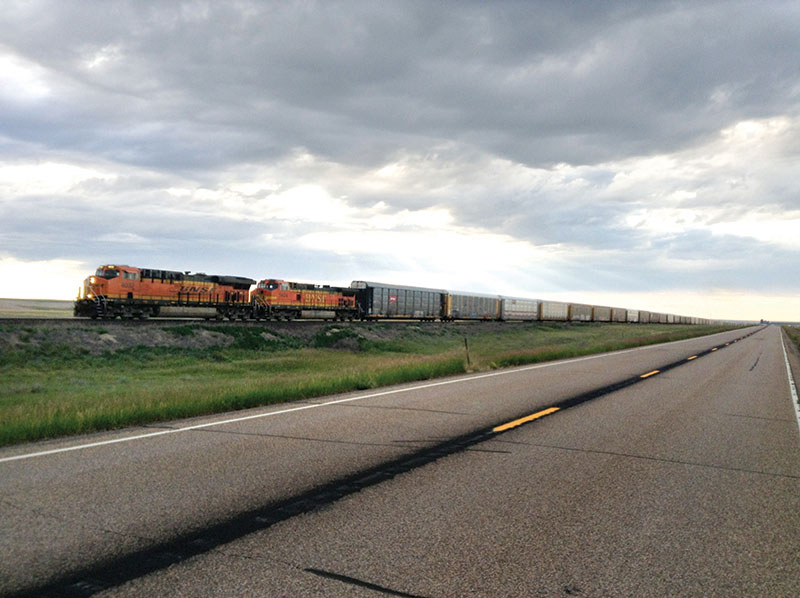 These trains were a big part of Freeze's day Saturday. He spent most of the day running parallel with the tracks. He is in Havre, Montana, another switching location for BNSF. Photo by David Freeze, for the Salisbury Post.

Last night, I came up with the big plan to ride over 100 miles today because there were only little towns from Shelby to Havre, Montana. I spoke to the very nice lady at the Siesta Motel in Havre and told her what I was planning. She promised to save me a room until they heard from me and assured me that the whole route was flat. So, as you can imagine, I hit the road early and promised to push it, meaning less conversations, historical markers, etc.

I got started out of Shelby with a mean climb right off the bat. Then things settled down a little bit as I pass through Dunkirk and Devon, then Galata and Lothair. Not much was happening in any of those places except that most of them had grain elevators. Grain elevators and trains were the theme for the day, and I saw plenty of each. Oddly, the grain elevators were all on my left or north side and so were the trains. I guess it isn’t odd at all since the trains service the elevators.

The first town of any size was Chester. That is where I got today’s deal on two egg, cheese and tomato muffins. Those two sandwiches and a bag of oatmeal cookies powered a long day.
I didn’t miss a single historical marker and one of the most interesting was just out of Chester. The Baker Massacre in 1870 was a cold-blooded killing of 173 Blackfeet Indians by the U.S. Army. The soldiers, under Colonel Baker, were actually looking for another band of Indians who had killed a ranch owner the year before.

A bad sign showed up next when it touted the Sweetgrass Hills, an area sacred to the Blackfeet and valued for the ability to provide good areas for hunting and for watching for enemies. Those hills were not especially big but they went on and on, one after another. When I finally topped the last one, the terrain started to settle down some and I made better time.

Then came the lookalike towns, all with grain elevators galore, in Joplin, Inverness, Rudyard, Hingham, Glidford and Kremlin (as the sign touted, “the USA version”). They all were small but obviously dependent on the agricultural grain industry. I think it was between Glidford and Kremlin that I battled unending hills and the unending rumble strips at the same time. Several times, I was forced to ride in the traffic lane because the rumble strips were all the way across the 2-3 foot shoulder. Traffic was light and very considerate all day as I made 105 miles, every bit of it on U.S. 2, formerly referred to as S.R. 2. The owner of Jacobson’s Cabins in East Glacier Park told me that Highway 2 runs all the way across the United States. Most of it is good except for the rumble strips. Sometimes I have a whole lane to myself.

Havre is another switching yard for the BNSF (Burlington Northern Santa Fe) trains, just as Shelby was. They call this the Hi-Line and the trains are running constantly. Early this morning, the train horns were very loud and I heard my first one at 5 a.m. My motel last night was the Totem Motel, one that I learned a good lesson from. Don’t judge the experience by the location. I had a great night’s sleep for one of the best prices yet. Very quiet, which is sometimes hard to get.

Tonight, I am in the Siesta Motel which is a really cool place owned by three sisters. It is next door to the busiest and most well stocked IGA grocery store I have ever seen. I have cookies to restock my bags for tomorrow. On my next trip back here, I will take time to visit Have again. Over 100 years ago, an underground city was built and included a brothel, places to beat prohibition and several other places. I got here too late to tour it all but would love too. There is a U.S. Army Fort Assinniboine nearby that served the area during the Indian conflicts and a buffalo jump is also here. The Indians would drive a certain amount of buffalo over the cliff and then use every part of the animal for their subsistence.

With that, I will close for the night and go explore the town while watching the train activity. I am heading for Malta tomorrow if all goes well, still on U.S. 2. It was a very good day! See you again tomorrow!