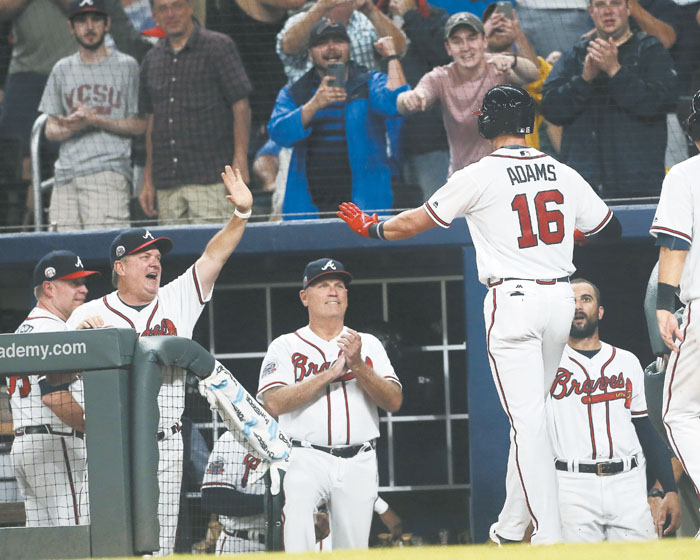 Atlanta Braves' Lane Adams (16) is greeted at the dugout by hitting coach Kevin Seitzer (28) , left, and manager Brian Snitker after hitting a three-run home run during the sixth inning of the team's baseball game against the San Francisco Giants on Thursday, June 22, 2017, in Atlanta. (AP Photo/John Bazemore)

By CHARLES ODUM, AP Sports Writer
ATLANTA (AP) — Lane Adams delivered a pinch-hit, three-run homer in Atlanta’s eight-run fifth inning and the Braves beat Matt Cain and the San Francisco Giants 12-11 in a rain-delayed game Thursday night.
The Braves won three of four in the series to cap San Francisco’s 1-7 road trip.
Adams’ homer was the first of his career.
Brandon Phillips led off the big inning with a homer off Cain (3-7), the first of six straight hits. The Braves finished with nine hits in the inning.
The Braves and Giants combined for seven homers, including four by Atlanta, and 31 hits. Nick Markakis hit a two-run homer in the first. Matt Adams hit his third homer of the series, and 13th of the season, in the fourth.
Braves closer Jim Johnson gave up two runs in the ninth but got his 14th save in 19 chances.
Buster Posey drove in three runs with a homer and two doubles for San Francisco. Joe Panik led off the fifth with a homer. Brandon Belt hit his 13th homer off Ian Krol in the eighth.
Cain doubled in two runs in the second, but he couldn’t hold a 5-2 lead. Cain fell to 0-5 in eight road starts as he allowed seven runs and 10 hits in four innings. He gave up a season-high three homers.
The Giants led 6-4 before the Braves took a 12-6 lead in the fifth. Matt Adams’ run-scoring single tied the game. Kurt Suzuki gave Atlanta the lead with a single that drove in pinch-runner Danny Santana.
Posey and Austin Slater drove in runs with doubles off Jaime Garcia in the third.
Garcia allowed six runs and seven hits in 4 1/3 innings. Rookie Jason Hursh (1-0) recorded the final two outs in the fifth for his first major league win.
Johnson gave one-out singles to Nick Hundley and Denard Span in the ninth before walking Belt to load the bases. Hundley scored on Kelby Tomlinson’s fielder’s choice grounder, and Panik’s fly ball to left field cut the lead to one run. Hunter Pence’s grounder to second base ended the game.
Rain delayed the start of the game for the second straight night. The delay lasted 1 hour, 26 minutes.
TRAINER’S ROOM
Giants manager Bruce Bochy said a decision will be made soon on IF Conor Gillaspie, who has missed 32 games with back spasms. He has played the last eight games with Triple-A Sacramento. A move with Gillaspie could be connected to the status of 3B Eduardo Nunez (left hamstring), who likely would need to show improvement Friday to avoid the DL.
RIO RUIZ SENT DOWN
The Braves optioned 3B Rio Ruiz to Triple-A Gwinnett and recalled IF Jace Peterson. Ruiz lost playing time to Johan Camargo, and the Braves want him playing on a regular basis in Gwinnett. Ruiz, 23, hit .175 with two homers in 80 at-bats. “It’s not going to do him any good at his age to sit up here and pinch-hit,” said manager Brian Snitker. Peterson was optioned to Gwinnett on June 2. He was hitting .245 in 106 at-bats with Atlanta.
UP NEXT
Giants: LHP Ty Blach (4-4, 4.23) will start in the opening game of a home weekend series in his first career appearance against the Mets on Friday night.
Braves: RHP Mike Foltynewicz (4-5, 4.26) will open the weekend series against Milwaukee on Friday night. Foltynewicz allowed four runs in six innings in a 4-3 loss at the Brewers on April 30.
___
More AP baseball: https://apnews.com/tag/MLBbaseball