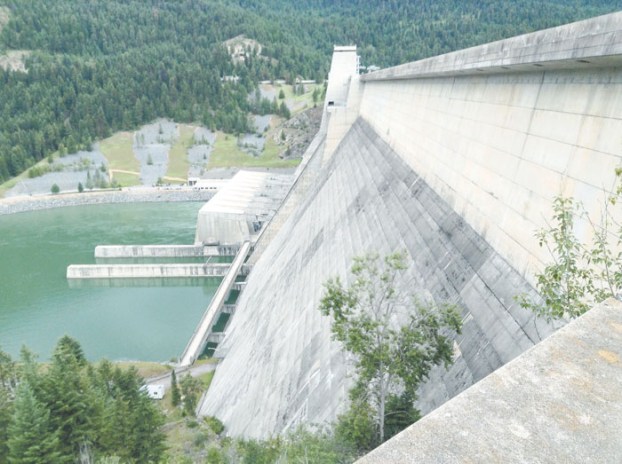 A huge dam on the Kootenai River near Libby, Montana is called the Libby Dam. David Freeze/for the Salisbury Post

David Freeze: From Libby to Eureka with plenty of hills

As good as Monday was, I didn’t expect anything close Tuesday, and that is exactly how it turned out.

My ride was scheduled to be in Montana from Libby to Eureka without so much as a decent crossroads in between. On the Adventure Cycling maps, it tells you not to expect any supply points, so I had plenty in my bags to cover what looked like a challenging ride.

The evening before in Libby turned out to be pretty good. The Country Inn had free freshly baked cookies and water and an all-day breakfast restaurant next door. Perfect for me.

After my planning was done, I had hoped to turn in early. It was still bright enough outside at 10 p.m. to throw and catch a baseball. First decent for riding daylight came about 6 a.m., and I hit the road. The elevation map showed endless challenging hills, and that is exactly what I knew I would get.

There were a couple of things about Libby that I found interesting. It was reported to have been the site of the first fur trading business in the Northwest, aptly named the Northwest Trading Co. Also, in the early 1900s, vermiculite was discovered nearby and at one time supplied 80 percent of the world’s needs. W.R. Grace and Co. bought the rights, but because Libby vermiculite contained asbestos, a significant number of local workers died from exposure.

Just out of Libby, I pedaled on State Road 37 for about 15 peaceful and scenic miles along the Kootenai River. Nothing challenging in the early terrain changed when I approached the Libby Dam.

State Road 37 had been rerouted during the construction of the dam, and they made an aggravating road for sure. The next 25 miles passed slowly with little scenery except trees and the next hill. The river didn’t return to sight until about 45 miles into the trip. The body of water was actually then called Lake Koocanusa because the river water for the lake was held back by the dam.

Finally, as I climbed one of the more scenic hills, I saw Theresa Lawrence starting to climb a huge rock wall beside the road. Rob Larsen was belaying her from the ground. Rob said that there are many rock climbing venues along State Road 37 and that they had came from Sparwood, British Columbia, to enjoy them. I watched Theresa climb and found it fascinating.

Funny thing is the weather had been changing all morning. Still and mild in Libby became drizzly and chilly by late morning. By the time I saw Rob and Theresa, the sun had come out and the wind was really blowing. It also got hot quickly. It was mid 80s by midafternoon.

I kept riding, hoping to end the day in Eureka by 4 p.m. I made it after 70 miles and not much else to show for it. I saw a couple of deer, a possible eagle, and a huge new bridge that had an eerie sound coming from it. All the cables and connectors must have made the noises because of the strong wind.

My room for Tuesday night was in Eureka at the Silverado Motel, and it has great WiFi. I hoped to work more on the cyclometer after talking to the company’s technical person late Tuesday afternoon.

Today should see me headed to Whitefish, Montana, mostly on State Road 93.

One thing for sure, there are not many roads out here. My goal is to figure out how much I can see of Glacier National Park and how to enter Alberta, Canada, afterward. Bikes can be in the park only at certain times because of heavy traffic; snow clearing is also a factor. I actually was about 10 miles from a Canadian border crossing Tuesday night.

Very early Tuesday morning, I spotted what looked like a Bigfoot running with a bag of money from one of the Libby banks. I know a little cash will help out when necessities arise in the deep woods. In fact, I saw a few places that just 20 feet from the tree line were in pure darkness.

The last sponsor on my list is Leonard Wood, an avid cyclist and the main reason the Great Berry Ride at Patterson Farms has such great courses. Leonard is also familiar with the Glacier area, and I will probably use that expertise in the next few days.

So with that, I will close for the night. Big days are coming, and there are people and places to see.

Kannapolis carousel is double the fun

KANNAPOLIS – A double-decker carousel at Village Park in Kannapolis is now open for the young and young at heart... read more