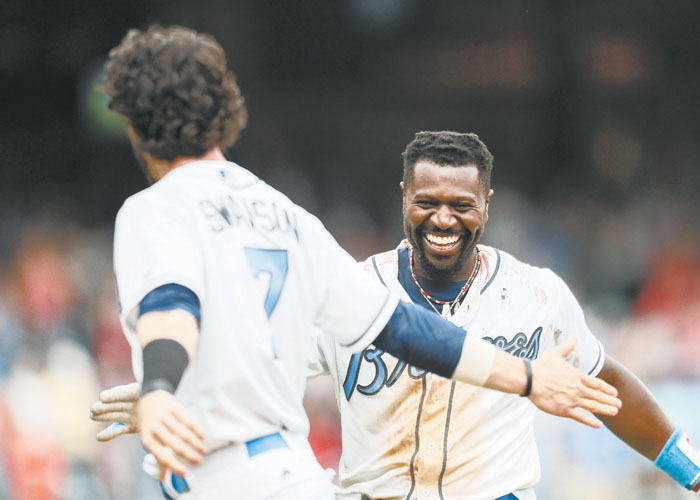 Atlanta Braves Brandon Phillips (4) celebrates his game ending single with Dansby Swanson (7) at the conclusion of the tenth inning of a baseball game against the Miami Marlins, Saturday, June 17, 2017, in Atlanta. The Braves won the game 8-7. (AP Photo/Todd Kirkland)

ATLANTA (AP) — Brandon Phillips is swinging a big bat at home in his first season with the Atlanta Braves.

Phillips drove in the winning run in the bottom of the 10th inning, Matt Adams had four RBIs and the Atlanta Braves rallied from a four-run deficit to beat the Miami Marlins 8-7 on Saturday.

“For myself, my first walk-off win as a Brave, it really means a lot, playing in front of my family and friends,” he said. “It just shows our grind as a team. We’re never out of any game.”

Johan Camargo led off the 10th with a single, advanced on a sacrifice and scored when Phillips singled up the middle off A.J. Ramos (1-3).

Nick Markakis’ RBI double in the ninth sent the game into extra innings. Arodys Vizcaino (3-2), the seventh Atlanta pitcher, faced four batters in the 10th to get the win.

The Braves had lost five of seven overall and eight of 11 at home, but they overcame an uncustomary rocky start by pitcher Jaime Garcia to cool off the Marlins.

Adams hit his 10th homer in the first and had RBI doubles to make it 3-0 in the third and 7-6 in the seventh.

Phillips’ last game-ending RBI was four years ago for Cincinnati. He has seven in his career.

Phillips has returned to his hometown with a flourish. The longtime resident of Stone Mountain doubled to begin the ninth and scored on Markakis’ double. He’s hitting .325 with 11 RBIs in 117 at-bats at SunTrust Park.

“After this, I’m going to do some push-ups because I thought that ball was gone,” Phillips said. “But I’ll take the double, and I ended up scoring, so it feels good.”

Tyler Moore homered and Christian Yelich doubled in a five-run fifth inning for Miami, which had won three straight and 13 of 18 behind a surging offense.

“We’ve got to turn the page and not let this snowball,” second baseman Dee Gordon said. “We’ve been playing good baseball. We have to have a (short) memory. This was just a little punch in the chest.”

Ramos gave up four hits and two runs in 1 1/3 innings to blow his first save since last Aug. 29. He had converted 17 straight chances.

“The slider was obviously up (against Markakis) and the two-seamer in the 10th was down the middle,” Ramos said. “I have a feeling he knew it was coming and I don’t care, because if I execute the pitch he doesn’t do anything with it.”

Jaime Garcia retired eight of the first nine batters he faced and was staked to a 3-0 lead before he unraveled in the fifth.

Moore tagged him for a two-run homer. A balk and a passed ball advanced a runner. Suzuki tied it with a single, and Yelich, who has five RBIs in the last two games, added a two-run double.

Garcia had a 1.49 ERA in his previous five starts, but he gave up seven hits, two walks and a season high six runs to go with seven strikeouts in 5 2/3 innings.

The Braves began the day having scored just nine runs in its previous six home games and kept the trend alive with Danny Santana, Ender Inciarte and Dansby Swanson combining to strand four runners at third with two out.

MINNEAPOLIS (AP) — Jose Ramirez homered twice, doubled and drove in four runs as the Cleveland Indians pulled even with Minnesota atop the AL Central by beating the Twins 9-3 Saturday in the first game of a day-night doubleheader.

Ramirez touched off a three-run first inning with a two-out homer off Adam Wilk (0-2). He chased the spot starter with a two-run double in the fourth and added another solo shot off Alex Wimmers in the sixth. It was the second multihomer game of Ramirez’s career, both this season.

Joyce reached base five times, Jesse Hahn (3-4) pitched five innings to defeat New York for the first time in his career and Jed Lowrie had an RBI single to keep the A’s rolling at home. Oakland has won six of its last eight at the Coliseum, including three straight against the Yankees.

Austin Romine and Brett Gardner drove in runs for New York, which has lost a season-high five straight. The Yankees entered the day with a one-game lead over Boston in the AL East.

Joyce homered leading off the game against Masahiro Tanaka (5-7).

Sean Doolittle retired three batters for his second save.

Adam Lind added a two-run shot and Jose Lobaton also went deep for the NL East leaders, who can finish a four-game sweep Sunday afternoon. Washington is 6-0 in Queens this year — part of an impressive 24-12 mark on the road — and has won 12 of 16 at the Mets’ home ballpark since the start of last season.

Strasburg (8-2) permitted two runs and six hits in 5 1/3 innings, rebounding from his worst start of the season. He struck out five and walked two.

MILWAUKEE (AP) — Cory Spangenberg and Chase d’Arnaud each hit solo home runs in the 11th inning, lifting San Diego over Milwaukee in yet another slugfest.

The teams have combined for 15 home runs in the first two games of the three-game series. The Padres totaled a season-best five home runs Saturday, including two by Yangervis Solarte and one by Wil Myers, while Milwaukee got a homer each from Orlando Arcia, Eric Thames and Keon Broxton. On Friday night, Thames’ game-ending shot in the 10th was the seventh home run of the game.

PITTSBURGH (AP) — Gregory Polanco broke out of a slump with a two-run homer, Andrew McCutchen hit his 12th home run of the season and Pittsburgh edged Chicago.

Ivan Nova (7-4) pitched seven strong innings and Pittsburgh’s bullpen made it stand up a night after collapsing late in a 9-5 loss. Felipe Rivero got the final five outs for his third save.

Altuve led off the third with his homer off the train tracks above the left-center field facade, and Beltran followed three batters later with his ninth home run of the season to put Houston ahead 6-0.

Adam Jones and Mark Trumbo got Baltimore started with successive first-inning shots, and Schoop finished the long-ball display with drives in the fourth and seventh.

CINCINNATI (AP) — Yasiel Puig hit two of the Dodgers’ four homers, powering Los Angeles to a victory that took the edge off Cincinnati’s latest honor for its banned hits king.

Pete Rose unveiled a bronze sculpture of his headfirst slide in front of Great American Ball Park before the game. Thousands of packed-in fans cheered when he said, “Let’s get those Reds in high gear.”

Instead, the Dodgers flexed their muscle and added to their domination of Cincinnati, beating the Reds for the seventh straight time.

The Rockies are 9-1 against San Francisco this season and have won the last eight against the Giants.

Meyer (3-3) pitched the best game of his young career, allowing two hits and a walk while striking out nine.

Martin Perez (3-6) won for the first time since May 18. He left with a 5-4 lead with one out in the sixth after giving up a 463-foot, three-run homer to straightaway center by Mike Zunino.

PHILADELPHIA (AP) — Paul Goldschmidt hit a two-run double and also made a key catch, boosting Arizona over Philadelphia for its sixth straight victory.

Mike Pelfrey (3-5) earned his second road win of the season, limiting Toronto to one run and four hin the 10th to get the win.

Louisville plans to appeal NCAA sanctions that include Pitino’s suspension for five Atlantic Coast Conference games and a 10-year show-cause order for McGee. Powell wrote that McGee paid her $10,000 for 22 shows from 2010-14 in Louisville’s Billy Minardi Hall dormitory.

The governing body also placed Louisville on four years’ probation and ordered the vacation of victories in which ineligible players participated. Players deemed ineligible would be those involved in the sex parties, which are considered impermissible benefits.

Compliance consultant Chuck Smrt estimated that as many as 108 regular season games and 15 NCAA Tournament games are in question, including Louisville’s 2013 national championship and 2012 Final Four appearance. The NCAA accepted Louisville’s self-imposed ban from the 2016 postseason.

During the Facebook Live interview, Powell said she held no grudge with the school, but added that “they knew what it was going in.”

“At the end of the day I have to live with what I did, the decision that I made,” she added.