A day of challenges: Hills and headwinds make for long ride 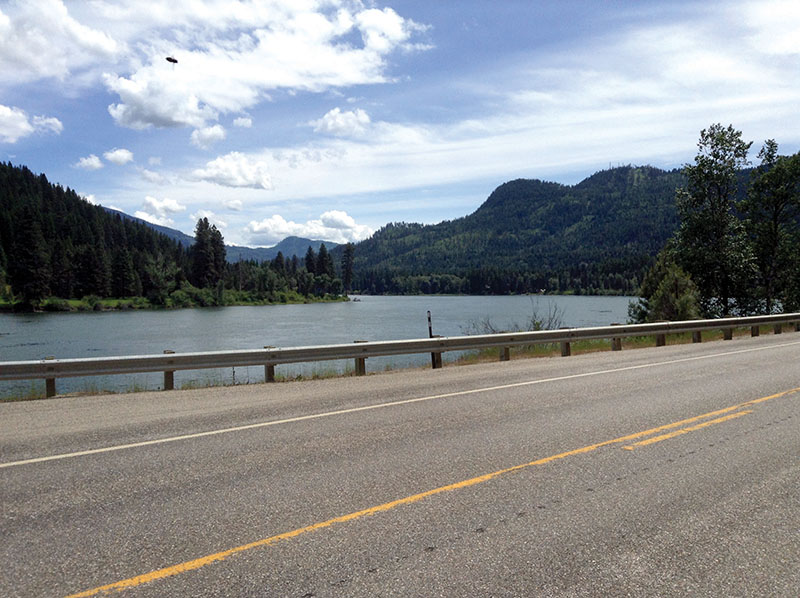 David Freeze rode beside the Columbia River Saturday afternoon for 46 miles. It now joins the Mississippi and Ohio as his favorite rivers. It is wide, green and absolutely beautiful. Photo by David Freeze, for the Salisbury Post.

A day that starts with a hill climbing out of town is probably not going to be the easiest day. This one wasn’t. I woke up early at Benny’s Colville Inn and found it to be cold enough to wear everything again as I rode out of town. First turn, first hill.

That hill was bigger than my legs as most early morning ones are. I got up it and then, about 10 miles out of town, I tried another significant hill and found my front tire was flat. Better front than rear because it was a quicker fix. Afterwards, more rolling hills topped out at about 3,200 feet before a long descent down to the crossroads of Tiger, formerly a boomtown but now only an original store remains. It has been converted into a museum.

Before I leave Colville, last night’s lodging, I need to mention a story about it as a Wild West town. Seems an Army lieutenant shot a citizen in cold blood, just one of a bunch of tawdry things going on. He wasn’t convicted because nobody would testify against him. The town authorities got together and decided to disband the local distillery and confiscate all the whiskey. Things cleared up in the formerly lawless town.

After stopping in Tiger, where I talked to the volunteer in the store museum and missed talking to another long distance cyclist, I turned into a significant headwind for 46 miles to Newton where I am staying tonight. On the way, I only passed a couple of small crossroads communities and luckily got some extra water at Tiger. It was a long and tough ride against the wind but was made bearable because most it was along the beautiful Columbia River. The Columbia was also the river that I saw in Astoria, Oregon, at the beginning of my 2013 trip. It is wide and beautiful, right up there in size with the Ohio and almost as big as the Mississippi.

My cyclometer, or bike odometer, also went on the fritz today. Mileage and miles per hour were sporadically working today, but I did get 83 total miles.

Kudos to Father and Son Produce for joining with me again to sponsor this ride. Go see Tim and Linda Hoffner for the best selection of affordable produce and lots of other stuff, too. Tim has a big selection of candy that he says is healthy for you.

Tomorrow, I will head into Idaho, still in the Pacific Time Zone. After just a couple of days, it will be on to Montana and the Mountain Time Zone. Andy Mooney and Bobby Parker, Salisbury Post copy editors, will get more time to process my updates and I will be less rushed to get them in.

Thanks to everyone for riding along again.