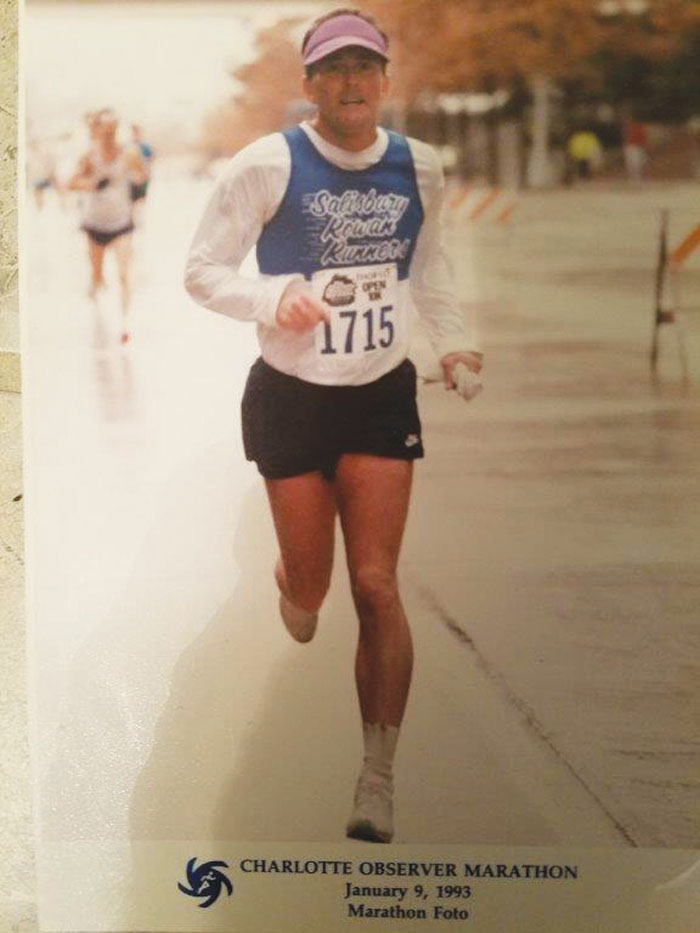 Mike Julian, one of the best of all time locally

From the late ’70s and into the ’90s, one local runner stood out among a group of very strong competitors for the local race wins. As you have heard me say before, those days were much different than the local racing scene is now. Races were hard to find back then and everyone within 50 miles was likely to have a very strong field. In my opinion, Mike Julian was the best over nearly two decades in Salisbury.

Mike started running during his sophomore year at Boyden High. He said, “I went out for football, but as an offensive guard at 155 pounds, I was getting mauled. Basketball had some great players, so I couldn’t start. In track, they needed distance runners so I gave it a whirl.”

Mike had some talent but didn’t break out until the Winston Salem meet. Three milers had swept the top three places so far that season and had received a huge write up in the Winston Salem paper. Mike added, “I ran behind them until the last lap, felt a huge burst of energy, and passed them like they were standing still. That sent my confidence over the top and allowed me to win every meet for the rest of the season.”

Boyden didn’t have a true running coach, so Mike just winged it in practice until he broke the school record with a 4.29.8 mile in his last meet in 1966, eclipsing a mark set back in 1948. Then it was on to Catawba College where Mike was offered a football managing scholarship if he would also run. With a full-time job, his studies and school, running got sidetracked until much later.

Friends at the Y asked Mike about running a half marathon with them in 1974. He started training again, dropped the 20 pounds he had gained since high school and got hooked. A first marathon with a good time of 3 hours and 15 minutes made Mike want more. Another 11 marathons followed with a personal best time of 2 hours and 40 minutes in the 1982 Charlotte Marathon, good enough for second place in his 30-39 age group.

A succession of road races included 52 5Ks (they were hard to find then), 112 10Ks (the most popular distance for Mike and running in general at the time) and 12 half marathons. Mike knows this because he has always been a meticulous record keeper, logging every single one of his 48,921 miles to date. Most impressive from his race list was a 33:01 10K personal best. Those stats make Mike the second fastest male Rowan County marathoner in history.

The triathlon became popular and Mike found it a natural fit for his abilities and gimpy knees. His best triathlon performance came at an Ironman in Cape Cod, Maine, clocking a 10 hour and 42 seconds finish time over the 2.4 mile swim, 112 miles biking and 26.2 miles running. Mike found the triathlon good training and diversity and completed 34 of them. He said, “I never raced to just finish an event, I always wanted to beat as many as I could, especially the younger age division winners.”

The training log looks a little different today. There is a slot for running, swimming, cycling and even rowing. Mike, now 68, said, “The drive and competitiveness eventually caught up with me. I ended up getting both knees replaced, but I have no regrets. I am still doing it all and enjoying it every day. I no longer have the desire to compete, I have nothing to prove…my best is behind me.”

Watching his three grandkids compete brings special joy for Mike. Noah, Eli and Hope Julian are very successful young runners for the YMCA Warriors. Parents and quality runners themselves, Scott and Rebekah (Frick) Julian are passing on their own family genes and mentoring the kids along with Mike.

He said, “I love to experience the success they are having. It brings back memories of doing the training, reaping the awards, sometimes when you least expect it. I hope they keep their running logs and break all of my records.”

The next race is the Shiloh Run for Missions 5K in Faith on Saturday, July 1, followed by the Run for the Greenway 5K in Salisbury on July 15. More info is at www.salisburyrowanrunners.org