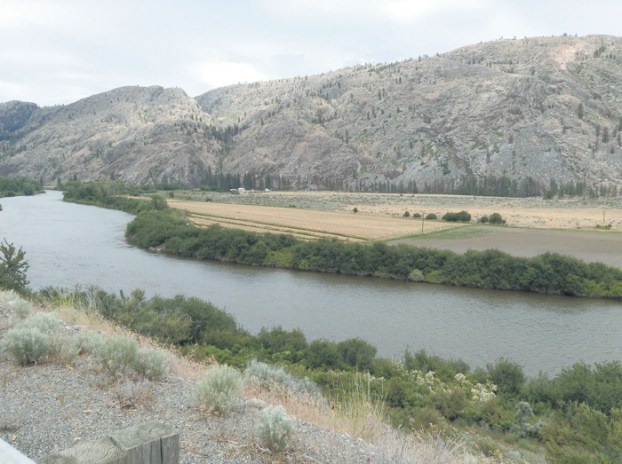 The scenic river valley in the town of Omak, Washington. David Freeze/For the Salisbury post

David Freeze: Crossing the mountains into the desert

Tuesday was a blur with climbing the Washington Pass and pushing hard until just before dark to find a room. I forgot to mention that I was so tired that the helmet strap wouldn’t unhook. Maybe I couldn’t squeeze it hard enough.

After sending in Wednesday’s story from beside the road — a first — I thought it would be easy to find a room in Winthrop, Washington. The first three places I called had expensive rooms and didn’t care that I would only sleep and then be gone early.

I found The Virginian, a great place with really nice cabin-like rooms and a view of the river and mountains. The price was reasonable, and the owner let me pick up a key without paying for the room until morning.

This would be a nice place to spend a few days in what is considered a resort town, made up to look like the streets of the Old West.

Just before leaving Wednesday morning, the owner told me that State Road 20 was closed for major repair work just on the other side of Twisp, the next town.

We decided that I should ask the police what they thought. I got to speak with Police Chief Paul Budrow. He helped and also pointed me toward a great grocery store called Hank’s. My first egg and cheese biscuits for the trip were purchased from the deli.

I was loaded and ready to go.

Winthrop has a little more than 400 residents, and Twisp about a thousand. I even checked in at the beauty shop.

I met Michael Miller whose wife, Marilyn, puts a cooler beside the road for weary and thirsty cyclists. They live on Route 20 along the climb to the Lolo Pass, and she looks forward to the road being open again.

I was able to get around the climb and ended up in a different world in the next valley over. The huge fir trees were gone and a high desert with few trees on the majestic mountains became the norm.

Lots of farming, including apple and cherry production, was the first thing I saw. Hundreds of acres of beautiful fruit trees were under bird meeting. They also had big wind turbines in the fields, I suspect for frost protection. Plenty of hay fields, too, that were being either watered Wednesday or were being cut.

Most of this was between Okanogan and Omak, a real town because it has a Wal-Mart. I heard that phrase again Wednesday. Both of these towns have 3,000 to 5,000 residents. I love these river towns in the area because the water seems so clean and the residents embrace them with parks and viewing areas.

I passed by Riverside as I stayed on State Road 20 into Tonasket, a beautiful little town just at the base of tomorrow’s climbing. On the way into town, I was flagged down by a farmer offering me a place to stay. This town also offers free camping in the park for cyclists.

I stopped at the Red Apple Inn after getting a fair price. The owner is my favorite of the trip so far, having run the New York City Marathon twice.

This too is a wonderful place. I will have more on the owner Friday.

The western time zone puts me behind when I get up and with all of the climbing, these have been very long days. The guys at the Post have worked with me to get the updates in before deadline. I came very close to missing that deadline last night.

Today will probably have two major climbs. My legs were out of gas Wednesday and the quads were tender in a few areas after Tuesday’s big climb. I will admit to not liking the climbing nearly as much as visiting the towns where I have a better chance of meeting people.

Idaho is just a couple of days away, and I am looking forward to it. Today’s total mileage was 72, all I wanted after Tuesday. It was warm, topping out in the valleys at about 75 after being very chilly to start the morning. No ice cream yet, but it may not be far away.

Thanks for all the great emails about the trip, especially those about the prayers. I can’t get enough of those.

The Salisbury-Rowan Home Builders Association has awarded six scholarships for the 2017 year. The association awards scholarships to students who are in... read more