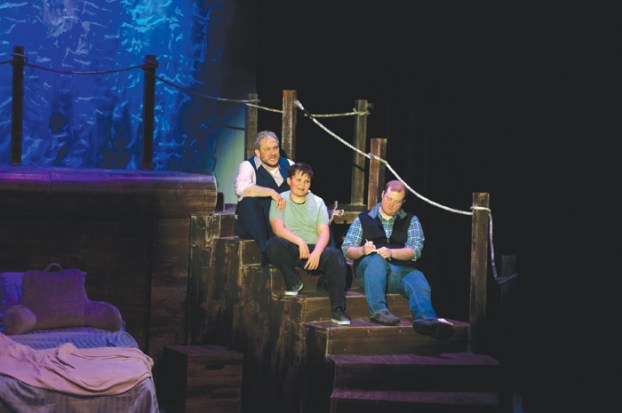 Tommy Foster as Edward, Blake Barrier as Young Will, and Nick Culp as Will. Photo by Caitlin Billings

Don’t flounder around; get up and go see “Big Fish: The Musical” at Lee Street theatre.

You’ll find a delicious story, talented performers and music that is fun, uplifting and sweet.

Based on the book by Daniel Wallace and the movie of the same name, which had a stellar cast and Tim Burton for a director, this musical has a lot of heart. It’s feel-good and sad, silly and tragic, but with a great message about how magical the world is.

Edward Bloom is a traveling salesman with lots of tall tales to tell, along with some bad jokes. He’s larger than life in his small town in Alabama. He likes to laugh, he likes to enjoy life. Now his son, Will, is getting married, and the two struggle to find a solid father-son relationship.

Edward has done well, but Will, now a journalist, is skeptical of all the nonsense he heard as a child — that his father joined a circus, that he met a giant, that a witch told his future. He’s sure his father is just overcompensating for his absence, or outright lying to hide something. The play is about Edward’s life and his son’s attempt to reconcile reality and those stories.

Tommy Foster is Edward Bloom — the big fish in a small pond. Foster has it all: a great voice, full of emotion, power and tenderness. He can dance, too, and he so inhabits the character that you will believe his tall tales and wonder why his son is so disbelieving.

He has several great numbers, including “Be the Hero,” in which he tells his son to be the hero of his own life.

Nick Culp plays the skeptical son, the one who thinks his father is just a liar. Culp, too, is wholly believable and a fine singer. His misunderstanding creates a river between the two men.

Caroline Stephenson plays Edward’s wife, Sandra, a sweet, forgiving woman who deeply loves her husband and hates the rift between him and their son. Stephenson sparkles at times and plays the caring mother and wife well. She’s completely sympathetic, and when she sings “Magic in the Man,” it’s a wonderful affirmation of faith in Edward and his tales.

Edward and Sandra’s “Time Stops” is a touching description of love at first sight. Foster, as Edward, can be heartbreakingly sweet as easily as he can be full of bluster.

Blake Barrier is young Will and a host of other young men in the play. He’s cute and believable, and he manages to let the audience know he loves his father, even if he doesn’t believe him.

Karina Moran is so touching as Jenny Hill, the girl who falls in love with Edward in high school and never forgets him. She, too, has numerous parts, and each one of them is distinctly different.

The ensemble cast does a fine job, as well. Somehow, the giant Karl, played by Brian Rassler, is the most touching, coming out of his cave only when Edward convinces him there’s a beautiful world waiting for him.

Cassandra Barrier is the witch who tells Edward how he will die, and she shows up as several other characters. “The Witch” is another fun musical number.

Caleb Garner as Don Price and Colin Samole as Zacky Price are a charming pair of hicks Edward hangs out with. They stay behind in their small town when Edward goes to see the world, only to meet up with him at a crucial time later on.

Rona-Lyn Dizon is Josephine, Will’s wife-to-be, and another one who wants Will and Edward to patch things up. She’s a stabilizing and convincing force for Will, torn between love and anger.

Pete Barr is Amos, the circus owner with a secret, well … a few secrets. He takes advantage of Edward but ultimately gives him an amazing gift. Barr also has several other roles.

Let’s see, there’s a giant, a witch, oh, and a mermaid, played swimmingly by Alaina Newell.

Craig Kolkebeck has again directed a marvelous cast well. He gets the emotional ramifications of “Big Fish” and he has a big heart himself, so that this musical beats with a powerful rhythm that says life is what you make of it.

A great orchestra, conducted by Adrian Smith is not overpowering but simply solid, with guitar, drums and strings.

Mavis Scully did the lively choreography. Chris Speer did his usual excellent job on the sets and great lighting. Nancy Gaines was the costumer — and there are lots of costumes.

The presenting sponsors for “Big Fish” are Salisbury Pride, Alfred and Lyn Wilson, and Pottery 101.

By Jessica Coates jessica.coates@salisburypost.com An intoxicated man wearing a kilt and with an assortment of tactical weapons was found on... read more