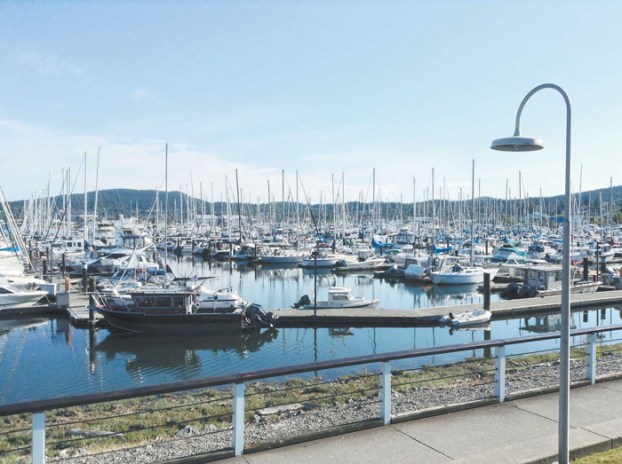 David Freeze: Waking up to the sound of sea gulls The William Preston is a stern wheeler that was used to clear stumps in the local waters by dragging cables underneath. June 12, 2017. David Freeze/For the Salisbury Post

On my first day in the Northwest, my body clock wants to get started.

I am writing this just after 5 a.m. Monday while I wait for the bike shop to open at 10 a.m.

I spent the night in Anacortes, Washington, a beautiful little town of about 16,000 with one of the biggest marinas that I have seen. It is chilly in the low 50s here, cloudy and breezy as well.

Temperatures for the week are supposed to rise slightly with extremes over the mountains. My gloves are ready.

I confirmed Sunday night that I will have only sporadic cellphone coverage over at least the next two weeks.

The last good coverage would end before I got to my stop for Monday night in Rockport. Supply stops are few and far between as well.

Just a few words about Sunday’s travel. Of course, I prayed as usual for the Lord to ride with me, just as I will continually for the rest of the adventure.

Both flights went very well, but the Houston to Seattle flight was unusual. To start with, a flight attendant dropped a bottle on my head from the overhead bin. There was lots of concern but only a small amount of blood.

Throughout the flight, arriving 40 minutes ahead of the scheduled four hours, I talked with Danielle, an interesting mother of two who was nervous about the flight. Usually, I am very quiet or even sleeping.

Because of the early arrival, I got on the bus to Anacortes two hours early and arrived in time for plenty of daylight sightseeing. A good day all around.

I picked up the bike, added a flashing light for the back and went to find a place with accessible water. I needed the water to make the usual photo with the bike tire in the water to signify the ceremonial beginning of the cycling adventure. Once I found water, I couldn’t find anyone to help me with the picture. Too much time had already expired, so I decided not to waste any more time and did a selfie. Not my best work.

Finally the riding began. I left Anacortes and rode through Fredonia on State Road 20, which will be my main road for the first five to six days of the trip. Next came Burlington and Sedro Wooley, the town that logging built. I bypassed Lyman and Hamilton as the size of the towns decreased.

Next came Concrete, a town that I had heard of before because fellow cyclist Leonard Wood had traveled through it on the way to some vacation time. I finished up for the night just past Rockport, a town where the only store had closed. They do have a motel called the Totem Trail, and that is where I would spend the night after 62 miles.

The climbing has begun, the forests are thick and there aren’t many people around. It is still chilly, and I would probably run the heat Monday night. On Tuesday, I will climb over Washington Pass at 5,477 feet. I am at about 600 feet in elevation now. That individual climb in one day will be the biggest I have attempted.

It will be a challenging day. I will let you know what happens. Thanks to so many folks from Rowan County who are following this new adventure.

By Rebecca Rider rebecca.rider@salisburypost.com SALISBURY — When Meredith Abramson logged onto her new laptop for the first time, she put her... read more