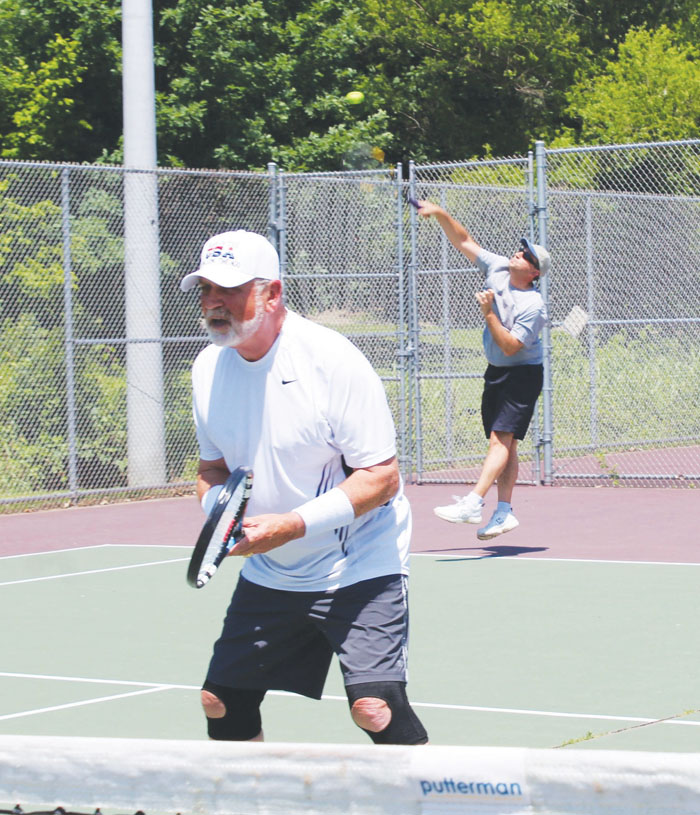 Submitted photo ... Greg Yousey served up great tennis with his dad, Don Yousey, from Wilmington, The pair teamed up again this year to compete in the Men’s 50 Doubles division of the Salisbury Rotary Spring Tennis Tournament.

Adults and juniors competed in 20 events, including singles, doubles and mixed doubles.

“As the score showed, it was a really close match,” Gray said.  “We had long rallies and great points.  I knew I had to be more aggressive at the end.  My strategy worked and I was really happy to come away with the win.”

Some players didn’t win trophies but won in other way. Don Yousey, who is in his 70s, traveled with his wife, Carol, from Wilmington and partnered with his son, Greg, in the men’s 50 doubles.

“My dad taught me to play tennis when I was 7 or 8,” said Greg, the director of clinical services at Nazareth Children’s Home. “This tournament provided a fun, family atmosphere … and yes, great tennis.”

Mike Meyerhoeffer played in mixed doubles with daughter Sallie Kate and then watched the Meyerhoeffer sisters advance to the women’s doubles final.

“I don’t think Kirsten and Sallie Kate have ever played doubles together in a tournament,” Mike said.  “But win or lose, this tournament is about having fun and spending time with family and friends. It warmed my heart to see my girls on the court with great smiles and sportsmanship. I hope it sparks them to play more tennis. That’s the win for all of us.”