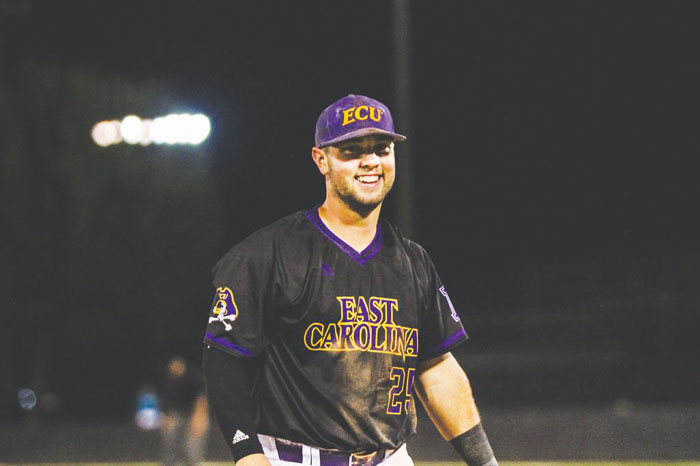 GREENVILLE, N.C. — Eric Tyler batted .343 as an East Carolina University senior, led the Pirates with 17 doubles and tied for second on the team with 38 RBIs.

The third baseman was voted first team All-American Athletic Conference, but he may have played his last baseball game.

At a stocky, 5-foot-8, 210 pounds, Tyler doesn’t match the physical description of typical draft picks. He’s not a swift runner. Nor does he possess an especially powerful arm. What has made him such a great baseball player are the knowledge in his head and the vastness of his heart. Those are the two things pro scouts can’t measure with stop watches.

The MLB draft begins on June 12.  Tyler will be following it.

“I’ll be following the draft, and I’ll definitely keep my fingers crossed,” he said. “But it’s not like the scouts have been beating my door down. I’ve talked to a few, but I’ve tried to keep my expectations realistic.”

If he’s not drafted, the next phase of Tyler’s life is already in place. He won’t be leaving baseball. He’s set to become a graduate assistant for the East Carolina program next season.

He’s finishing up his degree in parks and recreation with an internship, and as a grad assistant he’ll pursue a master’s in sports management.

“I’m just really fortunate to have the opportunity to begin my coaching career at East Carolina,” Tyler said. “It’s a place that’s been great to me.”

When he graduated from South Rowan High in 2013, Tyler had carved out a well-earned reputation as a special leader and a competitive athlete. He was decent in basketball and football while starring in baseball for coach Thad Chrismon.

He was a catcher then, and a good one, but he didn’t hit with the power of a typical Division I recruit. He hit just four homers in his high school career. By Tyler’s senior year, South had another promising catcher, Matt Honeycutt (now at Mars Hill), so Tyler spent “rest days” playing in the infield and outfield. The versatility that he showed was a sign of things to come.

As a college freshman, Tyler had his struggles offensively and defensively. The adjustment to hitting and catching D-I pitchers (such as current Colorado Rockies’ Jeff Hoffman) was a big jump. Tyler batted .183 in 71 at-bats.

The constant for Tyler throughout his career was ECU assistant Dan Roszel. Roszel recruited him and always had faith in him. Even after most of the staff changed, Roszel stayed in Greenville.

Cliff Godwin was hired as East Carolina’s new head coach prior to Tyler’s sophomore season. Godwin is a hitting guru and Tyler began progressing at the plate, mentally and physically.  Godwin provided a consistent hitting plan for Tyler, who had been constantly tweaking his mechanics and trying a lot of different things.

Tyler batted a respectable .268 as a sophomore and drove in 27 runs. He did enough offensively that the Pirates started finding creative ways to get his bat in the lineup. He became a utility guy, playing all over the place— catcher, first base, third base, right field and left field.

Tyler had earned himself a regular position. The summer between his sophomore and junior years he fielded ground balls  every day as assistant coach Jeff Palumbo turned him into a full-time third baseman.

As a junior, Tyler batted .306 with five homers and 36 RBIs. He hit two homers, including a grand slam, and drove in eight runs in a single game against Jacksonville. That’s the day he belted a three-run homer on a changeup and pulled a fastball off the foul pole for a grand slam.

Tyler’s senior year was supposed to be the really special one for the Pirates. In the preseason they were were perceived as a team with the talent to go to Omaha. But then came a string of freak injuries.

“Our All-America pitcher (Evan Kruczynski) gets hit by a line drive and breaks his ankle,” Tyler said. “Our senior first baseman (Bryce Harman) breaks a wrist and our freshman All-America outfielder (Dwanya Williams-Sutton) breaks his thumb. The injuries piled up. For a long time, we just stopped playing good baseball and we lost a lot of games we should’ve won.”

The Pirates’ were staggeringly unlucky. Chris Holba, the pitcher who stepped in for Kruczinski, did well. Then he was hit in the face by a line drive and was lost for several months.

East Carolina tried to make a late run. The Pirates weren’t going to make a regional unless they won the conference tournament, and they battled to the final before losing to Houston. Tyler had two hits in his last college game.

“The pain is still fresh from the season and it’s still hard to talk about it,” Tyler said. “We always believed losing was never an option, and I was proud of how much fight we showed at the end and I was proud of all my teammates. We had nine seniors, and that’s almost unheard of these days with transfers and the draft, but we had year filled with adversity. I guess the one word that sums it up best is disappointing,”

Individually, Tyler was at his best as a senior. He had career highs in just about everything.  He was among the conference leaders in batting average, hits, doubles and total bases.

It’s typical Eric Tyler that when he’s asked about his most memorable accomplishments, all-conference and that eight-RBI game don’t rank all that high on his list. It’s the team stuff that meant the most to him. He and his fellow seniors rank second all-time when it comes to career wins at ECU.

“Being part of a team that won the conference (2015) and winning the Charlottesville regional (2016) are definitely the biggest thrills,” Tyler said.  “Getting to play in the Super Regional in Lubbock, Texas, last season was a fantastic experience. I never dreamed 5,000 people could be so loud.”

The best thing about Tyler is that if he never hits another home run, never hears the cheers again, he’ll still be just fine.

He loves the game and he’s going to be one heck of a coach.