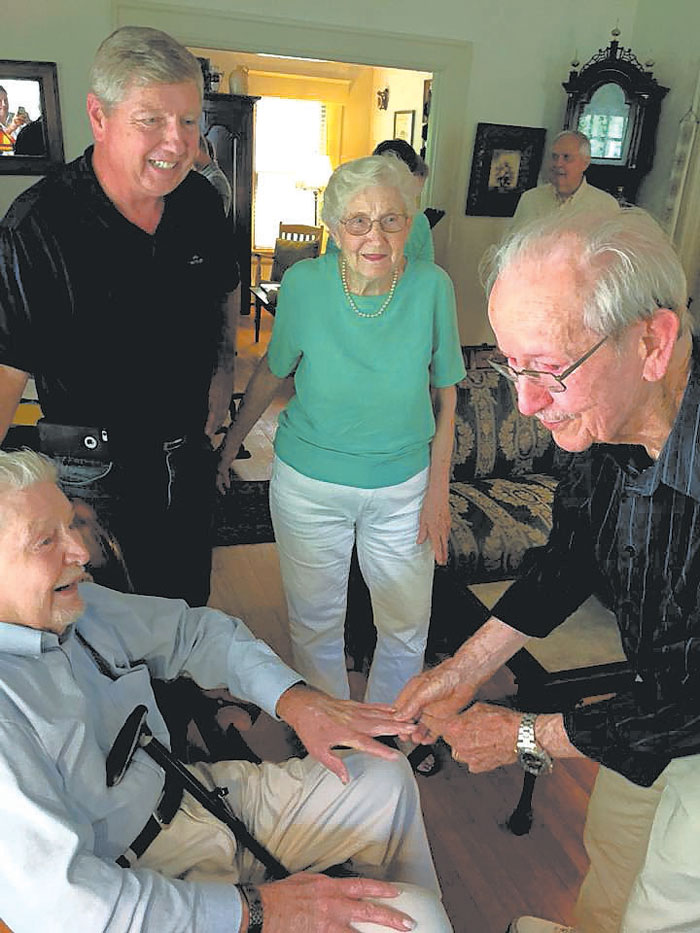 Nearly 70 family members and friends from across the nation gathered Saturday at James Stirewalt’s Salisbury residence to celebrate his 90th birthday.

Over his ministerial career, Stirewalt has served many Lutheran congregations in the North Carolina and Virginia synods.

The guests Saturday also recognized his participation at synodical and national Lutheran gatherings; his leadership in forming the Rowan Cooperative Christian Ministry (now Rowan Helping Ministries); his support of the Fulton Heights subdivision; and his affiliation with the Rowan Museum, Historic Salisbury Foundation and South Rowan Historical Society.

An Army corporal serving in postwar Germany, he attended one of the Nazi war crime trials and assisted in establishing radio stations in Germany’s devastated cities.

Stirewalt is a classic car and model train enthusiast. He is a former member of the Chrysler Club and supports the N.C. Transportation Museum. He sold his once-burgeoning Lionel train collection to a close friend, former Catawba College President Fred Corriher.

During Saturday’s drop-in, guests acknowledged Stirewalt’s life as a native of China Grove.

Stirewalt is the son of the late Murrell and Ruby Blackwelder Stirewalt, and he was raised on Stirewalt Road. He spent his youth working on the family farm, as an employee at China Grove Mill and as a janitor at China Grove High School.

Growing up, he belonged to Mount Moriah Lutheran Church.

After his tour in Germany with the U.S. occupation forces, Stirewalt returned home to attend Catawba College. He toured the United States with the Catawba Men’s Choral Octet and, in 1951, earned a bachelor’s degree in history.

The couple shared a mutual love of performing arts, antiques, gardening, travel and North Carolina history. Their appreciation for many musical genres highlighted their marriage.

Family members and friends attested to Stirewalt’s deep connection to his family homestead, ancestry and the soil. His love of the land inspired Stirewalt to serve multiple elected terms on the Rowan County Soil and Conservation Board.

Stirewalt’s ministry was marked by his dedication to ecumenical relations and a commitment to understanding among ethnic communities. Today, Stirewalt is an active member of Haven Lutheran Church in Salisbury and has deep ties with Rowan County’s Lutheran congregations.

Among several gifts Saturday, Stirewalt was presented with a U.S. flag. that was flown over the U.S. Capitol in his honor.