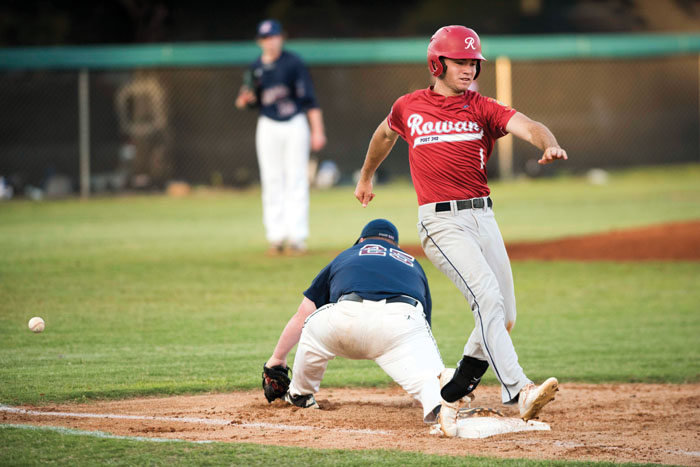 KANNAPOLIS — At least it was worth the wait.

Rowan County’s American Legion season-opener took four hours and 16 minutes to complete Friday night — and wasn’t decided until Post 342 scored three times in the top of the ninth inning to win, 16-14, at Kannapolis.

“I was proud of the ways the boys battled back tonight,” said Graham. “Some of our pitching wasn’t on, but that will come. Stamper did a good job settling things down, but we haven’t played nor practiced for a while due to the weather. I know these guys have played high school baseball, but they’ve had long layoffs and it has an effect on a pitcher’s ability to locate his pitches.

“It was a good test for the six pitchers,” continued Graham. “We’ll run them back out there in a couple of days … they can only improve from here, and we’re going to need those guys down the road.”

The victory went to right-hander Brett Graham, who held Kannapolis scoreless over the last 2 1/3 innings. He struck out four, walked two and did not allow a hit.

Rowan’s last charge up the hill began in the top of the eighth when Pearce Wilhelm lined a one-out single into left field. Teammates Bryson Wagner and Griffin Myers drew walks to load the bases and chase southpaw Ryan O’Kelly. Facing right-handed reliever Nick Pepper, Rowan’s Chandler Lippard coaxed another walk to trim the deficit to two before Graham was walked to make it 14-13 with an inning to play.

Graham deftly eased out of a tight spot in the Kannapolis eighth when he fanned Jackson Aldridge and Lane Argabright with two runners on base.

Facing Rubinstein in the top of the ninth, Brycen Holshouser drew a leadoff walk and stole second. Lee Poteat (three run-scoring doubles) — last season’s Area III Player of the Year — reached base for the fifth time when he was hit by a pitch. Wagner followed with a terrific plate appearance, paddling a run-scoring hit into center field on a 3-2 pitch. Rowan went ahead when Myers slashed a base hit to right-center and an insurance run crossed on Lippard’s ground-ball single to left.

Post 115 jumped on White, the left-hander out of North Rowan High School, for six runs in the first inning. The hosts opened with five consecutive singles, including RBI-hits by Joe Tolone and Furr. Rowan’s Olen Stamper relieved and yielded Sammy Stapp’s two-out double to right, but later smoothed the edges. His night ended after pitching four innings of relief and allowing three hits and one earned run. He struck out five and walked none.

Rowan left the bases loaded in the second, third, fourth and eighth innings — and still scored seven runs. Poteat scored three times and was robbed of an extra-base hit when Kannapolis center-fielder Seth Cauble made a diving catch on his bases-loaded line drive to close the top of the second.

Leadoff batter Chandler Blackwelder opened the game with a sharp, ground-ball double into the left-field corner and scored Rowan’s first run on Poteat’s two-bagger to left-center. Blackwelder finished 2-for-7 with three runs scored and two stolen bases. Left-fielder Henderson Lentz struck a leadoff triple to deep center in the fifth inning and scored to put Rowan ahead, 7-6, on Poteat’s double down the left-field line.

NOTES: Rowan head coach Jim Gantt, is at the Division II College World Series in Texas, as part of the DII national coaches’ committee. … Kannapolis fell to 1-1. Although both teams play in the Area III Southern Division, this was not a division game. … The teams conclude a home-and-home series tonight at Newman Park (7:00). Lefty Hayden Setzer is expected to get the start for Rowan on the mound.