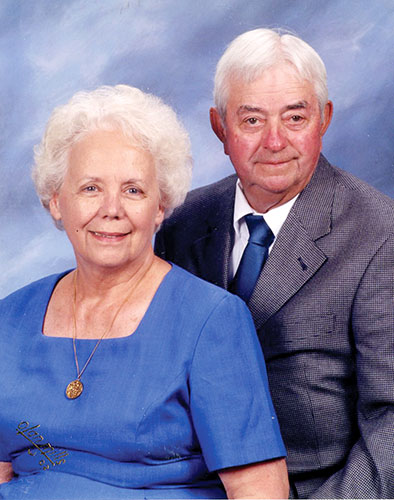 GOLD HILL — Born in 1928, John Yelton has been in Gold Hill all his life except for a three-year stint in the military.

Just like a book he read about Jimmy Carter’s life in Plains, Georgia, Yelton says he has been on plenty of washboard roads and he always tries to be nice to people.

Yelton and his wife, Patricia, live in her grandparents’ house that is at least 100 years old at St. Stephen’s Church and Old Beatty Ford roads. From their vantage point, they have seen lots of change over the years, which Yelton recalls with just a hint of a grin.

Yelton’s father, O.F. Yelton, was the first mail carrier in town beginning in 1918 and also served as Gold Hill’s last mayor. Mary Goodman was the postmaster.

“Miss Mary let me lick the 3-cent stamps,” Yelton says. “That was a treat. I got to ride with Daddy on the mail route, and we knew everybody. There were only two houses that had telephones, and the last one was about 10 minutes from the end of the route. They would call home so Mom would know when to put the biscuits in the oven for supper.”

His childhood, which seemed normal at the time, seems quite unusual now. Yelton went to first through fourth grade in Rockwell in a building with outdoor toilets before moving into a new school for fifth grade. The kids rode Bus No. 24 from Gold Hill to Rockwell, one that Yelton later drove in the 10th and 11th grades.

From ages 10 to 13, Yelton worked for $3 a week cultivating corn, hauling hay and feeding cattle.

“That was a lot of money,” he says. “I could buy a drink and a pack of crackers for 10 cents, just the same as the cost for a hamburger.”

The boys played baseball against teams including Liberty and Rimertown on a ballfield that no longer exists. They also joined a Boy Scout troop. All of those other boys are deceased now.

A historical town sign says there were once as many as 25 saloons in Gold Hill.

“I don’t believe it, but there were six general stores,” Yelton says. “They were owned by Will Martin, Earl Honeycutt, Charles Helderman, Guy Russell, Richard Leonard and Dora Atkins. I used to barter eggs at Mr. Honeycutt’s store. He was a fine man.”

A big hotel remained in Gold Hill during Yelton’s childhood.

“It was really nice,” he said. “Someone bought the land and tore the hotel down. The land became part of the cemetery. The current Montgomery’s Store was a chicken house and was filled with old junk when Hurricane Hugo nearly blew it down. Mauney’s Store, now filled with antiques and collectibles, was the place to get your ground cow feed in the 1930s and ’40s. Plus, there was a murder in town involving two locals when one hit the other in the head with a stick. Only another person or two in town will know about this.”

After starting at Pfeiffer College in the fall of 1945, Yelton joined the Army in February 1946. He served for three years and smiles when remembering his service,

“I drove a staff car for a major and all his Italian girlfriends. We went everywhere, including Paris. but Italy was torn apart. The Seabees had to cut apart the sunken ships to get the ports going again. I had also had my first experience with communism and didn’t like being around it.”

Next came marriage to Pat in 1948 while Yelton was still in service. Yelton remembers that Postmaster Goodman brought his letters to Pat’s home after work. Later, Pat served as the Gold Hill postmaster for 15 years. “She was once honored as district postmaster of the year,” he says. “Her books always balanced.”

Life kicked into high gear as Yelton went to work in 1960 for Claude Hayes, who came to town with an interest in reopening the mines. He spent a year dewatering and cleaning up the Randolph shaft that was 600 feet deep with plenty of cross cuts. Hayes lost his life in a fire after samples were sent in, but the mines remained silent.

The Gold Fields Mining Co. leased all the mining sites in 1980, and Yelton joined them too. At least 4,000 sample holes were drilled with gold found in all of them, he says, but the volume of gold was not significant enough to open the mines.

Yelton became interested in working to restore historical Gold Hill and led a fundraising campaign that financed Gold Hill Park and the Russell-Rufty shelter in the early 1990s.

“I was ahead of the rest in thinking what to do. Eventually, Darius Hedrick and I worked together to restore and move most of the buildings that are here now. My favorite events are the oyster roast in April and Founders Day in September.”

Soon to turn 90, Yelton farms nearly every day, raising produce for his own store that is within sight of his house.

“I still get to do about what I want in this nice little quiet place. If I had kept a diary, I would have had a good book.”

And he still gets those biscuits just about every day.