Kuechly says he won’t change style of play after concussion 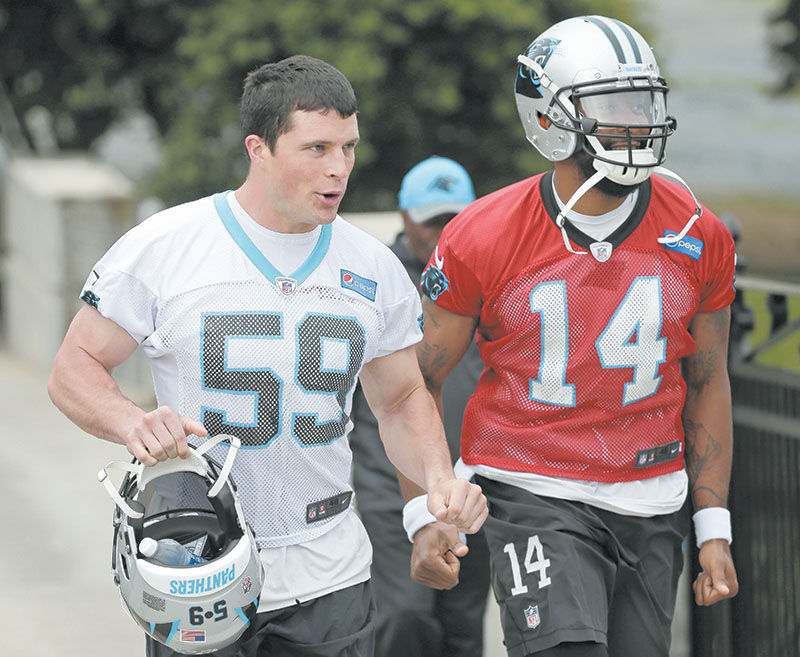 CHARLOTTE (AP) — Panthers linebacker Luke Kuechly has no plans to alter his aggressive style of play following a second concussion last November, one that tugged at the emotions of a national TV audience when he was carted off the field sobbing uncontrollably.

The 2014 NFL Defensive Player of the Year still doesn’t like talking about that frightening Thursday night game, and is clearly itching to put concussion talk behind him and prove to doubters he’ll be just fine this coming season.

He said it’s time to move on.

“You don’t play the game and think about getting hurt because that slows you down and increases the likelihood of getting hurt,” Kuechly said Thursday as sweat dripped from his brow following a morning OTA practice session. “You just go out there and play.”

Kuechly, 26, spent three weeks in the NFL’s concussion protocol last year following a collision with Saints running back Tim Hightower. Hightower’s helmet hit Kuechly’s facemask and chest a split-second before teammate Thomas Davis collided with Kuechly’s head from behind, leaving the three-time All-Pro gasping for breath and the soldout crowd in silence.

After Kuechly was helped on to a cart, almost every player on both sidelines came up to wish him well. Kuechly seemed oblivious to it all, the tears streaming down his cheek as he stared ahead blankly. To those watching on TV, it was a close-up reminder of the violent nature of the sport and the mystery that still surrounds concussions.

Even after being cleared by independent doctors, Panthers coach Ron Rivera decided to keep Kuechly out for the final three games of the season.

Kuechly strongly disagreed with Rivera’s decision at the time, but there was little he could do.

Rivera said if the Panthers had been in playoff contention he might have considered allowing his defensive leader to play. But with Carolina running out of bodies and heading toward a 6-10 finish, he played it conservative.

“There’s some medical science that says even though a guy is cleared the longer you wait sometimes the better,” Rivera said Thursday. “All I did was follow what the doctors were telling me, and make a decision I thought was best for the young man and the team going forward.”

But Kalil said he has the utmost respect for the Panthers medical staff, a group headed by longtime NFL head athletic trainer Ryan Vermillion.

Kalil said the culture in Carolina has always been putting the welfare of the player first, something he has seen time and time again during his 10 seasons with the Panthers.

“I don’t know how it is around the rest of the league but this is a group that sincerely cares about the health of its athletes,” Kalil said. “This perception is it’s about trying to rush players out there. But that’s not the case because it’s not beneficial to the team. The quicker you rush a guy out, the more susceptible he is (to suffer another concussion). So it is in the best interest of the individual and the team that that guy is healed first. The best way do that is to rest.”

Oher hasn’t been pushed to get back on the field.

Oher did not participate in OTAs this week and Rivera said Thursday and wouldn’t say when he expects him back on the field. The Panthers drafted offensive tackle Taylor Moton in the second round out of Western Michigan as an insurance policy.

For Kuechly, it is back to business as usual.

The Panthers aren’t in pads yet, but he’s running around with his teammates and making plays like he always has. When it comes time for real games, Kuechly said little will change in his approach to tackling ball carriers or sacking quarterbacks.

“I have never been a big lead-with-my-head tackle guy,” Kuechly said. “I just try to get them how I can get them and get them on the ground.”