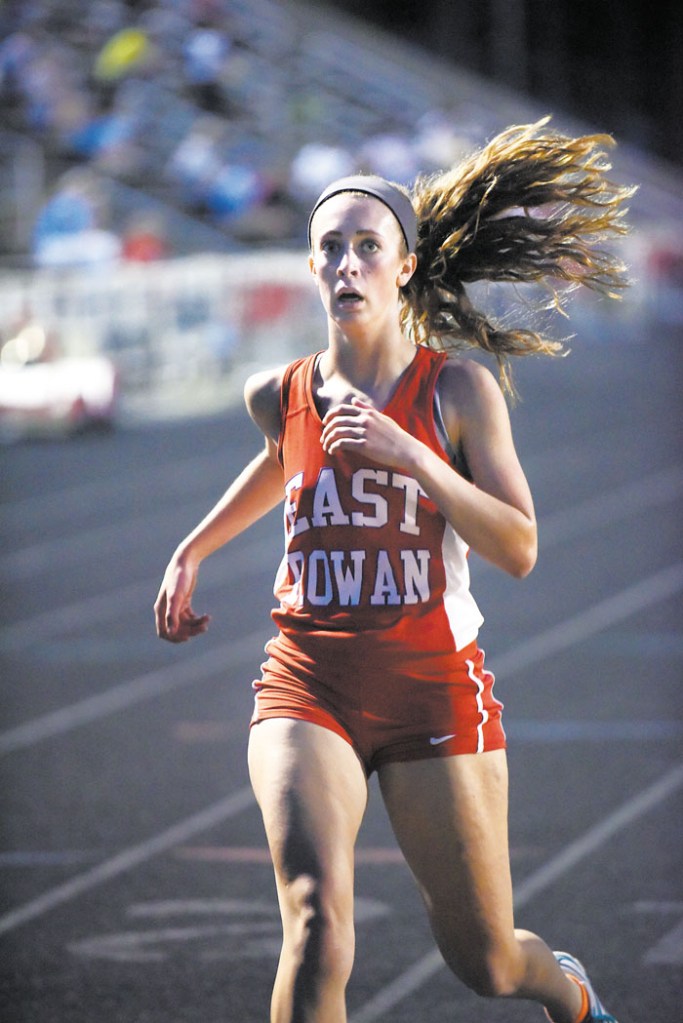 GRANITE QUARRY  —East Rowan’s Faith Faller lost her senior cross country season to a lower leg stress fracture,  but she more than made up for it in track and field with county championships in three events.

She has signed with NCAA Division II Lenoir-Rhyne University, the Hickory school where her father,  Gene, played soccer before transferring to East Carolina, and the school from which her mother, Ann, graduated.

With Heglar moving on, Faller was expected to rule Rowan girls cross country as a senior, but her season never happened. What Faller hoped was a minor setback early in the season was actually a serious injury, essentially a broken foot, and she spent the fall limping in a walking boot.

It said a lot about Faller that she didn’t just sit in her room, watch TV, sulk and mope about what might have been.

When East had a meet, she was there, supporting her younger sister, Grace, and the rest of her teammates.

“I’d been so excited for my senior cross country season, so it was disappointing,” Faller said. “We talked about me trying to come back late in the season, but it wouldn’t have been worth the risk. The smartest thing to do was just to rest and try to get healthy. But I stuck around at all the meets. I was still part of the team. I handed out towels, passed out water, whatever I could do to help.”

Swimming season followed cross country. Faller placed fifth in the Rowan County Championships in the 50 freestyle and was a huge part of East’s relay success. More important, swimming played a vital fitness role in getting her back to  health on the track.

“People kept telling me there was a plan for me and there’s a reason things happen,” Faller said. “I wanted to believe that. I was going to put everything I had into the track season.”

Weather played havoc with the track season, canceling a number of meets, but the sun came out for the Rowan County Championships in mid-April. That’s the event Faller had circled on the calendar for months, and that’s when she returned to the county spotlight as a runner.

“I had something to prove, to prove to myself mostly,” Faller said. “I was just really ready for that meet, and it’s a great feeling when you go out and do what you wanted to do. I had to take a few days off after the meet — I was hurting a little bit — but it was definitely worth it.”

Faller had taken the 3200 meters in both the Rowan County Championships and South Piedmont Conference Championships as a junior, so she knew exactly how good winning was supposed to feel.

Faller reached qualifying times for the 3A Midwest Regional in all three of her events, but she chose to focus on her best race, the 3200. She needed a top-four finish to advance to state competition, but she placed seventh in 12:07. That was her final school race. But she went out the way every runner wants to go out — with a PR.

Jon Heidrick coaches East cross country, swimming and track, so he witnessed all of Faller’s comeback, from the darkest days to the brightest.

“She’s been a great athlete to work with,” Heidrick said. “She listened intently for any information that would improve her running. She was self-motivated and always went above and beyond any training that the other athletes were doing. When everyone else was ready for practice to be over, Faith was that girl saying. ‘What else can we do?'”

Faller made an official visit to Lenoir-Rhyne back in the fall. Coach Jason Stewart kept track of her progress all year and was delighted with all she was able to accomplish during the track season.

“When I went up to Lenoir-Rhyne, they treated me like family and it reminded me so much of our cross country team at East,” Faller said. “It’s going to be exciting competing in college, just being healthy and seeing what I can do.”

Faller’s father works for Food Lion, while her mother is a Spanish teacher at South Rowan.

She hopes to follow both of them by majoring in international business — with a minor in Spanish.