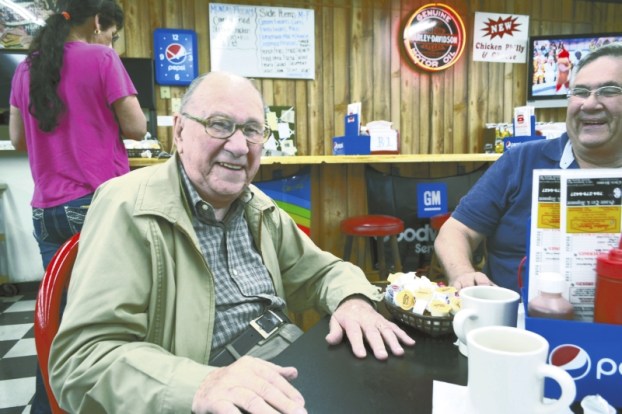 Despite losing his beloved wife in March and having heart surgery in April, Wallas Hylton still finds a lot to smile about. Susan Shinn Turner/for the Salisbury Post

• “That was the worst ride of my life. Golly, that was awful, and they charged me $1,000.” — Wallas Hylton, 97, on an ambulance ride to the ER, an incident that led
to him becoming the oldest patient at  Presbyterian Hospital in Charlotte to have a  new procedure to replace a blocked heart valve

• “They charged you by the bump.” — Andy Hylton, on hearing his grandfather’s quip above

• “If a student doesn’t do the work, don’t be afraid to fail the student. In high school, no child is left
behind; in college, some are left behind.” — Paul Baker, who is retiring after 36 years as a mathematics and computer science professor at Catawba College, when asked his departing advice to faculty

• “The rest of us were playing for second place.” — Andre Resner, a Salisbury golfer playing in the final round of the N.C. Senior Amateur Championship, after Paul Simson of Raleigh won the tournament for the third straight year

• “Let’s face it, it’s going to be ‘GQ’ no matter what we do.” — Mike Brinkley, mayor pro tem of Granite Quarry, during a discussion of the design for a new town logo at a Board of Aldermen meeting this week

• “I’m sorry. You’re going to have to be quiet. I tell you what we’re gonna do. I’m gonna answer the questions, and you’re gonna ask them in order. … I’m not going to be a target for you.” — State Rep. Harry Warren, when he was interrupted by an audience member at a town hall meeting he hosted Thursday night in Salisbury

• “It’s a simple thing, prayer. We don’t realize the power of prayer.” — The Rev. Michael Taylor, chaplain of the Rowan County Sheriff’s Office, who is coordinating the 22nd annual Shield-a-Badge With Prayer program that recruits volunteers to pray for law officers

Cokie and Steven V. Roberts: Critics of the world, unite!