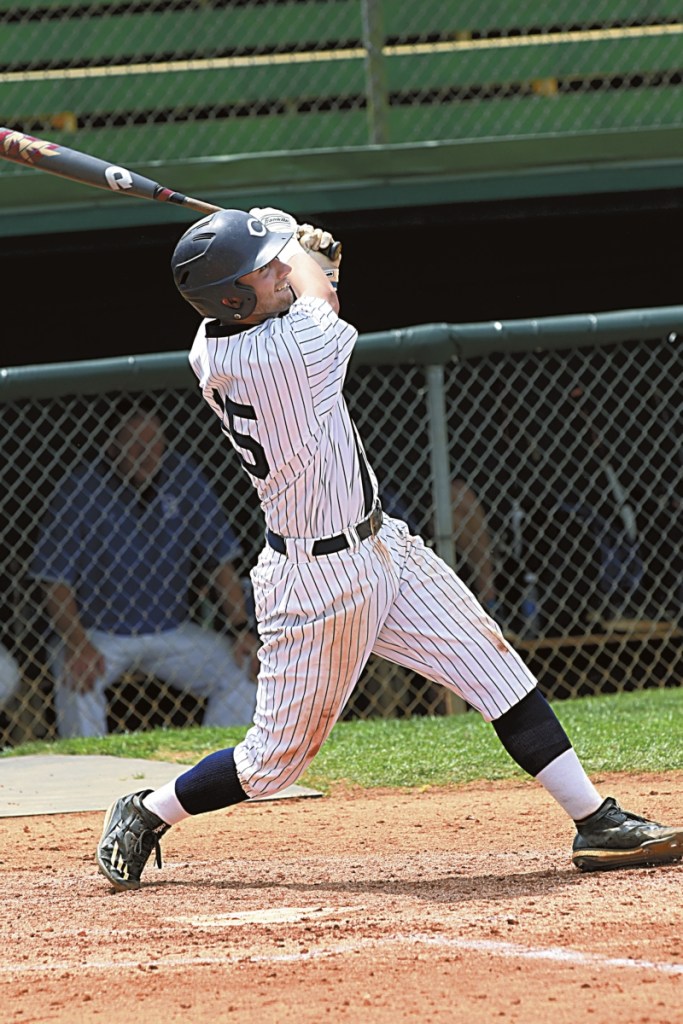 Wayne Hinshaw file photo/for the Salisbury Post ... Catawba’s Chance Bowden, shown smacking a home run in an earlier game this season against Brevard at Newman Park, hit a homer and two doubles on Saturday as the Indians eliminated USC Aiken, 7-4, in the NCAA II Southeast Regional Tournament at Mount Olive.

MOUNT OLIVE — Catawba junior Chance Bowden stayed on a tough slider and ripped it down the left-field line for a run-scoring double in Saturday’s 7-4 NCAA Division II Southeast Regional win against USC Aiken.

Catawba remained alive in the double-elimination tournament and is one of four teams remaining in the five-day, seven-team event. Catawba faces South Atlantic Conference rival Lincoln Memorial in an elimination game today at noon at Mount Olive’s Scarborough Field and would play again at 3:30 if it beats the Railsplitters of LMU.

Bowden has produced almost a daily double for the Indians in his three seasons, and he whacked two more on Saturday, finishing the day with 20 for the year and 64 for his career. Catawba’s school record for doubles, Blair Reynolds’ 69 from 2000-03, figures to be shattered by Bowden, who pounded a Catawba season record of 31 doubles as a sophomore.

Prior to his run-scoring double in the third, Bowden, a former Salisbury High and Rowan County Legion star,  had an even bigger swing in the second inning with Kyle Smith on base. That one turned the game around.

“Aiken put up two runs in the first inning on us, but we didn’t panic,” Bowden said. “It was an elimination game, but we stayed relaxed, knowing there was a long way to go. In the second inning, I got a fastball inner half on a 1-and-1 count and put a good swing on it. That two-run homer (it was crushed to left-center) made it a new ballgame.”

Before the second inning was over, Catawba led, 4-2. Nick Coble walked and moved around the bases on a sacrifice, groundout and passed ball for the go-ahead run. Malachi Hanes walked and scored on a hit through the left side by former East Rowan standout Luke Setzer.

The hit extended Setzer’s hitting streak to 22 games. The school record for hitting streaks is held by another former East Rowan player, Craige Lyerly, who hit safely in 39 straight games in 2009-10.

After Bowden’s RBI double down the line made it 5-2 in the third, USC Aiken (40-15) rallied against Catawba’s undefeated starter Hunter Shepherd for two runs in the fifth to get within 5-4.

But Catawba’s bullpen came through.

Clay Young got the Indians out of the fifth with the lead. Winning pitcher Connor Johnson (8-2), another former East Rowan product, put up zeroes in the sixth and seventh. Setzer threw out a runner at home from right field in the sixth inning to help preserve the lead.

“Great job by Connor today and by all the guys that pitched out of the bullpen,” Bowden said. “They gave us a chance.”

Johnson got the first out in the eighth inning before all-region closer Bryan Blanton came in to get the last five outs, three on strikeouts. Blanton has 13 saves this season and 24 for his career.

Catawba tacked on single runs in the sixth on a sacrifice fly by Hanes and in the eighth when Bryce Fowler’s ground ball got Bowden home, following his second double.

“After we put up those four runs in the second inning, we didn’t settle, and that was good to see,” Bowden said. “We kept having good at-bats, kept grinding, and we got some big insurance runs.”

By staying alive, Catawba (38-16) halted a four-game losing streak that began in the SAC Tournament.