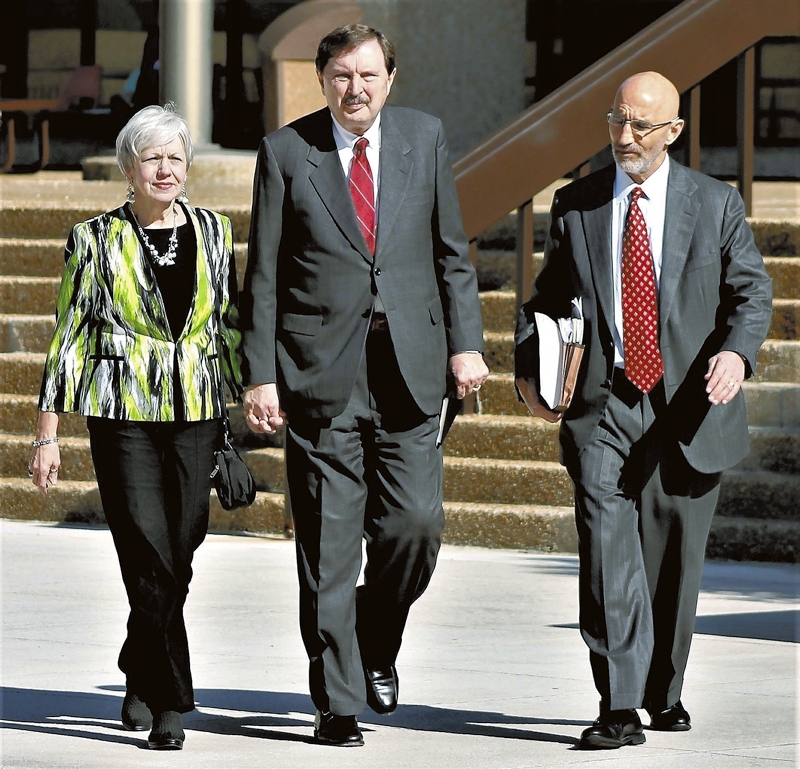 Former North Carolina state Sen. Fletcher Hartsell, flanked by his wife, Tana, and defense attorney Rock Glaser, are shown leaving the federal courthouse on Tuesday, May 16, 2017. Hartsell was sentenced to eight months in prison for misusing more than $200,000 in campaign funds for personal use. (AP Photo/Skip Foreman)

WINSTON-SALEM — Former state Sen. Fletcher Hartsell of Concord, accused of misusing more than $200,000 in campaign funds on vacations, speeding tickets, haircuts and other items, was sentenced Tuesday to eight months in prison after pleading guilty to three charges in the case.

Hartsell was sentenced at the end of hearing that lasted more than an hour in a federal courtroom in Winston-Salem. Much of the hearing focused on arguments made on behalf of the 70-year-old Hartsell about how much time he would serve behind bars.

Hartsell faced a maximum sentence of 20 years, but defense attorney Rick Glaser cited Hartsell’s record of service to the community as he argued for probation. He began by asking family members and supporters of Hartsell to stand. About a dozen family members, including his wife and about 30 other supporters, stood.

Glaser made references to Hartsell’s various mission trips, six of which were to Guatemala, and his work to save jobs at the former Pillowtex plant. That service shouldn’t make a difference, Assistant U.S. Attorney Joanna McFadden said.

Probation, McFadden said, “does not promote respect for the law.”

“The sentence should deter others who consider committing these crimes,” she said.

Judge Thomas D. Schroeder then gave Hartsell a chance to speak. Dressed on a charcoal gray suit with a red tie, Hartsell stood between his defense team and said, “I acknowledge my responsibility for the action taken.”

“I simply accept this,” he said before sitting down.

Before pronouncing the sentence, Schroeder chided Hartsell for what he called “10 years of offensive conduct.”

After the sentence was handed down, Hartsell’s wife, Tana, hugged well-wishers as they exited the courtroom. Shortly afterward, she and her husband held a long embrace between the defense and prosecution tables. Minutes later, they left the courthouse holding hands. They declined to answer questions from reporters.

Hartsell pleaded guilty in February to two tax-related counts and one count of mail fraud. As part of a plea agreement, more than 20 other counts arising from indictments last year are to be dismissed.

A document filed by prosecutors intended to lay out the plea arrangement said Hartsell used about $210,000 from his campaign committee between 2007 and 2015 “to pay for personal goods and services for his own enrichment,” including vacations and theater tickets. A 2006 state law limits the use of campaign funds essentially to expenses tied to running for or holding public office — and to charity.

According to the U.S. Attorney’s Office filing related to the plea, Hartsell told a state elections investigator that haircuts were a proper campaign expense because he wouldn’t get his hair cut were he not a legislator, while tickets to the theater performance “Jersey Boys” constituted “therapy” for him.

The State Board of Elections began investigating Hartsell’s campaign expenses in early 2013, leading to a federal probe. When converting campaign funds to personal use, Hartsell failed to report the money as income on his federal tax returns, the prosecutors wrote.