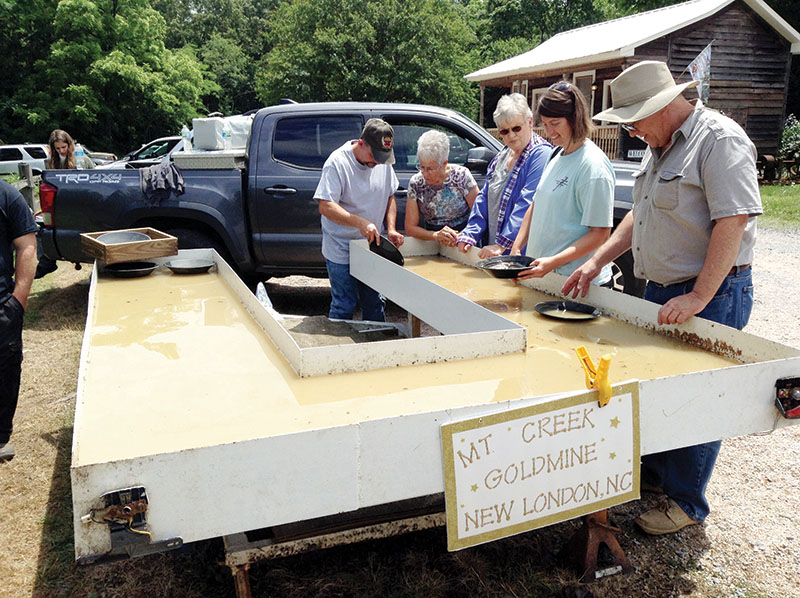 A visit to historic Gold Hill is like stepping back in time but a visit offers much more than that. Sandy Hickman spent years as a high school Latin teacher heading toward burnout. She and her husband found a house in Gold Hill, and along with it, came a small shop. Sandy said, “Go the path where opportunity leads you. I’ve been here seven years and feel like I’m back home, which just happens to be the name of my shop. I grew up spending lots of summers with my grandmother in Mt. Pleasant. Nostalgia is a powerful force.” Sandy, whose shop sells home décor, antiques, florals and gifts, organized and promoted Gold Rush Days with the help of the other nine village merchants. Gold panning, bluegrass music and plenty of craft vendors added to the usual village choices for Gold Rush Days.

All of the shops are open on Saturdays and most are open on Sundays. A few have Thursday and Friday hours as well. By noon, parking was at a premium in the restored 1850s village as the shops did a brisk business.

Lindsay and Henry Pless kept the oven hot producing popular baked goods at Bakery, Baskets and Gifts. Lindsay said, “What we bake is with the traditional ingredients of butter, milk, flour, eggs and cheese that my grandmother would have used, so it’s reminiscent of another era. So is this 1840s miner’s cabin that was moved from a half mile down the street. It’s been a bakery three times and I’ve been here seven years.” Husband Henry, a computer programmer and farmer, was busy helping just like he does on most Saturdays. Lindsay added, “When people get here, they don’t have to hurry and leave. You have to love what I do but I get to meet so many great customers.”

Local artist Myrtis Trexler stopped in to get coffee, some conversation and a few sweet treats. Myrtis does jewelry, painting and embroidery. She said, “I played around the mines when nobody but the locals knew about the place. I’ve been here all my life. These are my tromping grounds.”

Just across the street is River Pines Pottery and owner Lennie Cooper, also the EMS chief for Rowan County. Cooper said, “I just feel like I fit in here. I have had an interest in pottery since my early 20s and bought a kiln and wheel ten years ago. I sell the stuff for enough to keep me in supplies to keep making more. What I do here is such a departure from my real work but I look forward to coming in here to make pottery every Saturday.” Lennie and his wife operated two businesses in a very small cabin at Gold Hill until they got separate places. Both support customer appreciation days on the first Friday evening of every month that includes free hotdogs, desserts and music by Moving on Bluegrass that will continue all summer.

Lennie’s wife, Ann, has her own store called River Pines at The Feelin’ Station Artisan Studio. She enjoys her time in the store because it’s fun and the people who come in are so interesting. Ann said, “I have had customers from everywhere, even as far away as Australia. They come here looking for something unique, often just strolling as they go around the town.” River Pines is open on weekends and by appointment and offers handcrafted ceramics and other artware. Diane Fisher Hill, a resident of Gold Hill, had stopped in and said, “I love the stores in Gold Hill. There is a good mixture of a lot of styles and a great place to find last-minute gifts.”

All the shop owners give credit to Darius Hedrick, the Gold Hill visionary and owner of Mauney’s Store. Hedrick arrived in Gold Hill in 1989 to clean up his dad’s home and eventually restored it. Next came Mauney’s General Store next door, known for its collectibles and antiques. Hedrick looked at the house and store and thought of how Gold Hill had been thriving 150 years ago. Darius said, “A group of good people came together and the idea began to snowball. There was no real planning or forecasting. There are now 12 buildings, four of them original, in the historical village.”

Hedrick tells the story of a building that he spotted while on a bike ride. He said, “I first saw it with a cow standing on the porch but I knew it would fit right here. I found out who owned it and called but was told that the building was not for sale. Then a year later, the owner called back and gave me the building. We took the chimney down, moved it all here and set it back up.”

“What I have done here is my contribution back to the planet. There is just something about this ground. When you get here, you just don’t want to leave.”

For a complete list of Gold Hill events, check www.goldhill.com