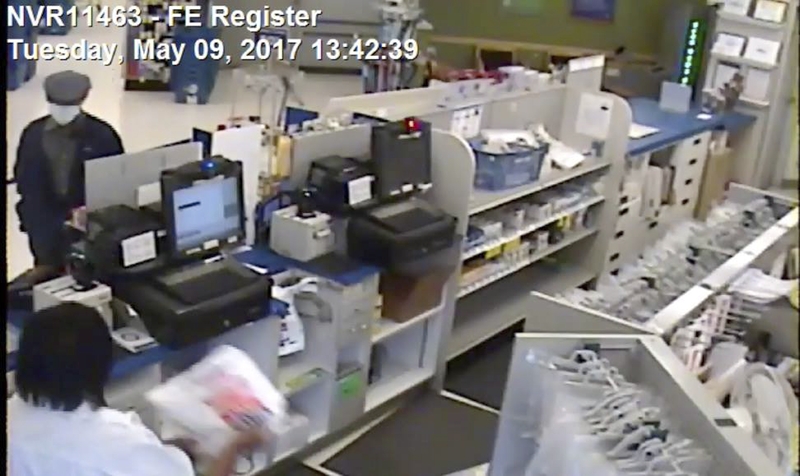 Salisbury Police are looking for this man who robbed the Rite Aid pharmacy and took off with oxycodone pills. The man, who is believed to be Asian, was wearing a surgical mask, a paperboy hat and dark clothing. Submitted photo

SALISBURY — Police are searching for a man who wore a mask while robbing a Rite Aid pharmacy and taking a number of oxycodone pills.

The man threatened the pharmacist and slid her a note, police said.

The robbery occurred at 1:48 p.m. Tuesday at the store, 640 W. Jake Alexander Blvd. The robber did not show a gun, but the pharmacist believed he had one.

Police say the man walked to the pharmacy counter with a hospital-type mask covering the bottom part of his face. He slid a note across the counter that asked for oxycodone.

He told the pharmacist that he knew who she was and where she lived and began threatening her. The suspect warned the woman not to push an alarm button. She placed an unknown number of pills into a shopping bag, and he left.

The man was seen driving a Lexus sport utility vehicle that was either champagne colored, gold or silver, a police report said. The vehicle was described as a 2010 or 2011 model.

The man is believed to be Asian and about 5 foot 6 inches tall to 5 foot 8 inches tall. He was wearing a paperboy hat, dark jacket that may have been a windbreaker, dark pants and black shoes.