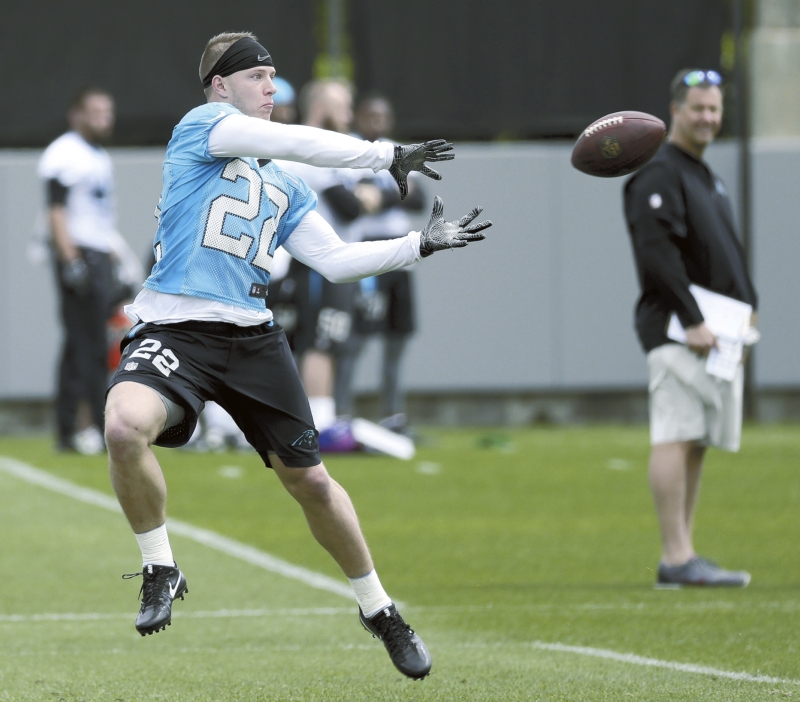 Christian McCaffrey is trying to put all the injuries that slowed him last year — a high ankle sprain, separated shoulder and thigh problems — in the rear view mirror.(AP File Photo/Chuck Burton)

CHARLOTTE (AP) — Christian McCaffrey was only 4 years old when his father retired from the NFL following a distinguished 13-year professional career as a wide receiver.

But although he doesn’t remember Ed McCaffrey winning three Super Bowls — one with the 49ers and two with the Broncos —  the Panthers’ rookie said having a father playing in the league will make his own transition to the NFL that much easier.

“It’s a huge advantage getting to pick his brain all of the time,” McCaffrey said. “He has been through the good, the bad and the ugly. My family is really, really close and I love him.”

McCaffrey took the field for his first NFL practice Friday, about 12 hours after signing his rookie contract with the Panthers, who selected him No. 8 overall. McCaffrey wasted little time showing the athleticism that allowed him to break Barry Sanders’ NCAA record for all-purpose yards in a season.

He zipped through the line of scrimmage and caught passes over the middle in a smooth, fluid motion before turning quickly up the field. His cuts were sharp and precise. Granted, there was no defense and players wore shorts instead of pads and helmets, but McCaffrey’s speed instantly stood out.

The Panthers plan to use him as a multi-purpose threat coming out of the backfield, in the slot and on punt returns, all the while taking pressure of quarterback Cam Newton and potentially creating mismatches for opposing defenses.

While 5-foot-10, 202-pound McCaffrey didn’t inherit his father’s height — he is seven inches shorter than his 6-foot-5 father— he did get his dad’s football playmaking ability and his mother’s speed. Lisa McCarthy was a soccer player at Stanford and her father, Dave Sime, was a former sprinter on the 1960 U.S. Olympic team.

Panthers general manager Dave Gettleman spent time with Ed McCaffrey in Denver and describes him as a true pro.

“The acorn didn’t fall far from the tree,” Gettleman said. “Christian has got a great family background. He’s been around the NFL his whole life. He just gets it. He understands it. That right there is huge.”

Panthers coach Ron Rivera said along with McCaffrey’s athleticism, he has all of the intangibles to be a great player.

Panthers wide receivers coach Lance Taylor, who coached McCaffrey at Stanford, said told Rivera that McCaffrey has “Luke Kuechly’s DNA.” In Carolina, that’s about as big of a compliment as you can had out given how well respected the hard-nosed, intense two-time All-Pro linebacker is around here.

“Once you get to sit down and talk to him, once you get to ask him questions and listen to his answers and then some of the things that he just says, you just get a sense that this man does get it and does understand what it takes,” Rivera said.

The 20-year-old McCaffrey sounded like a pro when speaking with the media following his first practice, saying all the right things.

Maybe it was natural — or maybe it was just growing up around his father.

“It was a blast,” McCaffrey said of his first day. “This was a big learning day. And once you learn it, earn it. That’s the biggest thing is getting the plays down and once you come out here (to the field) making sure there are no questions.”

McCaffrey is trying to cram in as much on-field knowledge in as he can to be ready for the season.

Because Stanford operates on the quarter grading system, McCaffrey isn’t allowed to rejoin the Panthers after this weekend until early June, according to NCAA rules. That means he will miss most of the team’s offseason practices, something that McCaffrey expects will leave him comping at the bit.

But he is allowed to communicate with coaches and teammates on Skype during that time so he doesn’t fall behind in terminology.

When asked if he’s active on Skype, McCaffrey joked, “I will be now.”