A ‘robust’ Broadway season leads to Tony nominations for 25 shows 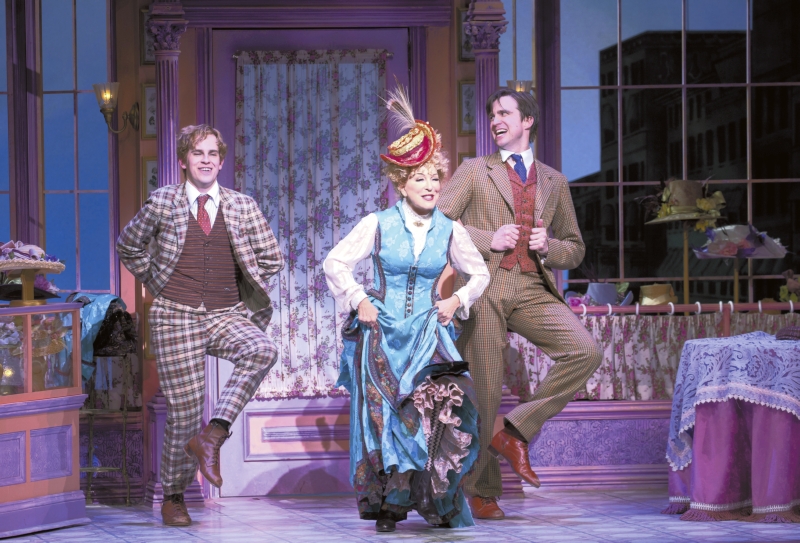 Taylor Trensch, Bette Midler and Gavin Creel perform in the revival of "Hello, Dolly!" in New York. The show was nominated for 10 Tony Awards, including Midler as best actress.

NEW YORK  — A year after falling head-over-heels for a musical about Alexander Hamilton, the Broadway community threw its arms wide open at the 2017 Tony Award nominations, handing out nods to 25 shows in a season notable for its breathtaking range.
“Natasha, Pierre & The Great Comet of 1812,” an improbable pop-opera musical inspired by a Leo Tolstoy novel, got 12 nominations. A revival of the 53-year-old “Hello, Dolly!” about a brassy matchmaker earned 10. “Dear Evan Hansen,” a heartfelt show that begins with a misfit teen’s suicide got nine. Musicals about a pair of cosmetic legends, another set on 9/11 and another based on an old Bill Murray movie were all honored.
“It’s a fantastic season. It’s a deep, great season with people really putting themselves out there — writers and directors and producers and actors. It’s a fantastic year to be a part of,” said Laura Linney, who is starring in “Lillian Hellman’s The Little Foxes” and earned her fourth nomination. “It’s a robust expression of humanity.”
On the new play side, nominations were given to works about working class angst (“Sweat”), Middle East peace negotiations (“Oslo”), a behind-the-scenes look at a controversial 1923 Yiddish play (“Indecent”), and a bold sequel to a Henrik Ibsen play (“A Doll’s House, Part 2”). There were also revivals of plays by giants Tennessee Williams (“The Glass Menagerie”) and Arthur Miller (“The Price”) and a much-cheered Broadway debut by a 65-year-old Pulitzer Prize winner (Paula Vogel).
“I’m just so glad I quit my day job,” joked Vogel, 65, who has taught generations of playwrights at Brown and Yale. “To finally make it here is pretty nice and to be in this company is an honor.”
“Natasha, Pierre & The Great Comet of 1812” will compete for the best new musical Tony with “Come From Away,” ”Dear Evan Hansen” and “Groundhog Day.”
The best play revivals are “August Wilson’s Jitney,” ”Lillian Hellman’s The Little Foxes,” ”Present Laughter” and “Six Degrees of Separation.”
Andy Karl earned his third Tony nomination as the star of the musical “Groundhog Day,” based on the much-loved 1993 movie about a jaded weatherman forced to live the same day over. Karl earned Broadway respect for struggling through opening night with a torn anterior cruciate ligament. “We all get up and we go for it,” he said.
Ben Platt, a star of the “Pitch Perfect” films who recently made Time magazine’s most influential people in the world list, got a nod as the star of “Dear Evan Hansen,” which centers on a profoundly lonely 17-year-old who fabricates a prior friendship with a classmate who committed suicide.
Platt invited his mother to New York to join him in listening to the nominations. “I grew up watching the Tonys — devouring the Tonys each year — so just to be named is a surreal experience,” he said.
Final Tony winners will be determined by some 850 industry insiders. Kevin Spacey will host the awards show June 11 from Radio City Music Hall.
Bette Midler, who stars as the matchmaker in “Hello, Dolly!” will compete with “War Paint” stars Patti LuPone and Christine Ebersole; Denee Benton, of “Natasha, Pierre & The Great Comet of 1812” and Eva Noblezada of “Miss Saigon.”
In a quirk, Midler actually earned her first Tony nomination but has already won one of the trophies — the 1974 Special Tony Award for “for adding luster to the Broadway season” during a concert stand the year before at the Palace Theatre.
Danny DeVito earned a nomination for his Broadway debut in a revival of Arthur Miller’s “The Price,” about an embittered New York City police officer who feels that life has passed him by while he took care of his now-dead father. Asked why it took him so long to get to Broadway, DeVito joked: “Have you seen the size of these Broadway dressing rooms?”
Oscar winner Cate Blanchett also made her Broadway debut in Anton Chekhov’s “The Present.” For the best leading actress trophy, she will face-off against Jennifer Ehle of “Oslo,” Sally Field in “The Glass Menagerie,” Laurie Metcalf in “A Doll’s House, Part 2” and Linney.
Unlike last year when “Hamilton” vacuumed up 16 Tony nominations, this year’s nods were scattered, particularly after a glut of 13 new musicals debuted this season.
Some “Hamilton” alumni struggled a year later. Phillipa Soo saw her show “Amelie” get no nominations, while “Bandstand,” led by director and choreographer Andy Blankenbuehler, didn’t snag a coveted best new musical nod, although he was nominated for choreography.
Other shows completely ignored by the nominators include a revival of “Cats,” the box office hit “A Bronx Tale,” the hit revival of “Sunset Boulevard,” ”Charlie and the Chocolate Factory” and the already-closed “In Transit,” Broadway’s first a cappella musical.
While Broadway veterans like Nathan Lane, David Hyde Pierce, Gavin Creel and Jayne Houdyshell all received nominations, some Hollywood stars were shut out, including Mary-Louise Parker, Allison Janney, Janet McTeer, Liev Schreiber and Mark Ruffalo.
Kevin Kline earned a nomination in Noel Coward’s 1939 farce “Present Laughter,” about an egomaniacal matinee idol. He will compete for the best leading actor with Denis Arndt of “Heisenberg,” Chris Cooper from “A Doll’s House, Part 2,” Corey Hawkins in “Six Degrees of Separation” and Jefferson Mays from “Oslo.”
The Canadian-born “Come From Away” earned seven nominations. It is set in a small Newfoundland town that opened its arms and homes to some 7,000 airline passengers diverted there on 9/11.
The show arrived on Broadway just as a debate over immigration and open borders has reignited following the Trump administration’s push for a ban on travelers from six predominantly Muslim nations.
“This is a reminder that, first of all, we’re all compassionate and that kindness needs practice, like anything else. And we need to get back into the practice of that,” said Jenn Colella, who plays an airline pilot in the show and got a nomination for best featured actress in a musical.
___
Mark Kennedy is at http://twitter.com/KennedyTwits