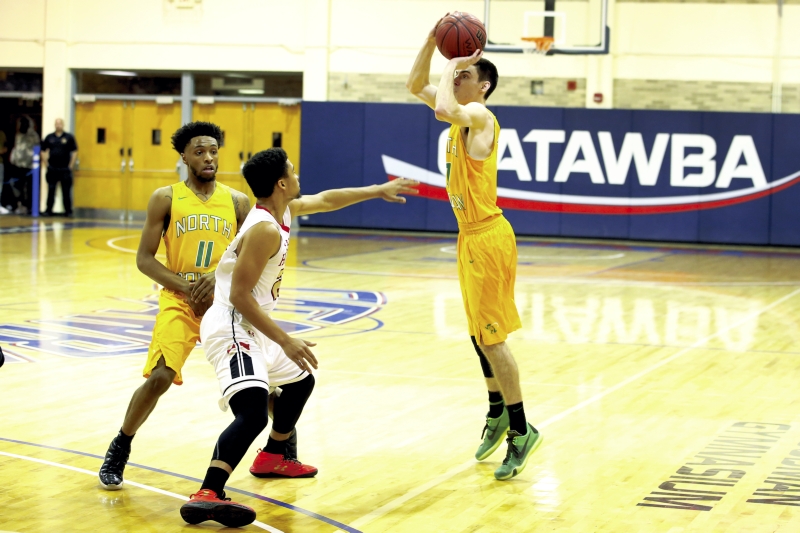 James Sipes file photo/for the Salisbury Post ... North Rowan’s Henderson Lentz, right, fires a jumper against Salisbury during a game played on Jan. 28 at Catawba’s Goodman Gym, as teammate Joe Scott sets a screen. Goodman Gym will now be Lentz’ home for college basketball as he recently signed with the Indians.

SPENCER — A lot of college signings take place in the North Rowan High media center, but this one was unique.

This one didn’t start with a smiling 18-year-old picking up a pen. This one started with a video presentation prepared by the guest of honor —  6-foot-4 Catawba-bound basketball star Henderson Lentz, who is one of the best shooters in county history.

On the video screen, it’s June, 2015,  and North Rowan is participating in Catawba College’s summer team camp. A thinner, 16-year-old version of Lentz pump-fakes at the 3-point line and drives the lane. He draws a foul, knocked to the floor by two defenders, but it doesn’t appear to be an overly violent collision. The whistle blows. Lentz gets up,  knows something isn’t right and heads for the bench. Before he gets there, he topples like a tall tree felled by an axe.

The next two images on the screen are a heart monitor flat-lining and an Automated External Defibrillator.

There was silence in the Catawba gym after Lentz toppled. Shaken teammates, coaches and family members essentially saw him die on the floor. His heart stopped beating. His breathing faded. He turned blue. He was down for 12 minutes, well past the point of hope. Lentz insists he remembers every bit of it. He appeared to be in a coma, but mentally, he was steadily dribbling two basketballs throughout his ordeal. Fortunately, Brenda Paider, a Catawba athletic trainer then, had an AED in her pack. CPR and the electric shock delivered to his heart by the AED revived Lentz.  Suddenly, he sat up, with two IVs in his arms, and asked for his mother.

Next on the screen are bleak images of hospital rooms.  Lentz, with all sort of wires attached to him, looks like a castaway who has been rescued after six months on an uncharted island. He looks painfully weak and emaciated.

“I was hearing that I would never be able to do any sort of strenuous exercise again,” Lentz said. “But I was alive, and either way, I was going to be at peace with whatever happened.”

There were several operations, one to install an Implantable Cardioverter Defibrillator, then surgeries to remove that ICD and to clean up infections. As time passed, doctors concluded there was nothing wrong with Lentz’s heart. He’d been the victim of a freak, near-fatal accident.

Device-free but still thin and under-conditioned, Lentz returned to the gym that December, six months after he went down, and he helped North Rowan win the 2015 Sam Moir Christmas Classic at Catawba. Since that emotional comeback, he hasn’t looked back on the basketball floor. He was one of the top players in Rowan County as a senior and was named Central Carolina Conference Player of the Year. The only thing that’s changed for Lentz since the “accident” is that now he has unusual, moving testimony that he is always ready to share with any audience.

Growing up, Lentz attended Vandalia Christian Academy, a small private school in Greensboro, and basketball wasn’t a big part of his life. Baseball was his thing and he played for a Rowan-based team called the Longhorns that was formed by Jeff Link.  That team eventually became Extreme Performance, and Lentz’s teammates included Owen White, Austin Love, Hunter Shepherd, Juan Garcia, Bryan Ketchie,  Jeremy Simpson, Lee Poteat, Robbie Monroe, Caleb Link and Noah Jarrett, all of whom became standouts on the diamond.

Lentz is the only one of that group who chose the basketball path, but he still stars in baseball. As North’s center fielder, he’s one of the county’s top 10 players, and he’s exploring the possibility of playing American Legion ball for the first time this summer.

“From the time I was 9 until I was 12, it was all baseball,” Lentz said. “Baseball was really important as far as developing my hand-to-eye coordination for basketball.”

Lentz headed to public school at North Rowan as a freshman and was a startling surprise on North’s jayvee team. He was a natural basketball player with a textbook lefty jump shot. He recalls 40-point explosions on the jayvees, and by the end of that season he was seated on coach Andrew Mitchell’s varsity bench, watching studs such as Jalen Sanders, Michael Connor Jr. and Michael Bowman perform their magic. That North team was 2A state runner-up, finally losing to Kinston and current NBA player Brandon Ingram.

“After being at a little private school, it was a little intimidating being around guys who were so talented,” Lentz said. “But I learned a lot.”
Late in his sophomore season, Lentz started to stand out for a varsity team good enough to make the Western Regional. There was a 23-point game against Thomasville and a game against Salisbury in which Lentz drilled six 3-pointers.

Lentz gained more confidence playing against rugged AAU competition with Team F.L. Y. and appeared to be on the cusp of stardom, but a few months after a two-point regional loss to East Lincoln, it was time for Catawba’s  team camp. That’s when Lentz’s heart stopped, his career took a detour, and he basically had to start over.

He’s come an incredibly long way. He was a terrific all-round player as a senior, averaging 18 points and seven rebounds. He scored 20-plus points 12 times. Despite all that success, he wasn’t expecting to be named conference player of the year.
“That really meant a lot to me,” Lentz said. “I tried to keep a good work ethic, tried play hard, and tried to keep a good attitude all the time.”

Lentz is one of his head coach’s all-time favorites because Mitchell is a kindred spirit. He also was a lefty shooter who headed to Catawba after a fine career at North Rowan.

“Henderson is a great shooter, but he’s more than a shooter and more than just a great basketball and baseball player,” Mitchell said. “He’s an incredible person. He’s a self-motivated guy, the first to arrive at the gym and the last one to leave, and he’s willing to do anything he can do to help his team and his school. Always positive and always respectful. Henderson Lentz doesn’t just talk the talk,  he walks the walk. It’s a thrill to see him signing with Catawba. He can do great things.”

Catawba was involved with Lentz for a long time, even before it began to seriously recruit him. Catawba head coach Rob Perron spent many hours in hospitals during Lentz’s recovery period, and his concern for Lentz’s return to a normal life was real, even when it was questionable if Lentz would ever shoot another 3-pointer.

“Coach Perron was driving an hour to visit me, even when it looked like there might not be any more basketball,”  Lentz said. “I had some other offers (Queens, USC-Aiken, several Division III schools), but Catawba offers me the best chance to do positive things in the community beyond basketball.”

By the time Lentz’s video stopped playing, there weren’t any dry eyes in the room. Then he calmly sat down with his family. When he picked up a pen and grinned, cheers replaced the tears.

“Signing with Catawba is special,” Lentz said. “I’ll be playing in that same gym where so many things happened to me. I’m thankful for all of it.”