Panthers felt the need for speed in draft 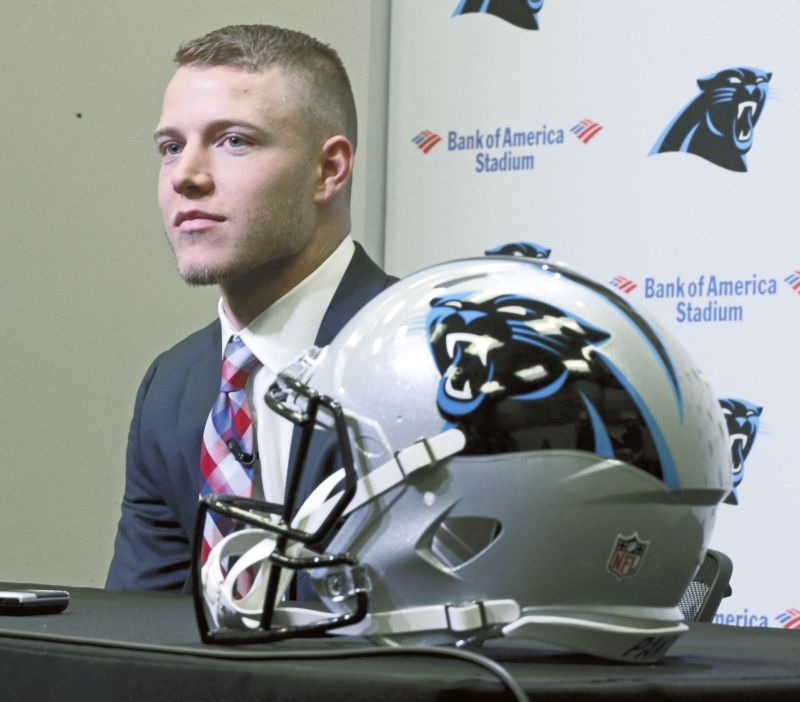 CHARLOTTE (AP) — One thing was fairly evident from the Carolina Panthers draft: They had a need for speed.

The Panthers added a pair of explosive players in Stanford running back Christian McCaffrey and Ohio State wide receiver Curtis Samuel with their first two picks.

That was clearly by design.

“When I was a high school coach I went to a clinic and on the board it said ‘speed makes geniuses of us all,’” Panthers general manager Dave Gettleman said. “You can’t coach speed. You can’t teach speed. A guy can run or he can’t. These first two guys can really run.”

While McCaffrey will be used primarily at running back and Samuel will work mostly in the slot, both will keep defenses guessing because of their ability to line up in a variety of positions.

McCaffrey led the nation in all-purpose yardage, contributing as not only a running back but as a receiver and returner, too. Samuel, whose position in college was simply listed as “athlete,” led the Big Ten in all-purpose yards doing many of the same things McCaffrey did.

Coach Ron Rivera said after watching highlights of last season it was evident the Panthers needed to add “vertical speed.”

“We get that right off the bat with Curtis. What you get with Christian (McCaffrey), you get the quickness, the speed across underneath and all that good stuff,” Rivera said. “It’s going to be a good tandem, a good combination. Throw into the mix Greg Olsen and Kelvin (Benjamin) and Devin (Funchess) and we feel really good about the potential for the playmakers in this group.”

Things we learned from the Panthers draft:

ELDER STATESMAN: Carolina selected Miami cornerback Corn Elder in the fifth round, making him the fourth cornerback selected by the Panthers in the last two drafts. He’s expected to add depth at nickel back behind recently re-acquired veteran Captain Munnerlyn.

WHERE HE FITS: Six-foot-2, 253-pound Alex Armah played defensive end, linebacker and tight end at Division II West Georgia, but the Panthers project the sixth-round pick as a potential replacement for two-time All-Pro Mike Tolbert at fullback. Although Armah hasn’t played fullback since high school, he said “I think that will be my best position” at the NFL level.

GETTING THEIR KICKS: For the first time ever the Panthers selected a kicker in the draft, taking Harrison Butker from Georgia Tech in the seventh round.

“You can’t worry about the other guy,” Butker said of the competition.

A former tuba player, Butker made only 71.7 percent of his field goals at Georgia Tech but made 88.2 percent last season.

INSURANCE POLICY: When the Panthers drafted Western Michigan offensive tackle Taylor Moton in the second round it gave them an insurance policy in case Michael Oher is unable to return from the concussion issues that plagued him last season. Oher missed 13 games and remains in the NFL’s concussion protocol, although he’s been working out with the team.

Moton has been as durable as they come, starting a school record 52 games over the past four seasons.

CAM IS ON THE PHONE: McCaffrey said receiving a call from quarterback Cam Newton after the draft was “one of the most exciting things I’ve done in a while.”

“Just to know that I have probably the most talented quarterback in the National Football League, who I’m going to be lining up next to, call me and talk ball and just welcome me to the family. … that was pretty cool,” McCaffrey said.

HALL WAS SHOCKED: Third-round pick Daeshon Hall, a defensive end from Texas A&M, admitted he didn’t think he would get selected as early as he did.

But the Panthers liked him so much they moved up 21 sports in the third round to get him at No. 77.

Hall said if it hadn’t been for his mother he might have switched sports. But he took her advice and continued to play football.

Rivera said Saturday after the NFL draft that the former first-round draft pick is a “little heavy” right now, but is working hard to lose weight during the team’s offseason conditioning program.

“We have talked about what he has to do and he’s done a great job with it,” Rivera said. “Am I concerned? Yes, because he is heavy. I will admit that right now. But is he working hard? Yes he is.”

Benjamin, who is listed as 6-foot-5 and 245 pounds on the team’s roster, has struggled with keeping his weight down in the past.

LAKE FOREST, Ill. (AP) — If their goal was to keep things interesting in the draft, the Chicago Bears sure did succeed.

They made a surprising move to trade up a spot and draft Mitchell Trubisky with the No. 2 pick and kept the surprises coming after that.

The Bears are banking on some big payoffs, and they have little room for error after finishing last in the NFC North at 3-13.

That’s what made their approach as surprising as it was bold.

They traded draft picks, took chances on players from unheralded programs. And when it came to the most important position on the field, they made sure they got the player they wanted whether it was the right move to make or not.