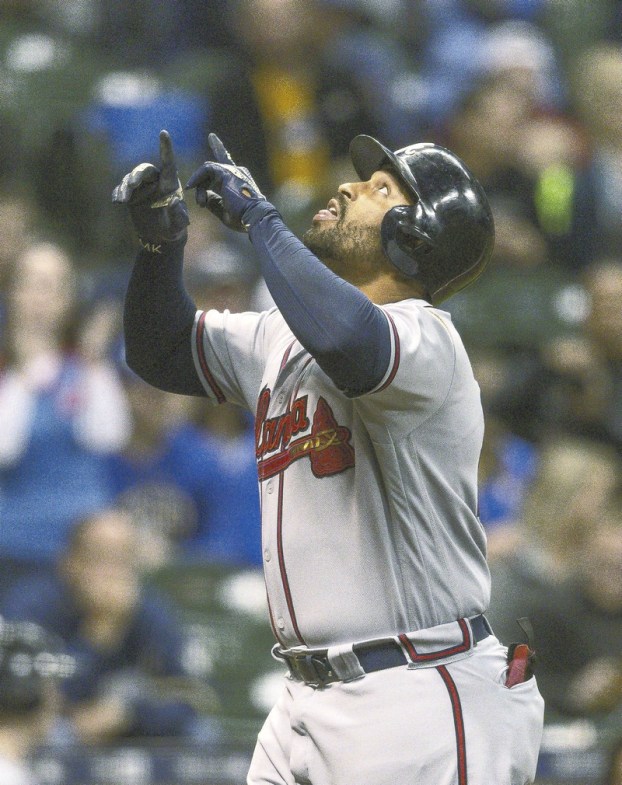 MILWAUKEE (AP) — Matt Kemp had a night like he’s never had before in his career. He was more than happy to share the good vibes.

“It was everybody’s night,” he said. “Everybody was swinging the bat well. That’s a good sign for us.”

The 32-year-old Kemp connected in the fifth, seventh and eighth for his first game with three homers. He became the first Braves player to accomplish the feat since Mark Teixeira in 2008.

Atlanta collected a season-high 20 hits in its fourth straight victory. Dansby Swanson also homered, and Jaime Garcia (1-1) pitched six innings for his first win with the Braves after spending the first eight years of his career in St. Louis.

“It feels to get that ‘W’ for me, but it’s better for the team,” Garcia said. “We’ve been playing really good baseball our last four games and I’m very excited.”

Kemp gave Atlanta a 5-1 lead with a drive to right with two outs in the fifth after Freddie Freeman’s broken-bat single against a shifted defense. He homered down the left-field line in the seventh and tacked on another two-run shot in the eighth.

“That’s how it supposed to be — guys picking up each other,” Kemp said. “That’s what good teams do.”

Swanson also hit a two-run shot in the seventh off Milwaukee’s beleaguered bullpen. With two hits on Saturday and three in the series, the touted prospect who has struggled to start the year improved his average to .149 this season.

Orlando Arcia’s at-bat in the fifth also ended when a fan wearing a Wisconsin Badgers pullover reached over the right-field railing and caught a foul ball that was ruled interference.

Braun also was ejected in the seventh for arguing balls and strikes.

The lone nifty defensive play for Milwaukee came from the loge level when a fan caught Brandon Phillips’ foul ball in the fifth with a cup of beer. He then downed what was left with the ball inside.

Phillips returned to Atlanta’s lineup after missing the past two games with a strained groin. He extended his hitting streak to 12 games in his first at-bat. Atlanta manager Brian Snitker said Phillips would sit for Sunday’s game and return to the lineup on Monday.

Braves: RHP Mauricio Cabrera, on the DL with elbow soreness, pitched two innings at Class A Florida. He is headed to Triple-A Gwinnett on Tuesday.

Brewers: X-rays were negative on Shaw’s right hand after he was hit by a pitch in the first. He left in the fifth because he couldn’t grip a bat effectively.