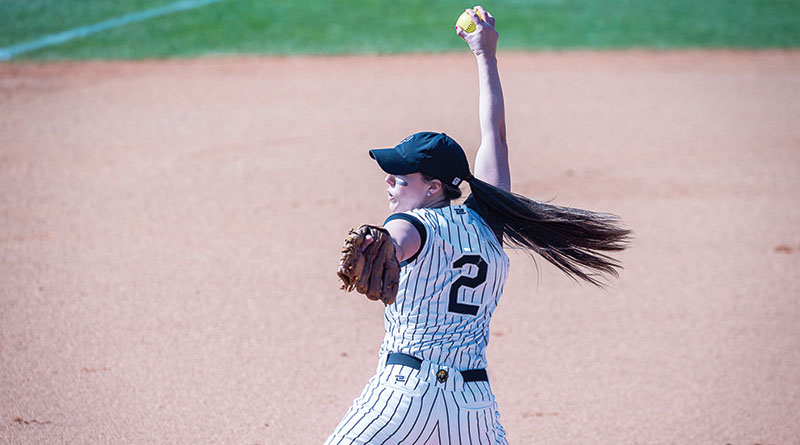 MISENHEIMER — Pfeiffer University is 15 miles from Sydney Poole’s house, so it was the comfortable place to go for an East Rowan graduate whose life is centered around family and friends.

The North Piedmont Conference Pitcher of the Year as a senior in 2013, Poole might have opted for a bigger school, but Pfeiffer offered the degree she wanted and she figured to get playing time for a decent team as a freshman.

Poole’s hobbies (sewing and shopping) and boyfriend (East grad Roby Holmes) are the same ones she had in high school, but a lot of other things changed. Coach Monte Sherrill, who coached 26 straight conference champs and 10 state-title winners in high school, arrived at Pfeiffer prior to Poole’s junior year. So the Pfeiffer program is no longer just decent. It has mushroomed into a national Division II power — currently 40-4 — and Poole has achieved remarkable things. She’s 13-0 in the circle as a senior and she’s 20-2 in Sherrill’s two seasons.

“I never really thought when I came to Pfeiffer that something like 40-4 was possible,” Poole said. “All the goals I set as a softball player were team goals, so we’ve far exceeded anything  I could ever have imagined.”

Poole has pitched in 24 games as a senior, performing in a wide range of roles. She’s started six games. She’s closed games. She’s appeared in middle relief and long relief. On Wednesday against Belmont Abbey, the call to the bullpen was issued early by Sherrill. Poole, a 5-foot-9 right-hander, relieved with two outs in the first inning. She was still out there at the end of a 6-2 victory.

It was emotional, likely Poole’s last appearance in the circle at Pfeiffer’s Jack Ingram Field. Pfeiffer is ranked fourth in a national poll, but it’s sixth in the official Southeast Regional poll that includes the South Atlantic Conference and Peach Belt Conference teams. That means Pfeiffer, top-seeded for the Conference Carolinas Tournament in Burlington this weekend, probably won’t play another home game.

“Knowing it was going to be my last game, the Belmont Abbey game was awful as far as my emotions,” Poole said. “I was trying to get through that last inning and it felt like there was a softball caught in my throat. Our catcher (Rachel Crowder) has been with me for four years, and there were tears in her eyes, and I was crying, too. When the got the last out, it was such a relief.”

Sherrill was excited that Poole was the winning pitcher in Pfeiffer’s 40th win. That victory broke the school record of 39 the Falcons set last  year.

“She’s my go-to pitcher, and when we get in trouble, no matter what inning it is, we get Sydney in there,” Sherrill said. “She gets nervous, but she’s one of those people who can just handle pressure situations really well. She doesn’t strike out a lot of people, but not many people hit the ball hard off her, either. She spots it on the outside corner or she gets it in on their hands.”

While she’s just one of five Pfeiffer pitchers, Poole now ranks third in Pfeiffer history in career wins (37) and fifth in strikeouts (216). She’s 10th in ERA (2.78) and in the top 10 in the record book in appearances, starts and innings pitched.

Poole’s big sister, Katelynne, was a basketball star at East, scoring over 1,000 points. Sydney finished a few points shy of 500 on the basketball court, but softball was her thing.

She played for coach Mike Waddell at East and was All-Rowan County four straight seasons. Her freshman and sophomore years were spent as the second baseman, part of the supporting cast for the county’s top stars, pitcher Chelsea White and shortstop Ericka Nesbitt. Those two led the Mustangs to two Final Fours in Raleigh before heading to Division I schools.

Her last two years at East, the spotlight shined on Poole, and she blossomed as a team leader. Her senior year, she led East to the third round of the 3A state playoffs. Besides being NPC Pitcher of the Year, she was runner-up to Carson’s Sidney Grkman (UNC Greensboro) as Rowan County Player of the Year.

When Poole filled out a “Meet the Players” form for the Post as a senior, the three words she said best described her weren’t a surprise: “tender-hearted, kind and dedicated.”

But her favorite quote wasn’t tender-hearted: “Hate to lose more than you love to win.” There was a surprising toughness and competitiveness about her, and those attributes have served her well in college.

Poole started often for Pfeiffer her first two seasons and went 7-10 as a freshman and 10-6 as a sophomore.

Then Sherrill’s arrival changed the course of Pfeiffer softball. An ex-Marine who had played baseball at Pfeiffer for legend Joe Ferebee, his first order of business, even before the 2016 season started, was reshaping and upgrading Jack Ingram Field.

“When I got here, I wanted to build this, knock this down, move this,” Sherrill said. “I’m sure a lot of people thought I was crazy, but stone by stone we changed things. One of the first people I tried to get on my side was Sydney Poole. It didn’t take long to figure out everyone in this community likes Sydney.”

Poole and her teammates weren’t construction workers, but they learned some new skills.

“Not many of us had ever cut sod before,” Poole said. “But the field started looking great. We were proud of it, and we feel like we are part of it.”

Sherrill also started reshaping Pfeiffer’s team to look like his championship squads at Alexander Central and Central Cabarrus. His players wear caps, pinstripes and eye black and they are taught to play softball like the most aggressive baseball players.

Poole made adjustment to practices that were long (three hours, maybe four hours on a Saturday) and tough.

“Practice intensity changed,” Poole said. “I grew up playing travel ball for my dad (Brian) and Ray Graham, and they are soft-spoken people. Coach Sherrill has a little different personality. Our hitters get 200 swings in a practice. We work on our pitching, mostly on our spins, but the pitchers also do a lot of fielding practice. I’ve never had so many balls hit so hard at me in such a short time. Coach Sherrill has pushed us really hard, but I wouldn’t change any of it. Practices have been so challenging that the games are almost relaxing. We are prepared for every situation.”

The bottom-line results, when it comes to wins and losses, have been there, just as they always have been for Sherrill, who loves to coach and lives to coach.

Poole went 5-0 in February, including winning both games in a tough doubleheader against Columbus State. She was 4-0 in March and 4-0 in April. Her season high for strikeouts is eight.

“People may not realize how good an athlete Sydney is,” Sherrill said. “She’s quick as a cat, so she can really field her position. She starts double plays and she covers and backs up bases. She’s played infield and outfield. We don’t have a big roster (17 girls), so she’s the backup at a lot of different positions. And 20-2 pitching for us the last two years? That’s just unheard of.”

Pfeiffer has won 13 of its last 14 games with steady contributions from Poole.

“Our defense is so talented that when I make a pitch, I don’t even turn around to look anymore,” Poole said with a laugh. “I know we’re going to make the play.”

Poole has been an exceptional student, served as a junior marshal, and will graduate on May 13. Her major is exercise science with a minor in psychology. Next will be occupational therapy school.

But there’s still some softball left to play. And while her realistic goals have been reached and surpassed, now it’s time to work on the dreams.

Pfeiffer lost 1-0 in the regional final last season against Armstrong, and the Falcons, who have added some fantastic freshmen, are better than last year.  That means Poole may have a chance to finish her career in huge games.

“School and softball have been wonderful for me,” Poole said. “My time at Pfeiffer,  I would never trade it for anything, and I’d do it all over again. I just wish I had one more year.”