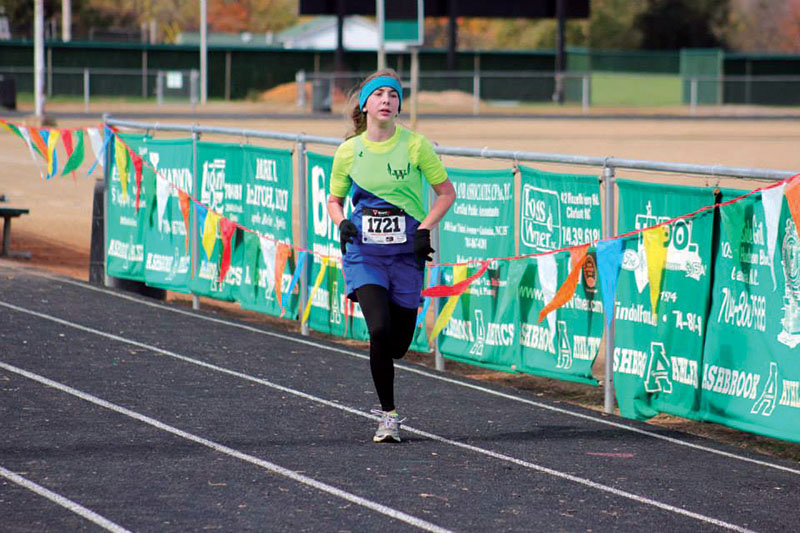 Another young star with a bright future

One of the highlights for me this past week was watching another Boston Marathon on TV. As usual there were some huge sub-plots to the actual race. Most interesting to me was the 50th anniversary of Katherine Swisher becoming the first woman to complete the race. Race organizers tried to physically remove her from the course but didn’t succeed. At the time, women were often thought of as not able to handle such physical exertion. The 70-year-old Switzer ran the race again this year amid huge honors, rightly recognized for her contribution to the sport. Today, both locally and nationally, women in races usually outnumber the men. Women often compete for overall championships in extreme events of 100 miles or more.

A young local female runner has served notice that she is ready for another fantastic road racing and cross country season.

Leah Cressler recently finished a stellar track season. Although she was the Central Carolinas Conference female cross country champion and Runner of the Year for 2016 as a freshman at Salisbury High, Leah recently stepped up with a strong third against a very good adult women’s field at the Rock Your Socks for Knox 5K on April 9. This was on a day when her older competitors were challenged by the first warm afternoon race. Leah said, “I really didn’t think much about who I was running against. I just wanted to go out and do my best and have fun. My parents often remember the other runners better than me. My mom told me to keep Kelly Lowman in sight and I remember beating Melissa Orr at the Santa Run.”

Leah came to running after training as a swimmer for about six years and felt it was time for a change. YMCA Warriors coach Ester Marsh invited Leah and her mom, Lori, to come try running. Leah said, “I tried it for two weeks and I never left after getting to know what I was doing and being around others interested in running, I remembered an early memory of asking a neighbor to time me when I ran around his house.”

Ester and Kevin Marsh continue to develop outstanding young athletes through the YMCA Warrior program. They coach cross country in the fall and track in the spring, instilling both a solid training ethic and developing competitiveness as the team travels regularly for meets against other strong programs.

Leah said, “My favorite thing about running is the support that I get from my coaches and teammates and anyone just watching me run. It is always nice knowing that I have people rooting for me. My favorite coach and biggest supporter is Kevin Marsh from the Warriors.” Leah also credits Tim and Sallie Pittman, her Salisbury High School cross country coaches.

Other interests for Leah besides running include drawing, writing, playing guitar and singing. She said, “I have quite a few interests other than running. Drawing is the hobby that I practice most and I am not too bad at it.”

As far as her future in running, Leah doesn’t seem too stressed about high expectations. She said, “My hopes for the future are fairly simple. I don’t have many big plans and I really want to ‘go with the flow.’ I just want to see what I can do and how far I can go. I hope to just keep growing and improving.”

Leah still has plenty of time to decide about her future away from running but she is interested in science and may do something with that. No doubt, I predict lots of running successes in the meantime.

Late April and May are very busy with races locally. The Millbridge Elementary 5K is up first this coming Saturday, April 29. The Buck Hurley Triathlon and first time separate 5K is early on Sunday, May 7 and the popular TWAM 5K follows on Friday evening, May 12. Look for these and other events at salisburyrowanrunners.org