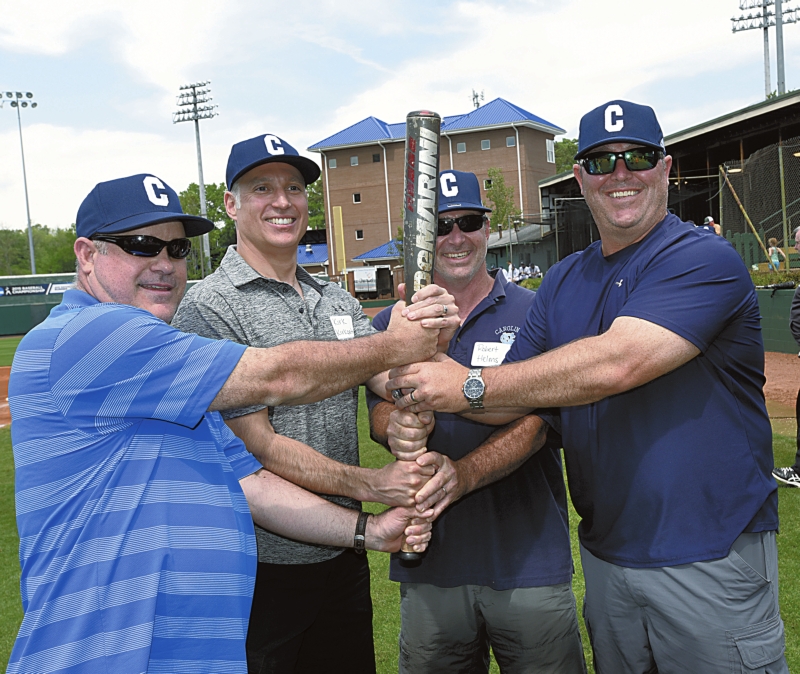 Wayne Hinshaw/for the Salisbury Post ... Four members of the 1992 Catawba baseball team, from left: Paul Benfield, Kirk Kirkpatrick, Robert Helms and Todd Blake, recreate a photo that was in The Post 25 years ago.

SALISBURY — The team was close. Most of their scores weren’t.

Catawba’s 1992 baseball team was honored at Newman Park on Saturday between games of a doubleheader. That’s still the only baseball team to go through a South Atlantic Conference regular season with an unblemished record.

The Indians took the field 21 times against SAC opponents in March and April, 25 years ago. They ran the table.

“It really was something, the kind of thing that doesn’t happen often,” said Brian Hightower, East Rowan High’s current head coach and a junior second baseman on the 1992 Catawba squad. “Undefeated and baseball just don’t go together. But that was a special team. No one cared about individual stats. The only stat that mattered  to us was 21-0.”

The team derived much of its feistiness from Hightower and shortstop Matthew Poole, who was 29-for-29 stealing bases and struck out just four times in 151 at-bats.

“You think Hightower is fiery now?” chuckled Catawba head coach Jim Gantt, an assistant coach on the 1992 team. “He was double that in 1992. That team was competitive.”

Dick Williams, who was a 63-year-old head coach in 1992, passed away in 1999. One of the 1992 Indians, East Rowan graduate Jon Bost, died in 2005. But most of the immortal team was re-assembled at Newman Park on Saturday. The mound is taller and a higher outfield wall graces the cozy old field now, but it’s still Newman Park, and memories came flooding back.

“We loved playing baseball more than anything in the world and I remember that we’d stay two or three hours after practice to keep hitting in the cage,” said Brad Strauss, a slugging third baseman who had the same sort of dream season in 1992 that Luke Setzer is having for the Indians this year.  “Coach Williams would have to tell us, ‘No cage today,’ and then he’d run us out of there.”

Catawba was good in 1991 (27-14), but was picked sixth in the SAC preseason poll for 1992. That lack of respect from the league would provide fuel for what transpired.

Opening day in late February against Belmont Abbey set the tone. Catawba had just two hits going to the ninth inning. With one out in the ninth, Hightower decided he was getting on base by any means necessary.

“Brian and I were inseparable, and I still remember him leaning into a pitch, getting hit on purpose, to get on base,” Strauss said.

Kirk Kirkpatrick walked with two men out to extend the game. Then All-SAC outfielder Aaron Kanner belted a three-run, walk-off homer that had fans dancing in the bleachers.

After that comeback, there was a reasonable belief that no deficit was insurmountable. The Indians would go 38-7 overall (highest winning percentage in the nation) and wouldn’t lose at Newman Park all season.

Catawba won its first five outings before losing a non-conference game at Limestone on March 5. After that setback, the Indians embarked on a 17-game winning streak that remains the school record. Loss No. 2 wouldn’t come until the Indians fell at Belmont Abbey on April 1.

Those were simpler times.

“We only had one or two uniforms and we rode in vans to away games,” said Paul Benfield, who went 7-1 on the mound for the 1992 Indians as a senior. “As a co-captain, I got to drive one of the vans. We took a meal with us,  in paper bags from the dining hall. A ham sandwich, a cookie and an apple.”

When the Indians went to Appalachian State and crushed the Mountaineers, 18-4, some Indians hoped for a promotion from baloney sandwiches to steaks, but that’s when Williams uttered one of his more memorable quotes.

And so the Indians continued to hunt.

Williams was a laid-back coach. Before arriving at Catawba, he’d coached football for three decades at East Mecklenburg High in Charlotte.

“Well, he definitely was a player’s coach,” Benfield said. “We liked him. We played hard for him. We would’ve run through walls for him.”

But chemistry probably was even more vital than talent.

“We didn’t just play baseball together — we lived together,” Hightower said.

Added Strauss, “There was no butting heads, no tension over who was playing or not playing. Guys understood roles and accepted them. When we weren’t playing ball together, we were playing spades together or watching movies together.”

As the season pushed into mid-April, the Indians maintained their perfect mark in the SAC by whipping the Lenoir-Rhyne Bears on the road to move to 18-0. They would close the regular season on April 17-18 against the league’s defending champion — Carson-Newman — at Newman Park.

Catawba out-slugged the Eagles, 10-7, in the Friday game. Then Helms won the first game of the Saturday doubleheader, 3-2.

But the second game of the doubleheader would present unexpected challenges.

Benfield was charged with four quick runs and got only two outs in the first inning before Williams turned to reliever Jim Basinger. He saved the day — along with Catawba’s bats. Strauss hit a home run in a 12-7 victory that made the team part of history.

“My teammates picked me up that day,” said Benfield, a former pitching coach who has worked for Show Show the last 15 years and now lives in Faith.  “But that’s the way it was that whole season. We were like brothers.”

That was the day the season peaked. The Indians stood 35-3 and were ranked 13th in the country.

In the SAC tournament hosted by Gardner-Webb, the Indians would win twice, but they would lose two games to Carson-Newman.

The 12-day layoff between the conference and district tournaments didn’t help the Indians. They’d lost some of their edge and had been bitten by the injury bug.

“Our bats went ice-cold, all of us,” said the 46-year-old Strauss, who is a sales rep in New Jersey. “It still haunts me that we didn’t go to the World Series that year. We had the team to do it.”

“I’m not saying we paved the way for what Catawba baseball has become,” Benfield said. “We’re just part of a great tradition.”

Wingate made a run at perfection in 1995, going 20-1. Catawba was responsible for the Bulldogs’ lone loss. No one else has seriously threatened.

“I’m proud that something we did 25 years ago is still remembered,” said Benfield, the SAC Scholar-Athlete for all sports in 1992. “Someone might tie our record someday, but no one can ever beat it.”