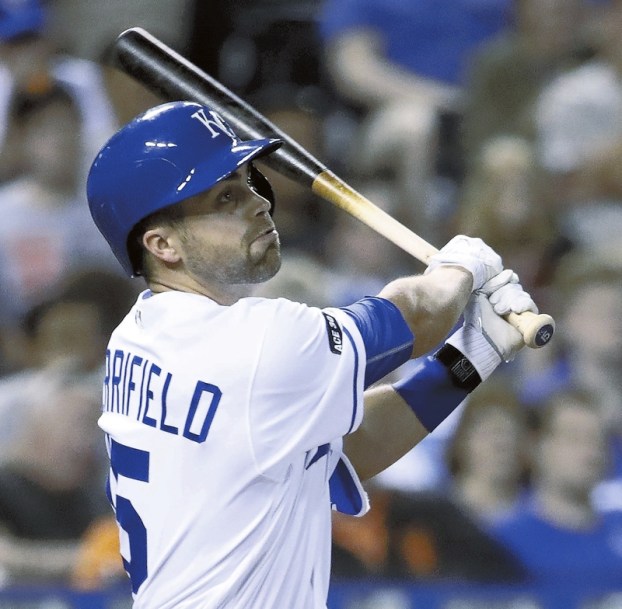 Merrifield homers in return to majors but Giants prevail, 2-1

Nick Hundley doubled off Scott Alexander (0-1), the Royals’ fifth reliever of the night, before Panik’s sharp liner dropped in front of center fielder Lorenzo Cain to score the go-ahead run.

Derek Law (1-0) pitched two scoreless innings of relief for San Francisco, and Mark Melancon struck out Raul Mondesi with runners on first and second in the 11th for his third save of the year.

Whit Merrifield (Davie County) homered in his return to the majors from Triple A, accounting for the Royals’ only run.

Atlanta scored a run against Nationals closer Blake Treinen and had the bases loaded with one out. But Shawn Kelley came on for his first save, getting Emilio Bonifacio to fly out to short right field and striking out Chase d’Arnaud — twice, actually — to end the game.

D’Arnaud clearly missed a pitch in the dirt, but the umpires gave him a second chance by inexplicably ruling it a foul tip. D’Arnaud made it a moot point, swinging and missing again.

Scherzer (2-1) got an inning-ending double play to work around his only serious trouble in the fourth. The 2016 NL Cy Young Award winner allowed only one other runner as far as second base, finishing with seven strikeouts.

Mike Foltynewicz (0-2) ended up on the short end of the pitching duel. He went seven innings, allowing five hits and a pair of runs.

Washington’s Adam Eaton kept up the hot start for his new team with an RBI single.

Sparked by the debut of their new suburban stadium, the Braves swept San Diego in a four-game series and came in having won five straight overall, getting back to .500 after a 1-6 start.

But Washington has dominated its division rival over the last two-plus season, improving to 37-13 over their last 50 meetings.

Even on a balmy night for the opener of a three-game series against the defending NL East champions, the crowd of 21,834 was the smallest in five games at SunTrust Park.

The Braves had their best scoring chance against Scherzer when Freddie Freeman led off the fourth with a walk and Nick Markakis followed with a single to center.

Brandon Phillips grounded into a forceout, leaving runners at first and third for Adonis Garcia. On a 3-1 pitch, he grounded sharply to shortstop Wilmer Difo, who started an easy double play to end the inning.

Washington broke through the very next inning. Matt Wieters got it started with a double, went to third on a wild pitch and trotted home when Difo slapped a single to right. Scherzer moved the runner along with a sacrifice bunt, setting up Eaton’s run-scoring hit to center.

The Nationals added an insurance run in the eighth on doubles by Bryce Harper and Ryan Zimmerman.

NEW YORK (AP) — Cameron Rupp drove in the tiebreaking run with a sacrifice fly and the Philadelphia Phillies scored four times in the 10th inning to beat the scuffling New York Mets 6-2 on Tuesday night.

Odubel Herrera homered early for the Phillies, who took advantage of a pivotal error by third baseman Jose Reyes and handed the Mets their fourth straight defeat. Reyes dropped a two-out popup in the eighth inning before Andres Blanco tied it at 2 with an RBI double.

CHICAGO (AP) — Kyle Schwarber and Miguel Montero each hit a two-run homer, Albert Almora Jr. and Jon Jay added run-scoring hits in a four-run sixth inning and Chicago rallied from five down in a win over Milwaukee.

Wade Davis got his third save and the bullpen retired 15 of its final 16 batters as the Cubs snapped a four-game skid.

The Brewers staked Jimmy Nelson to a 5-0 lead in the third, but the right-hander couldn’t make it hold, allowing seven runs and nine hits in 5 1/3 innings. Reliever Jared Hughes (1-1) took the loss.

The 40-year-old Arroyo (1-2) allowed three runs in five innings, including Adam Jones’ two-run homer in the fifth. The victory was Arroyo’s first since June 15, 2014, for Arizona against the Dodgers. That was his last appearance before elbow and shoulder injuries knocked him out of action until this month. The longtime Red got his first win with Cincinnati since Sept. 22, 2013.

Seung Hwan Oh allowed three hits in the ninth but escaped a one-out, bases-loaded jam for his second save.

TORONTO (AP) — Brian Johnson earned his first major league win after being called up from the minors earlier in the day, Mookie Betts hit his first home run of the season and Boston hung on to beat the Toronto for its season-high fourth straight victory.

Johnson (1-0), promoted Tuesday morning from Triple-A Pawtucket, gave up four runs and seven hits and struck out six in five innings. He lost his only other start, at Houston on July 21, 2015.

Andriese (1-0), who had lost seven of nine decisions dating to last June 25, allowed one run and four hits over six-plus innings. He retired 12 straight during one stretch.

Miguel Cabrera homered on his 34th birthday for the Tigers.

Francisco Lindor broke the game open with a two-run triple in the sixth and struggling slugger Edwin Encarnacion also went deep for the Indians. Tomlin (1-2) allowed seven hits and struck out two after entering the game with an 18.47 ERA from his first two starts.

HOUSTON (AP) — Albert Pujols hit a tiebreaking three-run homer in the fifth inning to give Los Angeles a victory over Houston and snap a six-game skid.

Angels starter Ricky Nolasco (1-2) yielded eight hits and two runs in six innings to improve to 5-0 in six career starts against the Astros. Cam Bedrosian got the last six outs for his third save.