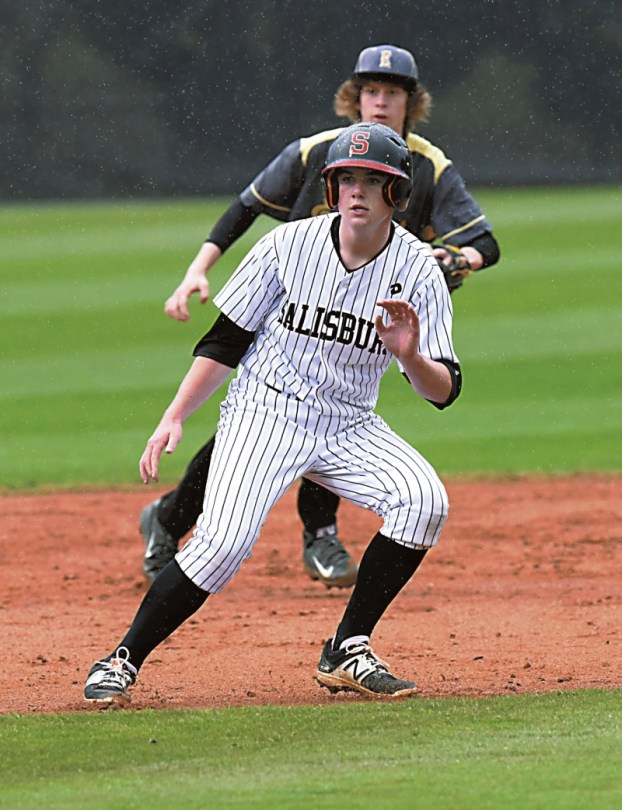 Plus, the Dragons were mashing it.

It all added up to a surprisingly easy, 14-2 drubbing in five innings at Feezor Field as the Dragons maintained their hold on first place in the Central Carolina Conference.

Doulton Anderson went 4-for-4 with three RBI to lead a 15-hit assault on two Salisbury pitchers, including starter Griffin Myers, who was 4-1 with a 1.41 earned run average coming into the game. Chris Mauck and Austin Ferguson were both 3-for-3 with two RBI for the Dragons.

“Our kids did well,” said West coach Jason Lemley. “They had a great approach against a very good pitcher in Myers. They got some good pitches to hit early. We were fortunate that they made some mistakes that gave us extra ABs and outs.”

The Hornets, who fell to 11-8 overall and 5-2 in the conference, committed four errors and they all hurt. Salisbury was also playing its fourth game in five days.

West got jump-started with a 4-0 lead in the first. All four runs scored directly on three Salisbury errors.

“We made more errors tonight than I’ve seen in a month,” said Salisbury coach Mike Herndon. “That’s not the team I’m used to seeing.”

Preston Dalton (6-0) was the winning pitcher, allowing seven hits while striking out seven and walking one.

Salisbury briefly worked its way back into the game. Zach Robinette, who was 2-for-2, singled in a run in the second. Myers, who was 2-for-3, doubled in the third and scored on Chandler Lippard’s single to cut the lead to 4-2.

Austin Gobble, who was 2-for-3, led off the bottom of the third with a single. He was then safe at second due to a throwing error when Dalton hit a grounder. That proved to be combustible because by the time the Hornets recorded an out, West had scored seven runs against Myers and reliever Will Taylor to blow the game wide open.

Ferguson had a two-run double and Cason Fowler added a two-run single to lead the way. Jake Adams, Mauck and Anderson each singled in a run.

Myers was charged with seven runs on seven hits in two-plus innings. Six of the runs were unearned.

The Dragons continued their onslaught with three more runs in the fourth on Anderson’s two-run doubled and a run-scoring single by Mauck.

“We’ve been practicing a lot, working on backside, hitting up the middle more,” Mauck said. “It’s all in Lemley. He helps us work it.”

“They’re a dang good baseball team,” Lemley said. “They really are. They’re just as likely to beat us 14-2 on Friday.”

Mike Duprez can be reached at sports@the-dispatch.com.